Data released by New York State shows that about 20 percent of the defendants released since the state eliminated cash bail for most misdemeanors and nonviolent felonies were charged again with other crimes before their original prosecutions were completed, but only a small number with violent felonies.

The data, released in December, includes 284,100 arraignments from Jan. 1, 2020, when bail reform took effect in New York state, to June 30, 2021. It has only cases from criminal courts in New York City; 61 city courts outside New York City (including Beacon’s); and two district courts.

The same pattern held at the Beacon City Court. Of 212 people released at arraignment, 20 were arrested on new misdemeanor charges, seven accused of new nonviolent felonies and three charged with new violent felonies. 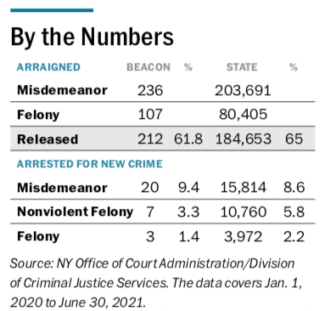 Advocates highlighted the data as evidence that a large majority of defendants do not commit new crimes after they are released without bail. Laurie Dick, a Beacon resident and attorney for the Legal Aid Society of New York City, said her clients make their court appearances “at least as reliably as they used to,” without being rearrested.

She highlighted one case as an example of the need for bail reform: a man who, exiting a train in Brooklyn while heading home from work, was stopped by police and told he fit the description of someone who had committed a nearby robbery. If he had not been released because of bail reform, he could have been jailed and lost his job, she said. Video she subpoenaed showed that the robber could not have been her client, but the case took four months to resolve, Dick said.

Still, the state Legislature’s Democratic majority may do some “tweaking” to the law during the current session, said Jonathan Jacobson, whose Assembly district includes Beacon.

Republicans and police officials opposed to the law are hoping for more than a tweak as they wage a public campaign that casts bail reform as a threat to public safety and a driver of violent crime.

Locally, violent crime dropped slightly in Beacon and Dutchess County during 2020, the first year of bail reform, according to the most recent data from the state Division of Criminal Justice Services.

The law is “leaving victims vulnerable,” said Serino, who has introduced legislation that would allow judges to consider a defendant’s threat to public safety in determining whether to impose bail.

“No one here today believes that any New Yorker should be held behind bars simply because of an inability to pay, but all of us believe that ensuring public safety, and protecting the most vulnerable among us, is a fundamental function of government,” she said.

The state is “slow-rolling” access to data about who is being released “because when you get into it, you realize that they have compounded a problem,” said Molinaro during the press conference. “We ought to be evaluating the data every day.”

The next day, Molinaro released a memorandum addressed to Mary Ellen Still, chair of the Dutchess County Criminal Justice Council. He asked that the council research how Dutchess could create a daily report similar to one ordered by Bruce Blakeman, the county executive for Nassau County on Long Island, that requires police to publicize data on defendants who are arrested again after being released under bail reform.