A group of Republican voters sued last week to overturn new congressional districts approved by the state Legislature and Gov. Kathy Hochul, saying they are designed to flip seats held by their party. They cited District 18, which has been represented since 2013 by Rep. Sean Patrick Maloney, a Democrat who lives in Philipstown, as an example.

In the 67-page lawsuit, filed Feb. 3 in state court in Steuben County, the plaintiffs claim that Democrats “brazenly enacted a congressional map that is undeniably politically gerrymandered” and violates the state constitution.

Each of the plaintiffs says he or she lives in a congressional district where Republican votes will be diluted or rendered meaningless because Democrats moved the party’s voters into Republican-leaning areas or packed Republicans into one district. The lawsuit also alleges that some of the new districts deviate from the goal of having 776,971 people in each one.

The boundaries approved by the Legislature move “strongly Republican areas,” such as Putnam Valley, Carmel, Yorktown and Somers, into District 16, which has Democratic strongholds like Mount Vernon and Yonkers, said the plaintiffs. They charge that this change is intended to make the 18th a safer district for Maloney.

“Congressional District 18 is now oddly shaped, like a sitting dog,” said the plaintiffs. 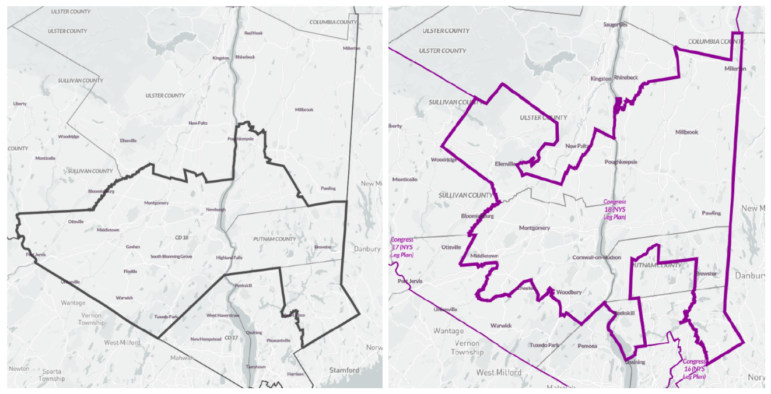 The lawsuit also cites District 19, where incumbent Rep. Antonio Delgado is being challenged by Dutchess County Executive Marc Molinaro. The plaintiffs say Democrats “shopped for Democratic voters” to turn the district from Republican-leaning to one with a Democratic advantage.

Republicans hold eight of New York’s 27 U.S. House seats. The new map has 26 districts because the state lost one seat because of population shifts in the 2020 census. The new boundaries are expected to give Democrats 22 of 26 seats.

The lawsuit asks the court to adopt a new map or order the Legislature to create one.

The Legislature took over the redistricting process after a 10-member commission approved in 2014 by voters, and filled with four members appointed by Democratic leaders and four by Republicans, failed to agree on a single map.