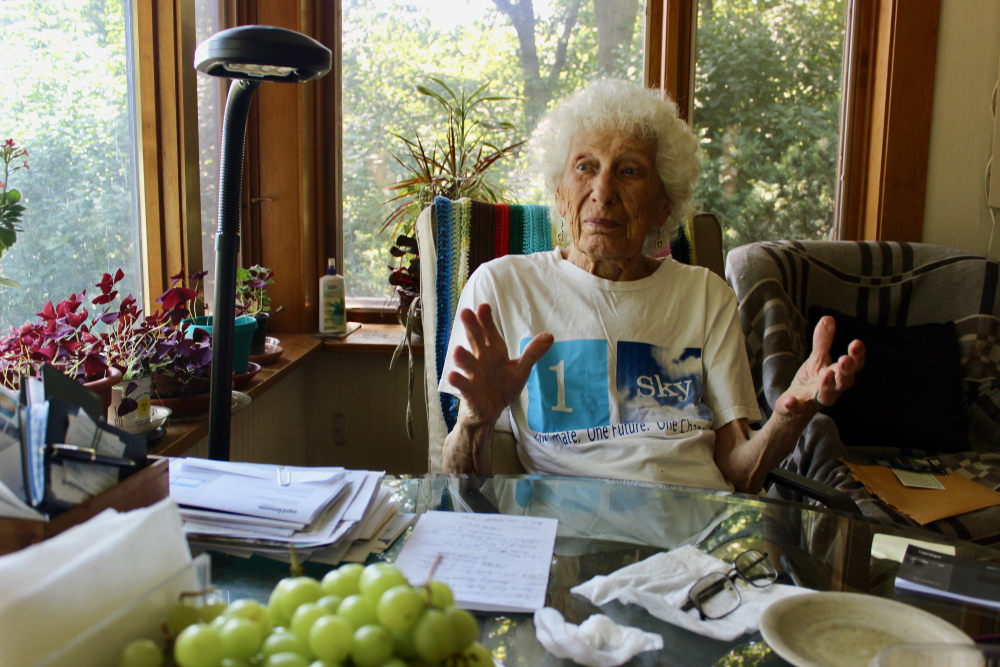 Connie Hogarth in her home office in 2019 (Photo by A. Rooney)

In her 95 years, Hogarth worked to ban the nuclear bomb, stop the Vietnam War, end racism, abolish the death penalty, impeach a president (Nixon), end apartheid in South Africa, close the Indian Point nuclear plant, create a Palestinian state, defend the Bill of Rights and slow global warming as a founding member — 18 years ago — of the Climate Crisis Coalition.

A longtime Democratic organizer who guided Jesse Jackson through two presidential runs and helped revive the Southern Dutchess NAACP, she co-founded and served for 23 years as director of the Westchester People’s Action Coalition until her retirement in 1996 at age 69. In that time, she was arrested at protests about 20 times, in both New York state and Washington, D.C.

Soon after her retirement, Manhattanville College in Purchase established the Connie Hogarth Center for Social Action. Her second husband, Art Kamell, died in 2010.

I interviewed Hogarth for The Current in July 2019. Our conversation, edited for clarity and brevity, is below.

What was your first experience with activism?I was 7. My father was a film projectionist and his union was picketing. My mother sat in the car with my younger brother while I walked the line. That early experience of walking the picket lines of a strong union made a real impression. There was always union talk at dinner. The whole concept of unionism was so deeply imbued that it has stayed there for my whole life.

Your organizing has ranged from marches with millions to vigils with a handful of participants. Does the small stuff count?For both Pete [Seeger] and [historian] Howard Zinn, there was the concept that every little thing you do is important. Even if it’s five people in a Hiroshima Day peace vigil on Route 9D, you feel the power of doing something. There is a strength that motivates and turns these activities into larger ones. From age 7 to nearly 93, with much in between, at many points you begin to wonder. Yet there’s a sense of never giving up. Change is possible, but it’s not always within arm’s reach.

In the cause of non-violence, I’ve been arrested more times than I could count. But these are elemental in my life: peace and non-violence. One action moves on to the next. We all have this power. Letting go is not acceptable. 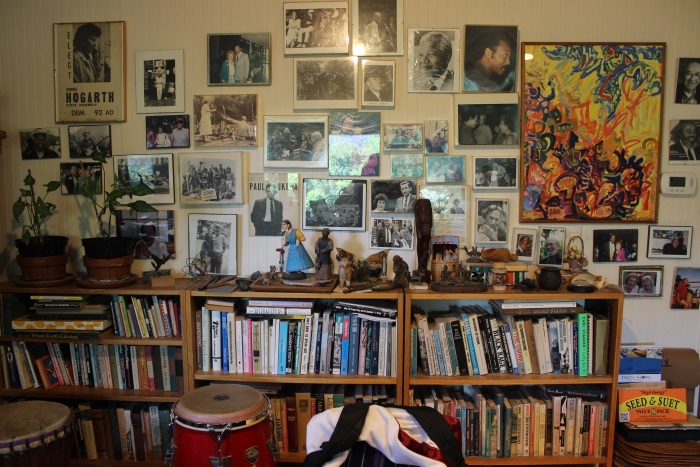 Connie Hogarth’s wall features mementoes and photos of her friends and heroes. (Photo by A. Rooney)

Is it important to strategize for both the short- and long-term?

Closing Indian Point was a major concern of mine, and it’s amazing that it will close in my lifetime. There were often just two of us at the [Nuclear Regulatory Commission] hearings; two of us going to D.C. It’s been a 40-year struggle. I didn’t miss a single NRC meeting. We’d get up and say: “How can you sleep at night?” People often ask me, “How could you be involved, not knowing if you would ever see it happen?” You should know that you probably won’t succeed right away. You have to take a long-range view [and fight] even if you don’t live to see it.

The power of one’s commitment is in how it radiates, or gives strength. You can’t opt-out; it’s not allowed. When you look ahead, you also have to look at what you have accomplished. Young people may feel negative about President Trump, for example, but also positive because they are feeling conviction.

Look at [Nelson] Mandela: To have come through what he went through [being imprisoned in South Africa for 27 years], with hope, is an extraordinary lesson in what we can learn; it’s not based on anger or fear. I never experience burn-out. 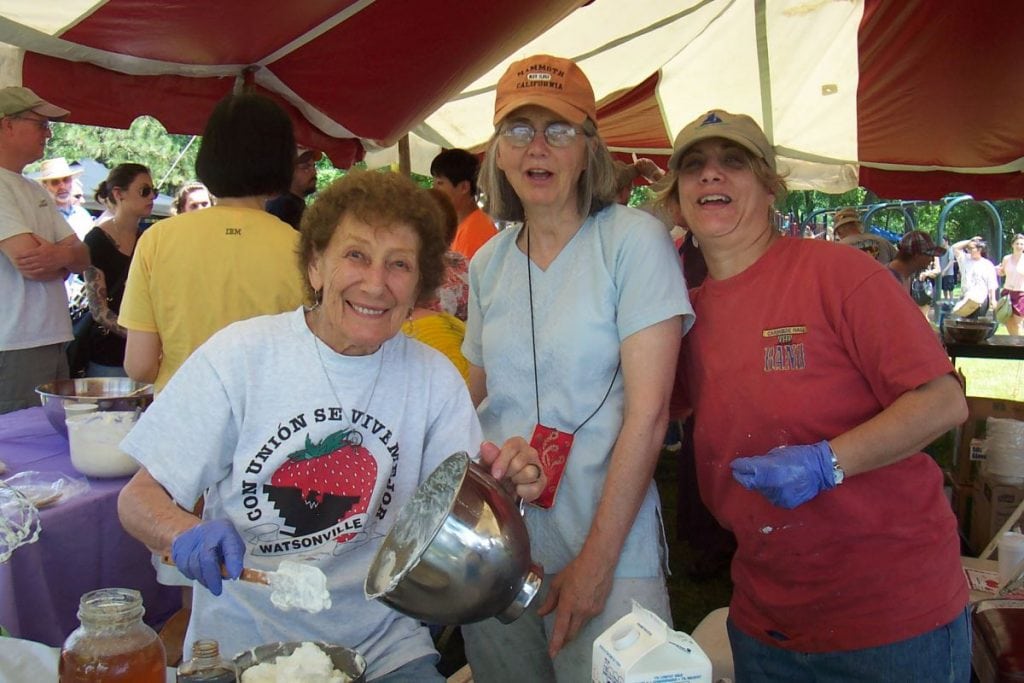 What are your current projects?The [Manhattanville College] center was my “non-retirement.” I was down there every week, mentoring students. I’ve seen my role over the years as motivating young people, being their nest for when things were a struggle — gays, lesbians, women’s rights. The center provides a summer internship at political organizations. That’s been going on for 10 years and will continue.

The ACLU [American Civil Liberties Union] is a big part of my life. I’m on the board of the Lower Hudson chapter. Every fall, for 18 years, the center and the ACLU have sponsored a lecture on the death penalty or other aspects of criminal justice. That will continue.

Then there’s Take 18, a group which meets every month at my dining room table. We’ve been doing this since before John Hall was elected [to the U.S. House of Representatives in 2006]. Sean Patrick Maloney [who represents the district now] has been here.

How did you wind up living in the Highlands?I was active in Clearwater and Art and I became good friends with Pete and Toshi Seeger. We decided we must live by the river. I told Toshi we’d be looking in Dutchess and she said: “Oh, it’s the boonies, you’re too active.” I told her, “Well, your husband does pretty well!” Not long after, Toshi called and said there was a sign outside a house that was designed with all natural stones and built by a good friend of Pete, and in fact Pete helped him build it.

We called [Cold Spring real-estate agent] Bob McCaffrey and told him we wanted it. Someone else had a contract on it but tried to get it for less than agreed, and so Bob said: “The house is yours.” That was 21 years ago. Bob appeared with two couches as a gift, and there they are — we still use them.” 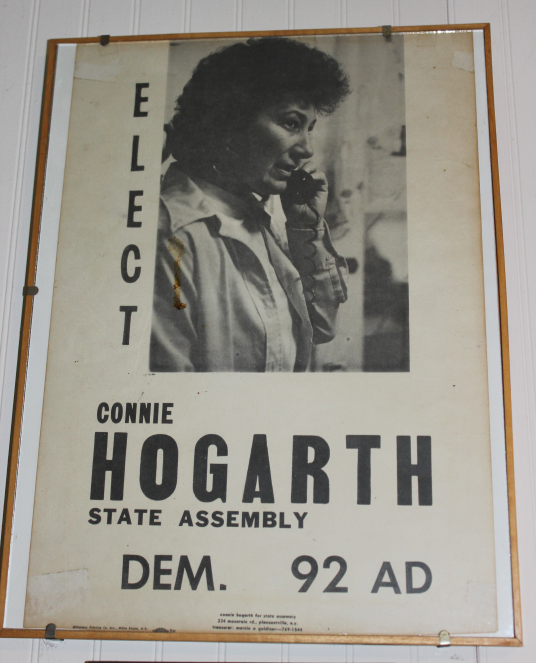 A poster from Hogarth’s campaign for State Assembly.

What might surprise people about you?How important music has been in my life. As well as being a projectionist, my father was an organist/pianist for the silents [films], so I was exposed early. I listened to classical, then folk, in my teens. The power of song, as Pete called it, is huge and was part of my diaspora. Pete would come to my house every few weeks and play. I have a drum collection. My personal great pleasure is chamber music — that’s my core, my love.

Being close to the Seegers — both of them — being best friends with them, we shared every holiday, every birthday; they are an essential part of our spiritual lives. I’ve been reading a book, Pete Seeger: In His Own Words. It’s snippets, not in sequential order. It’s my bedtime story every night; I read 20 minutes or so — it’s my conversations with Pete.

What still frustrates you the most?Racism. For all we’ve accomplished, this country was built on the backs of Native Americans and African-Americans. We have not gotten past it as much as one would have hoped. Knowing the current president can get away with all kinds of racism is disappointing. It’s a struggle that is absolutely pivotal to any progress in this country. The Rainbow Coalition [with Jesse Jackson] was probably the most important piece of my activist life. I hope major change will happen because of labor and people of color. I see those two concerns as paramount to making the changes I believe in. But all the activities I was involved in are spokes of the same wheel.

What if the struggle seems too overwhelming?Remember: The end point is not grim, it’s joy. [Radical activist] Emma Goldman said, “If I can’t dance, I don’t want to be in your revolution.” It encompasses the struggle for a happier, better life. If it’s grim, what the heck? There’s too much that’s good. When I think of my heroes — Mandela, Chavez, Gandhi — each one of them typifies a life of hope and of great struggle.