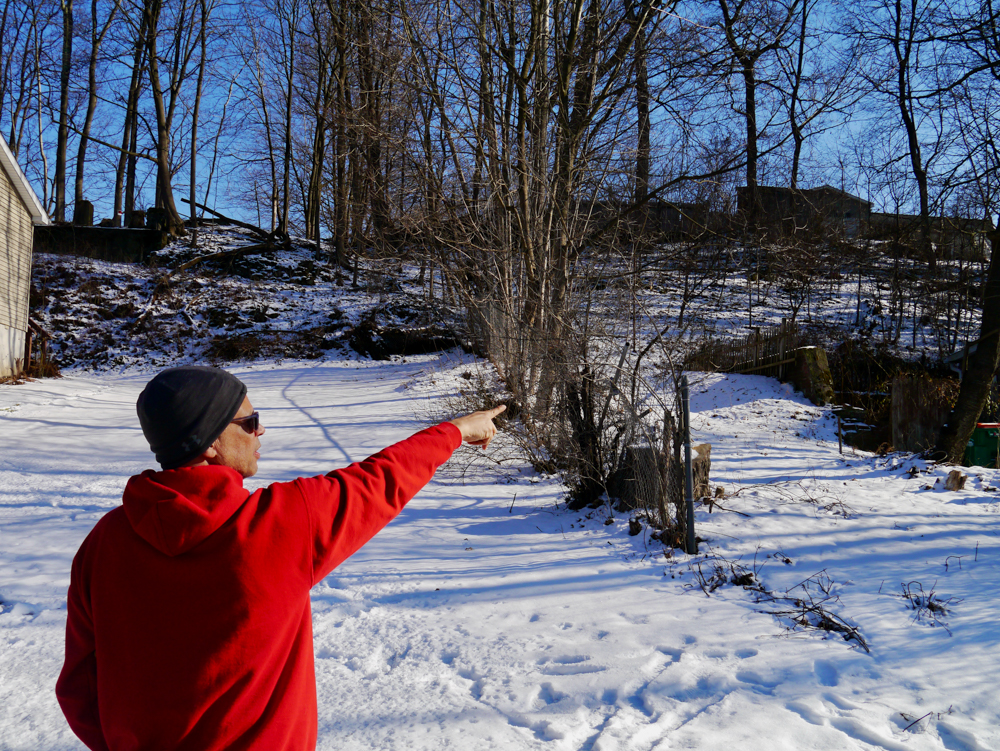 Paul Montalvo points out the boundaries of the "paper street" adjoining his property. The parcel extends about 10 feet on either side of the small tree line and continues up the hill. (Photo by J. Simms)

Roads in name only irk some landowners, benefit others

Paul Montalvo has a street running through his property. It’s been that way since he purchased the land and built his Beacon home in 1999.

Now the street belongs to him — or at least half of it does — although he isn’t sure he wants it.

Montalvo is one of a handful of city residents who gained ground — a few feet here, an extended boundary there — when Beacon officials last year abandoned several undeveloped “paper” streets that only appeared on maps.

The situation isn’t unique to Beacon. Typically, a developer or landowner will register the intent to dedicate land to the public for use as a roadway as part of a building or subdivision plan. In Beacon, some of these maps date to the early 20th century. But if a municipality never formally accepts the land, and the road is never built, a “paper street” is created. The street appears with its name on official maps but doesn’t actually exist. As decades pass, it’s easy to imagine budgeting, maintenance and liability issues arising.

Paper streets could also lead to lot-line complications if a property owner wants to sell or build something, such as a shed or an accessory apartment.

Beacon’s paper streets have no easements or utilities, and they don’t provide the sole means of access to any abutting parcel, City Administrator Chris White told the City Council last year after conducting a survey. Beacon determined it had no need for the land and would make no claim. Instead, the property would be given to the landowners, or split between neighbors, as necessary.

At Montalvo’s Wilson Street residence, the invisible road borders both his property and a neighbor’s. Long overgrown with trees, the land contains a gnarled chain-link fence installed years ago by the city. The boundaries of the paper street, which continues up a hill, are located about 10 feet on either side of the fence. Deer, possums and other critters are the only ones that use it now.

The trees were what prompted Montalvo to speak up in a public hearing last fall, before the city’s abandonment. One tree on the paper street, he said, had fallen on his son-in-law’s car. Another, rotted and leaning, seemed poised to topple over. Who was responsible for cutting it down?

“I’ve been hauling [dead] tree limbs away every year for probably the last 10 years,” Montalvo said this week. The city eventually agreed to cut down the dangerous tree.

Of his paper street, Montalvo said: “I don’t want anything to do with it. I know it will involve having to get a new survey if I ever sell my home. There’s two grand right there.” 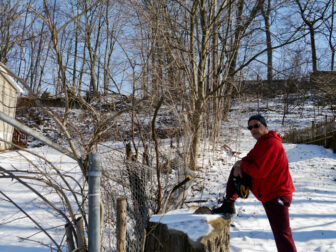 Montalvo rests his foot on the stump of a tree Beacon agreed to cut down on the paper street adjoining his property. (Photo by J. Simms)

Some of the paper streets in the area, on Beacon’s east side, were once part of a 19th-century community that grew up around the employees of the Groveville Carpet Mill, now the Lofts at Beacon apartment complex. Some, such as Aldridge Street, a paper street that runs behind Montalvo’s property, served a former cottage neighborhood that may have been part of a Jewish settlement camp.

City Attorney Drew Gamils said that Beacon began investigating its paper streets after receiving requests to abandon portions of a non-existent road called Ryans Avenue. Attorneys wondered “if there are other paper streets we should deal with all at once and, indeed, there were,” she told the City Council.

She said property owners who received land from the abandonments would not see hikes in their property taxes.

“I find that hard to believe,” Montalvo said this week. “If you have more square footage, how can your taxes not go up?” And, he asked, how can the city give it away if it’s not clear who owns the property?

Wesley Avenue resident Stephen Richards said during the city’s hearing that his family would happily accept the additional 450 square feet it stood to gain. “We welcome that extra footage, not necessarily that we’ll do anything on it, but it may allow us to do more with what we already have,” he said.

Richards said the space could allow him to install a paved driveway or finish other projects he’d given up on because of tight confines. “Anything we do, I want to make sure it’s done legally,” he said.

On Tuesday (Feb. 15), Montalvo said he worries about what will happen when the trees surrounding the dilapidated fence start falling on his neighbor’s property.

“He’s got a bunch of trees now, and if they fall, who’s going to be liable?” he asked. The land gained after the city’s abandonment “is a gift to some and it’s a pain to others. But they did what I asked [by cutting down the most foreboding tree], so I can’t really complain.”