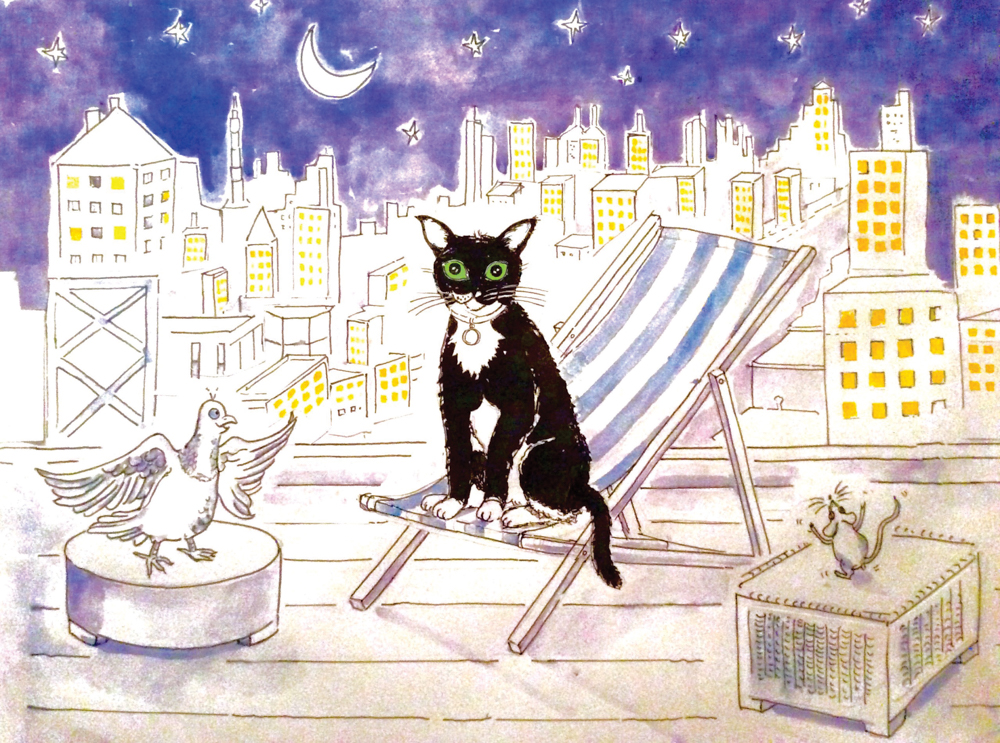 An illustration by Pippa Mayell from "Hello, My Name is Bunny!"

Bunny, the star of a series of children’s books, doesn’t hop.

Don’t feel too bad for her, though. Among other skills, she can fly. 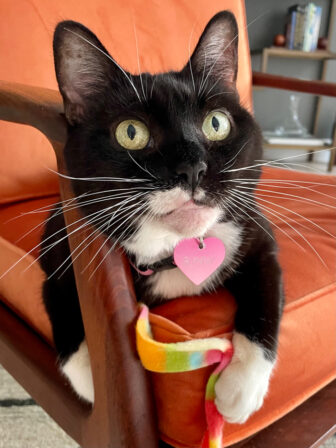 Bunny was the inspiration for the series. (Photo provided)

Bunny is a creation of Matt Bloom, who writes books about her, and Shelley Simmons-Bloom, who shapes the stories and edits and markets them, including on Instagram, where Bunny has 15,000 followers. The couple are recent transplants to Beacon, which will be the setting for a forthcoming Bunny book.

And, oh, nearly forgot, Bunny is no bunny — she’s a cat inspired by a real cat of the same name who also recently moved to Beacon.

Bunny, a small, green-eyed tuxedo charmer with beguiling whiskers, was adopted by the couple from a Petco store in Union Square in 2014, when they were living in Brooklyn. “We’d had various pets, but never a cat or dog,” Bloom says. “Shelley really put the pressure on.” They had chosen the name Bunny even before the adoption.

The couple envisioned Bunny as the center of a series of vignettes designed to appeal to children ages 6 to 10, whom they saw as “underserved, being between picture books and Harry Potter.” Indeed, the books have “found a sweet spot in kids around 8, 9, 10 years old — plus adults love them,” Bloom says. “My job as a writer is to channel Bunny’s personality.” 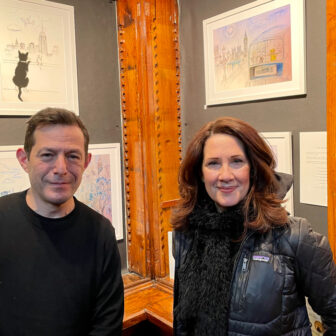 Matt Bloom and Shelley-Simmons Bloom are shown with prints from My Name is Bunny! on display at the Howland Cultural Center.

Bloom’s other books are novels such Salt of the Nation (“A working class guy punches out a politician and it goes viral,” he explains), so Bunny is a different kind of protagonist.

Not that there isn’t action in Hello, My Name is Bunny! After Bunny escapes from the clutches of a mean janitor, she and her pals (a mouse and a pigeon) in New York City grapple with other fearsome challenges. In the end, Bunny comes to the aid of an exploited carriage horse, saving him from the hardships he was enduring.

The second book moves the setting to London and is more sedate, introducing a young girl who accompanies Bunny as they work to eliminate fox-culling. 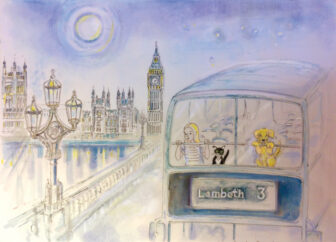 An illustration by Pippa Mayell from Hello, My Name is Bunny! London

The couple recruited a family member — his nephew’s wife, Pippa Mayell, who is based in London — to illustrate the books. The next titles in the series will be set in Paris and Tokyo, and Beacon is also on the list. 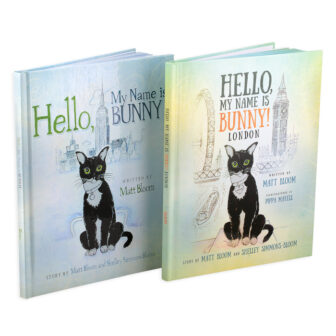 There are two books in the Bunny series, with more to come.

The two volumes were self-published, but Adelaide Books, Bloom’s adult fiction publisher, has picked up the series and plans to re-release them. They have won several awards, including Best Early Chapter Book in the Moonbeam Children’s Book Awards.

The stories include lessons on kindness, empathy and teamwork. “We try to impart the message without being too heavy-handed,” Bloom says. “But we’re always working toward this common goal.” With each book sold, he and his wife donate $5 to an animal shelter.

The couple moved to Beacon in March 2021; Bloom lived in Cold Spring in the early 1990s. “After years in New York City, it was time for a change,” he says. “Bunny loves it. She looks out the window at birds, deer and groundhogs and is over the moon.”

Five prints of Pippa Mayell’s drawings of Bunny are on display at the Howland Cultural Center, 477 Main St. in Beacon, as part of its Celebrating Animals exhibit that is open from 1 to 5 p.m. on Saturday (Feb. 19), Sunday (Feb. 20) and Saturday (Feb. 26). Proceeds from the sale of the prints will benefit Mid Hudson Animal Aid.