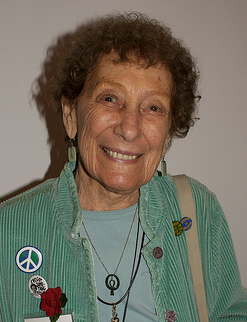 She was born in Brooklyn in 1926, the daughter of Stanley Holubar and Rose Mandel. Her life as an activist started early.

“My uncle and my father got jobs as projectionists, and they had a strong union,” she once recalled. “I used to walk the picket line with my father when I was 7 or 8 years old. We won most of the labor struggles and I say that it’s possible: It is possible to be a community of workers, to resist and to win.”

Connie attended the University of Chicago on scholarship, where she studied pre-med and dance. She worked under Jacob Auslander, who was a member of the McCarthy-era Joint Anti-Fascist Refugee Committee. When Julius and Ethel Rosenberg went on trial for espionage, Connie traveled to Washington, D.C., for her first Capitol protest and became immersed in the political life of the times. She called it a revelatory and rich experience.

In 1953 she married artist Burne Hogarth, who drew the Tarzan comic strip from 1937 to 1950 and co-founded the art school that became New York’s School of Visual Arts. They raised their two sons, Richard and Ross, in Westchester County. Connie and Burne divorced in 1981, and nine years later she married Art Kamell, a longtime activist and former labor lawyer, who died in 2010.

Connie deepened her activism as the U.S. escalated its war against Vietnam and the antiwar movement grew stronger. She was active on local and national levels with a range of organizations, including the Women’s International League for Peace and Freedom, Women’s Strike for Peace, the ACLU and the NAACP.

In the early 1970s, as U.S. troops began to leave Vietnam, Connie united diverse activists and groups working for peace and economic justice to form WESPAC (the Westchester People’s Action Coalition) in White Plains, which she led for 23 years. In addition to her tireless work with WESPAC for progressive social change, Connie ran for the state Assembly in the early ’70s and was a local leader in the Senate campaign of Ramsey Clark and the presidential campaigns of the Rev. Jesse Jackson, including the ongoing Rainbow Coalition.

Founded during Nixon’s presidency, WESPAC described itself as “an alternative to despair.” It was in the vanguard of struggles against U.S. intervention and for democracy in Vietnam, Central America, South Africa and Palestine. Under Connie’s leadership, WESPAC campaigned locally and globally against nuclear power and nuclear weapons, and for racial, gender and economic justice, and against the death penalty and domestic repression. Connie continued to work on these issues for the next half-century — long enough to see the Indian Point nuclear plant close. She recognized the dangers of climate change earlier than most, including it in WESPAC’s work since the 1990s.

The national peace movement recognized Connie’s leadership, and she co-chaired National Mobilizations for Peace, Jobs and Justice in 1978 and 1982. Connie often put her body on the line, and was arrested 20 times for nonviolent civil disobedience. Many of the young people who worked with her absorbed her commitment to social justice, becoming lifelong activists.

Connie “retired” from WESPAC in 1996, but continued to “think globally and act locally,” establishing the Connie Hogarth Center for Social Action at Manhattanville College. She mentored activists who continue her work for peace and justice, against climate change and to advance human rights around the globe.

Her friendship with Toshi and Pete Seeger brought Art and Connie to the mid-Hudson Valley in the mid-1990s. She and Art settled into a home outside Beacon. Connie was active in Clearwater, the ACLU and Democratic politics. She hosted many Sunday meetings to get the vote out, create letter writing campaigns or raise money and awareness for candidates. In 2009, she was awarded the Ossie Davis Human Rights Lifetime Achievement Award and in 2017 she received an honorary doctorate from Manhattanville College.

In Connie’s own words: “Remember: The end point is not grim, it’s joy. Emma Goldman said, ‘If I can’t dance, I don’t want to be in your revolution.’ It encompasses the struggle for a happier, better life. If it’s grim, what the heck? There’s too much that’s good. When I think of my heroes — Mandela, Chavez, Gandhi — each one of them typifies a life of hope and of great struggle.”

Along with her sons, she is survived by her daughter-in-law, Kris, and her grandson, Brady. Memorial donations may be made to the WESPAC Foundation (wespac.org) and/or the Indian Point Safe Energy Coalition (ipsecinfo.org).