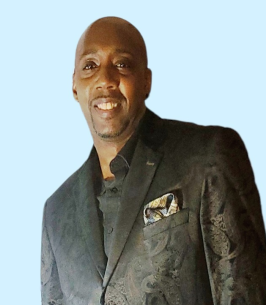 He was born in New York City on March 18, 1972, the son of Yvette Albritton and Edward Holmes. He was a bright and energetic child who received an excellent education in the Catholic school system, his family said, graduating from All Hallows Catholic High School in 1990 and attending Baruch College to study business and accounting.

Throughout his schooling, Der-Ron was a student-athlete who excelled in math and dominated on the basketball court. He had numerous sports-related nicknames, such as “Quick” and “Quiet Storm”. “Slinky” was a childhood nickname, as well. He was also praised for having a smooth left-handed jumper. His love of sports extended into adulthood. He bonded with co-workers on various softball and basketball teams.

When he was in junior high school, Der-Ron’s mother got him involved with the Mission Cadet Corps to keep him off the streets. He was a camper, then a counselor and played on the CMCC basketball team in the Billy Clark League. Der-Ron spoke fondly of his cadet mentors and the lifelong friendships that he gained. He credited the cadets as being instrumental in his development as a man and person.

His joy of driving manifested into a career with the MTA as a bus operator in 2008. He started working at the Kingsbridge Depot in the Bronx. At the time of his passing, he was working at the Tuskegee Airmen Depot.

Der-Ron always brightened the atmosphere with his gregarious personality and sense of humor, his family said. He loved to dance and brought life and light to every gathering. He joked with his wife that when he got to heaven, he would tell David to speed up the harps and teach him some dance moves.

Der-Ron had a huge heart. He cared for people, showed mercy to those with fault and was always ready to lend a helping hand, his family said. He volunteered for food pantries and served the community hot breakfast meals. He was a supportive husband and the biggest cheerleader, who aided his wife’s Santa workshops, business endeavors and Purpose Purse ministry.

Der-Ron dedicated his life to Jesus Christ on Feb. 7, 2016, and was baptized in the Delaware River at Eddy Farms on July 30, 2016. He was a faithful member of Open Arms Christian Ministries, where he served as director of the Audiovisual Ministry and member of the Praise and Worship Team. He was in prayer, study or worship service five days a week.

Der-Ron is survived by his wife, Tsahi Alexander-Holmes; his daughter, Chyanne Yvette Holmes; his step-up children, Ashanti Harris and Kamaal Alexander; a brother, Edward Holmes; and a cousin, James Skinner.

Family and friends will gather on Saturday (Feb. 19) at 9 a.m. at One Accord Christian Church, 88 Lake St., in Newburgh. A funeral service will be held at 10 a.m. at the church.