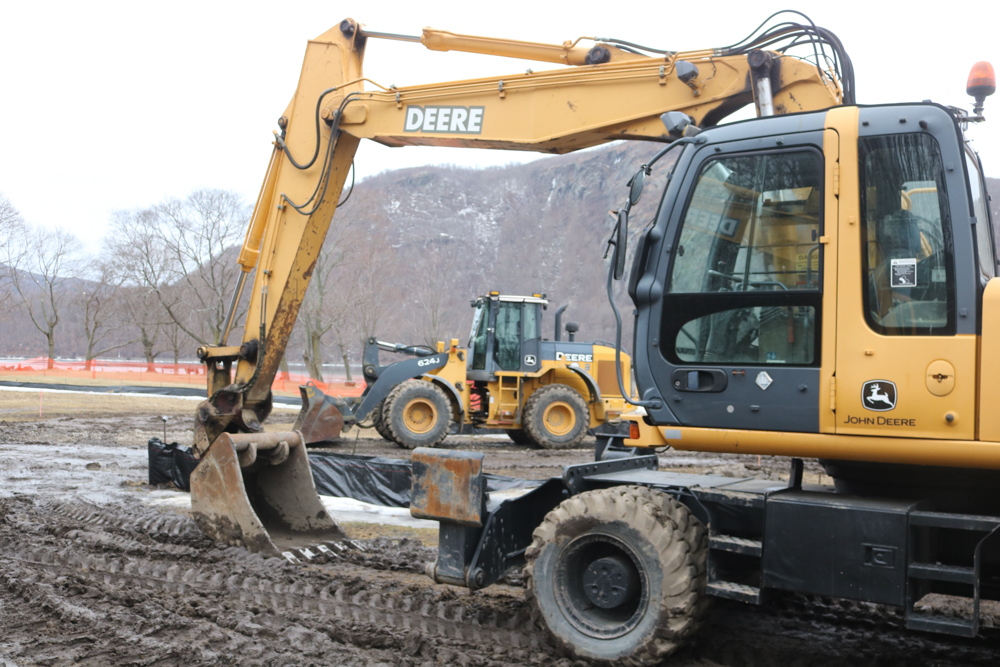 Work has begun on restoring the shoreline at Dockside Park. (Photo by M. Turton)

Representatives from the parks and environmental conservation departments updated the Cold Spring Village Board on Wednesday (Feb. 16) on the shoreline protection project underway at Dockside Park. More than 40 residents also attended the meeting, which was held via Zoom.

Dockside Park is owned by the state parks system but has been managed by the village since 2018.

While no one questioned the need to combat shoreline erosion in the 26-acre park, some residents expressed concern about the project’s potential impact on the village, which continues to struggle with a shortage of parking and, at times, overcrowding.

Coyle Industries, based in Hopewell Junction, began work on the $1.86 million project late last year. It is being funded entirely by the state.

Initial work has included removal of riprap, slabs of concrete and other debris. When complete, the rehabilitated shoreline will be regraded into terraces protected by boulders and planted with native vegetation to help reduce erosion and provide wildlife habitat.

The project will also include restoration of the badly decayed boat ramp and creation of a walking path that complies with the Americans with Disabilities Act.

Dan Miller, the project manager at the state Department of Environmental Conservation, has worked along the Hudson River since 1990. He described Dockside as “an absolute jewel … one of the most amazing, beautiful spots on the river.” But, he added, “it is actively eroding; the property is mostly fill. The river is continuously trying to take that land.”

Miller said that in the early 2000s, the DEC started to consider how climate change will affect the river.

“We wanted ways to build in resilience to large storms and rising sea levels that not only take into account the river’s ecology and health, but also how people use it,” he said.

John Blair, an engineer with the state Office of Parks, Recreation and Historic Preservation, said even though Coyle’s work on the shore must be done during low tide, the contractor’s schedule is aggressive.

The intent, he said, is to add vegetation during the spring planting season. If construction is not far enough along, planting would have to wait until fall.

Blair said residents can continue to use parts of the park during construction but that some areas will be restricted for safety reasons. There also may be times when the park is closed.

Village Trustee Joe Curto asked about Cold Spring’s role in maintaining the shoreline protection once the project is complete.

Linda Cooper, regional state parks director, said there may be a need to recruit local volunteers to help with tasks such as removal of invasive species. The village, she said, will continue basic maintenance such as mowing.

Miller added that because Dockside is a demonstration project, state agencies will carefully monitor the shoreline seasonally and after major storms

Even though it includes no major improvements to the park, “it’s a big project from a planning perspective,” said Jack Goldstein, chair of the Planning Board, because of its effect on parking and tourism.

Cars are not permitted in Dockside Park nor is there a plan to add parking. The restored boat ramp will be for carry-in vessels only, such as kayaks or paddle boards.

But Goldstein described the area near the park entrance and the corner of Northern Avenue and West Street as already crowded at times and “restrictive for off-loading boats.”

He also said Cold Spring “has changed significantly” since 2013, when residents expressed support at public meetings to restore the boat ramp.

“We don’t want to lose what is becoming a scarce living environment: A village with people who work here, whose kids go to school here, but still has the capacity to share it with others,” he said. “It’s not an easy formula.”

Goldstein called for greater collaboration between the state parks department and the village, especially in light of the proposed Fjord Trail.

Cooper said that she wasn’t convinced that rehabilitating the shoreline or upgrading an existing boat ramp would bring more visitors to Cold Spring. But she agreed with the need for collaboration, noting that “there is plenty of time” because construction on the Fjord Trail is not expected to begin before 2027. She noted that the path proposed for Dockside was realigned to better link with the trail.

MJ Martin, director of development and community engagement for the Hudson Highlands Fjord Trail, said on Thursday (Feb. 17) that its plans call for Dockside Park and Long Dock Park in Beacon to be the southern and northern gateways for the trail, with four other access points along the route.

Martin said a public meeting on plans for the Fjord Trail will likely be held in March.

Cooper said a parking study is also expected in the months ahead, adding: “I want to remind people the reason the project is there is because without it, Dockside Park might not exist. Sea-level rise is coming; this project will hopefully allow Dockside to be a park for many years.”