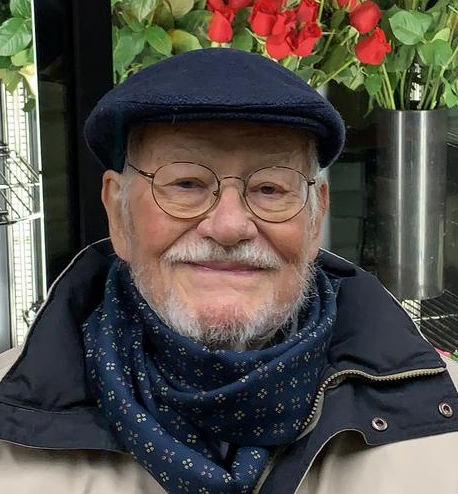 Ben was born on May 5, 1929, in Holden, Massachusetts, and grew up in Sterling, Massachusetts; Canon, Georgia; and the Bronx. This included a stint at the Leake & Watts children’s home (now Rising Ground), where he and his brother Fred lived in the orphanage’s dormitory while their mother worked as its dietician. (They visited her on Sundays.)

Ben attended the Bronx High School of Science and the University of Iowa, where, after one semester, he enlisted in the U.S. Army in September 1946 at age 17. When his service as a radio announcer in Livorno, Italy, ended, Ben returned to Iowa and graduated Phi Beta Kappa in 1951.

Ben was a lawyer with Cravath, Swaine & Moore for 40 years, from 1954 to 1994, working on corporate financing transactions and mergers and acquisitions for global corporations. He was in charge of the firm’s Paris office in 1965 and 1966. Ben genuinely enjoyed his career, his colleagues and his clients at Cravath, his family said.

Ben also lived in Brooklyn and Santa Fe, New Mexico. One of his favorite charitable activities was sending children’s books to a library founded by his sister-in-law, Catherine, in Kumbo, Cameroon. He also helped many relatives with their education.

Ben was an early proponent of and leader in establishing the Brooklyn Bridge Park on old piers along the Brooklyn waterfront. He and his late wife, the former Sally Molloy, had wonderful friends in each of the places they lived and had an incredibly busy social life. (He said he had been an introvert, but Sally changed all of that, his family said.)

Ben collected Native American pottery, textiles and prints; Japanese prints and art from the Pacific Northwest; Hudson River School paintings; and books and antiques. He had a fabulous sense of humor, a sharp mind and deep empathy for others, his family said. He and his family traveled all over the world — he didn’t want to take vacations anywhere close to NYC and risk being called into the office — and he reveled in learning about other cultures. Inspired by Sally’s example, Ben wrote a memoir several years ago.

He is survived by his children, Michael (Kate), Betsy and Susan (Karen); his grandchildren Cameron, Benjamin and Harrison Crane, Noah, Alexander and Elsa Mushkin, and Lily Crane-Newman; his sister-in-law, Catherine Molloy; and his close friends Peter Leavy, Marcia McHam and Melissa McHam.

A celebration of life is planned for the spring. Memorial donations may be made to the Brooklyn Bridge Park Conservancy (brooklynbridgepark.org), Planned Parenthood of Greater New York (plannedparenthood.org) or the Santa Fe Opera (santafeopera.org).