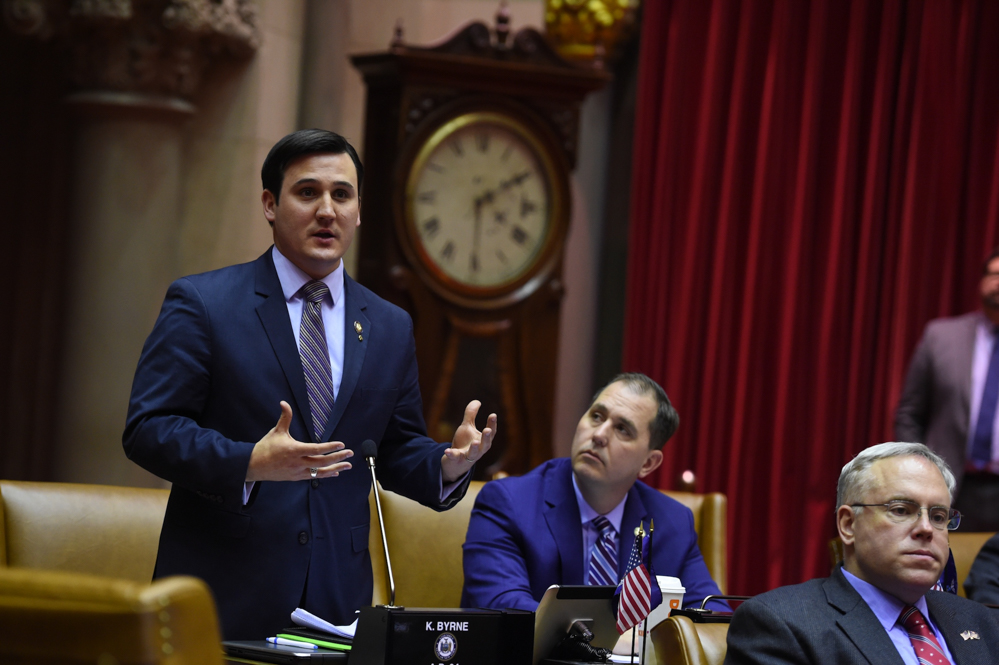 Republican chair objects, accusing him of ‘dishonor and disloyalty’

Kevin Byrne last week won the Putnam County Republican Committee’s endorsement for county executive, following an extended war of words — though not with his opponent for the GOP line, Legislator Carl Albano.

Instead, Byrne, a state Assembly member whose district includes eastern Putnam, clashed with Anthony Scannapieco, the longtime head of the committee, who also works as one of two county Board of Election commissioners.

Despite Scannapieco’s misgivings about Byrne, which he expressed in correspondence to the party faithful, the state lawmaker won the endorsement, 148-76.

Albano has the backing of County Executive MaryEllen Odell, who cannot run because of term limits. If neither Byrne nor Albano drops out, they will compete in a June 28 primary. Party organizations must tell the state by Monday (Feb. 28) whether they need to hold primaries.

Campaigning as a candidate for “a new generation,” Byrne announced his plans in November to pursue the county job.

Albano, who cites his 45 years of local business experience and more than a decade on the county Legislature, declared his candidacy in December, saying he wants to continue the policies and practices of the Odell administration. His district includes Carmel and parts of Patterson and Lake Carmel.

Putnam hasn’t had rival Republican contenders for county executive since 2010, when Odell lost a primary to then state-Sen. Vincent Leibell, who won in the general election but never took office after being accused and subsequently convicted of violating federal anti-corruption laws. In 2011, Odell won a special election for the position and was elected to full terms in 2014 and 2018.

Whatever comity they then shared apparently no longer exists. Writing to Republican committee members on Feb. 4, Byrne complained that Scannapieco had been undermining his candidacy. “Running for county executive, apparently against the wishes of the man with whom I served as vice chairman, may seem a failure to ‘kiss the ring,’ ” he protested.

Nonetheless, he continued, “politicians and party chairs don’t get to anoint candidates. We can win the county executive election this November, but we won’t win if we don’t choose our best candidate through honest competition within a vibrant and active Republican Party.”

He said a poll his team conducted before he decided to run “put me 41 points ahead” of any other likely Republican hopeful and that he also “has demonstrated the crucial ability to raise funds” and keep Putnam under Republican control.

A day later, at a campaign event, Byrne blasted “an establishment that’s working against us.” He promised that “I will not be dissuaded by those in power or others who are creatures of the establishment. I took on the establishment in Albany and if I have to take it on in my own backyard, I’ll do that too.”

On Feb. 10, in a letter to Republicans, Scannapieco responded that Byrne has “brought the party to the brink of broken with this primary” and that “it is his dishonor and disloyalty that is the destructive force here.” Describing Byrne as “a career politician” who has “lived his adult life from photo op to photo op,” Scannapieco asserted that in three terms in the Assembly, Byrne has “offered no help in any way, shape or form to our local government.”

In a second letter the same day, Scannapieco disparaged Byrne’s poll, arguing that in 25,000 phone calls, the pollster reached 240 individuals and only 139 of them favored Byrne – “a meaningless result.” Scannapieco urged Republicans to “not be fooled by a snake-oil salesman of the ‘new generation’ of supposed leadership.”

Albano has tried to steer clear. “I just want to emphasize that letters from our Republican chair regarding the campaign are not from me,” he said in a message to committee members before the vote.

Along with the Republican endorsement, Byrne has obtained the backing of the Putnam Conservative Party; former U.S. Rep. Nan Hayworth, for whom he worked as an aide; former County Clerk Dennis Sant; and former county Legislator Roger Gross.

Disclosures filed with the state Board of Elections show that as of Jan. 17 Byrne had collected $122,672 in contributions and other receipts and spent $4,108. Contributions included $1,000 from the Molinaro for Dutchess campaign; $1,000 from Hayworth; and $500 from Tern Construction, operated by Ken Kearney, who built the affordable-housing West End Lofts in Beacon and owns the vacant former Marathon property in Cold Spring.

The Putnam County Democratic Committee has not yet endorsed a candidate.