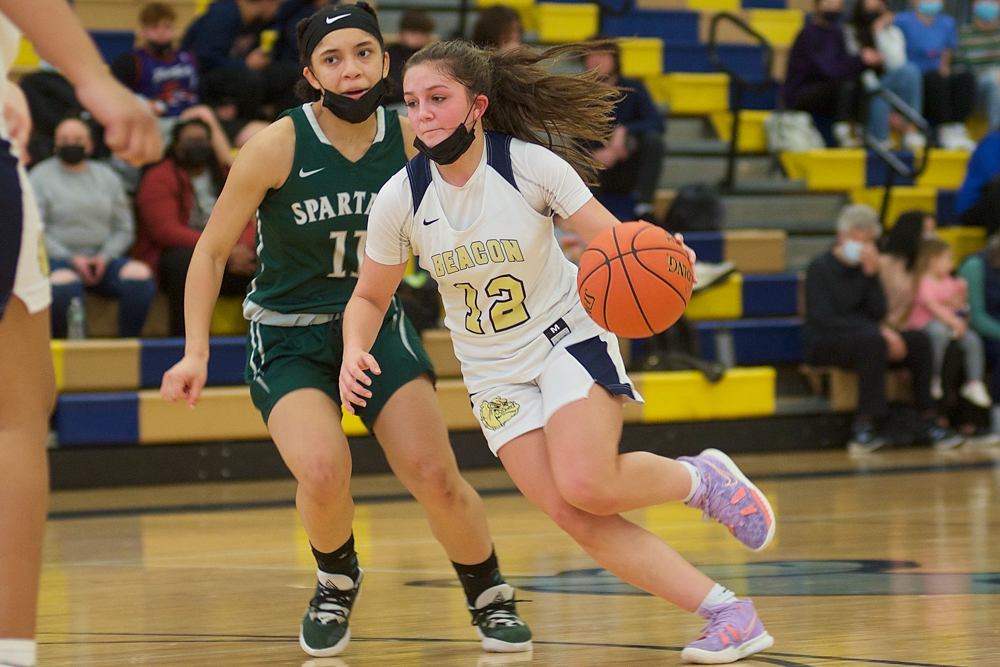 Reilly Landisi drives around a Spackenkill defender on Wednesday (Feb. 23) in Beacon’s regular-season finale. The Bulldogs open the playoffs on Saturday. (Photo by S. Pearlman)

Beacon wanted to end its regular season on a positive note and did just that on Feb. 17, scratching out a 59-58 win over host O’Neill High School of Highlands Falls on a free throw by Chase Green with two seconds remaining.

In a game that the Bulldogs led most of the way, O’Neill chipped away and tied it, 58-58, with 30 seconds left.

After a Beacon miss, Green forced a turnover, with the ball going to teammate Joe Battle. Moments later, Battle passed the ball back to Green, who missed a shot but was fouled. He hit one of two free-throws. O’Neill got off a potential game-winner from midcourt but it didn’t drop.

“Chase had an absolutely tremendous game,” said Coach Scott Timpano. “He gives us endless hustle. And Joe had a lot of big rebounds and did a lot under the basket. Jason Komisar was also phenomenal again; he had a big dunk early that energized us.”

Darien Gillins and Green each finished with 14 points, Komisar had 13 points and seven rebounds, and Battle pulled down nine rebounds to go with two points.

“That was a great win for our guys,” Timpano said. “We were coming off two losses to Goshen, which will probably be the top seed, so we wanted to go into the playoffs with some momentum.”

The Section IX, Class A tournament begins Saturday (Feb. 26); the Bulldogs (12-8) are expecting the No. 3 seed and a home game against Washingtonville (10-10). Saturday’s winner advances to the semifinals on Tuesday. First-round matchups are expected to be announced today (Feb. 25).

After finishing 1-11 last year as a member of Section I, Timpano said the Bulldogs’ work ethic hasn’t changed, but they’re older and smarter and playing more equitable competition in Section IX.

Beacon put the wraps on an impressive regular season on Wednesday (Feb. 23) at home, getting strong play from its roster of freshmen and sophomores to defeat Spackenkill, 39-27. 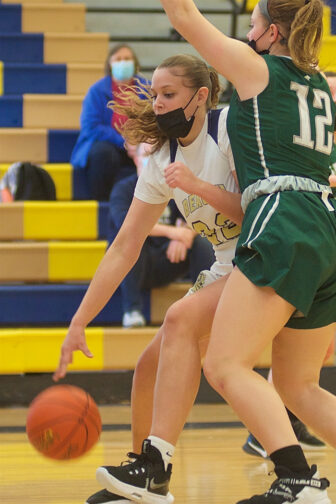 Rayana Taylor had 11 points for Beacon in a win last week over Minisink Valley. (Photo by S. Pearlman)

With the win, the Bulldogs finished the regular season at 12-8 and are hoping for a home game when the Section IX, Class A playoffs begin Saturday.

Coach Christina Dahl said she likes the way her young team has progressed in its first season playing in Section IX. “We’d love to make some noise in the postseason,” she said.

The victory over Spackenkill was the team’s fourth straight. Beacon got 10 points from Reilly Landisi, and Devyn Kelly and Shadaya Fryar each added eight. Lila Burke recorded six points and 11 rebounds and Daveya Rodriguez had five points.

“Lila’s energy and aggressiveness on the boards set the tone,” Dahl said. “Reilly did a good job attacking the hoop and we also had shooting contributions from Daveya and Devyn from the outside and solid post play from Lila and Shadaya.”

In a win at Minisink Valley on Feb. 16, Fryar scored 12, Rayanna Taylor had 11 and Kelly added six. “We lacked some intensity on offense, but our defense led us,” Dahl said. “Shadaya played great down low and Rayana hit some big shots in the fourth quarter to seal the win.”

Haldane (9-11), seeded No. 3 in the Section I, Class C tournament, is scheduled to play at No. 2 Yonkers Montessori Academy (12-8) on Tuesday (March 1). The Blue Devils defeated YMA by seven points early in the season. The winner will advance to the title game on March 5.

Dan Gilleo had a record-breaking season: He broke the Beacon High School record with a 760 series, tied the school record with a 289 game and finished with a 208 average and All-Section honors. He will bowl in the state tournament in Syracuse on March 12.