When Aaron Wolfe was gardening in his Cold Spring yard and kept finding trash, he took that as a signal to test the soil. He assumed the trash had been left by previous residents who also might have been burning garbage. The use of “burn barrels” releases so many pollutants that it has been banned in New York state.

Wolfe was concerned because he had planted fruit trees and had a vegetable garden. Soil contaminants from metals usually don’t show an immediate health impact but build up over time in the body without a person knowing it.

After Wolfe sent samples collected from five areas of his yard to a lab he found online, soil test results showed high levels of lead, above 400 ppm (parts per million by weight). Lead commonly occurs in soil at levels of 10 ppm to 50 ppm, which isn’t considered a risk. (See putnam.cce.cornell.edu for more information about how to get your soil tested.)

Lead can build up in soil from any number of sources and is usually found in higher concentrations in developed or urban areas. It was once used in products as diverse as paint and gasoline. Mining and smelting activities release concentrations of lead; so do discarded batteries, incinerator emissions and pesticides used on orchards and vineyards until the 1960s. 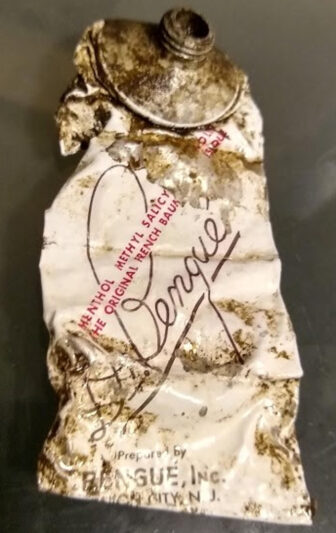 Aaron Wolfe found this Bengay tube from the 1930s buried in his Cold Spring yard while gardening, prompting him to have the soil tested for lead. (Photo provided)

Cold Spring’s industrial past, with the West Point Foundry and Marathon battery factory, make soil contamination more likely here. Areas where they operated became Superfund sites, the highest level of federally designated polluted areas. In addition to lead, the operations would have released metals that could be found in soil, including arsenic, cadmium, copper, mercury, nickel and zinc. Health impacts from these metals can include cancer and organ damage.

Once lead is in the soil, it doesn’t dissolve or go away. The highest concentrations are usually in the top 1 to 2 inches, the areas where we dig and plant and play and breathe dust stirred up by the wind.

Lead exposure is especially harmful for children and can cause permanent damage to the brain and nervous system, slowing growth and development. There isn’t a cure or a treatment. Once lead is in the body, it stays there forever. Toddlers can put dirt-covered hands in their mouths pretty fast before you can stop them. Pregnant women should always wear gloves when gardening because lead can affect a growing fetus.

Dismayed and wanting to verify his soil test results, Wolfe sent another sample collected from other locations in his yard, including his raised vegetable beds, this time to Cornell University. This test revealed even higher concentrations: 1,500 ppm to 1,600 ppm.

“It was very discouraging,” Wolfe said. “There isn’t any easy remediation. I wasn’t going to remove all the soil and fill it in again.”

While those lead levels are significant, it’s still possible to garden. The greatest hazards come from eating vegetables that haven’t been thoroughly washed and still have dirt on them. The same goes for working in the soil without gloves and wiping your mouth or nose so that soil is ingested or inhaled.

“You should elevate the vegetable beds at least 12 inches,” says Jennifer Lerner, its senior resource educator. “Line the bottom with landscape fabric and import soil. Pathways should be covered with thick layers of newspaper or cardboard with 3 to 4 inches of wood chips on top. You don’t want any bare soil that could be breathed in as dust.”

The safest vegetables to grow are those that bear produce above the soil, such as tomatoes, eggplant, squash, corn, peppers and cucumbers. Lerner also recommends covering the soil with mulch, such as straw. Squash and other vegetables with thick skins that grow above the soil are also lower-risk.

An earlier version of this column stated that the second lead tests on Wolfe's yard showed results of 500 ppm to 600 ppm. In fact, the results showed 1,500 ppm to 1,600 ppm of lead.