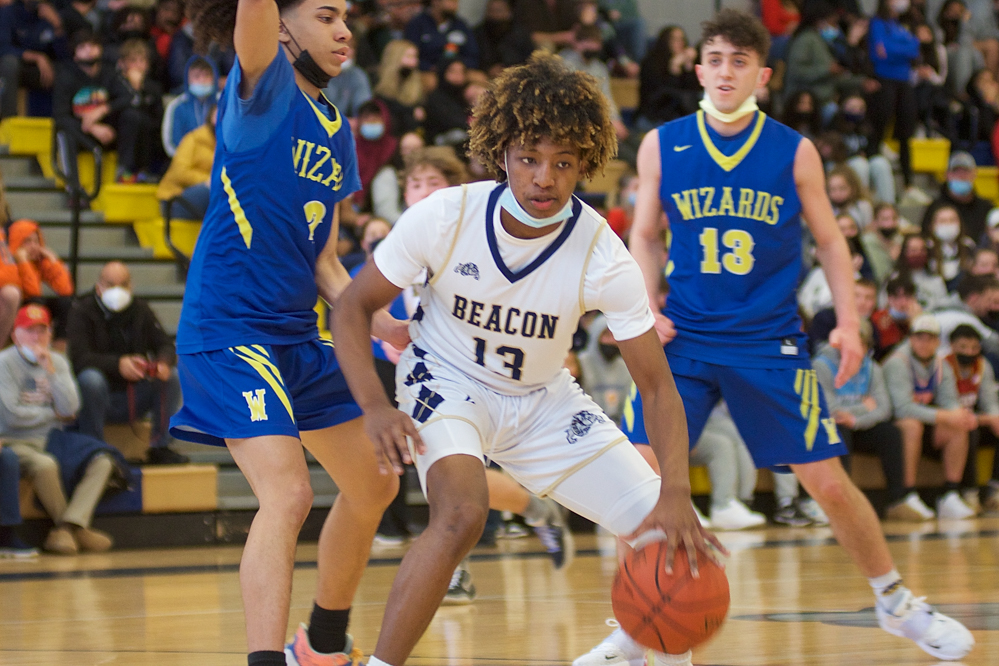 Everyone in the Haldane High School gym on Tuesday (March 1) expected the top-seeded Blue Devils (18-2) to run away from No. 4 Leffell (7-13) in the opening round of the Section I, Class C playoffs.

Everyone but the Lions, who had dreams of an upset dancing in their heads. 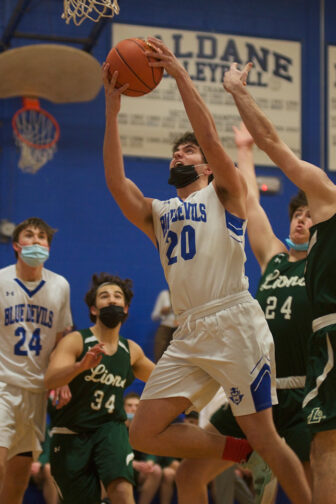 Down by nine points at halftime, Haldane overpowered the Lions in the second half and held off a late surge for a 67-59 victory and a ticket to the Saturday (March 5) title game against No. 2 seed Alexander Hamilton (16-5). The tipoff will be at 11 a.m. at Yorktown High School and the winner advances to the regionals.

Leffell played with poise and patience in the first half. Haldane led at the end of the first quarter, 17-16, but the Lions went on a 20-6 run in the second, fueled by three-pointers, and led by as many as 13 points.

The Blue Devils regained the lead (44-43) with 1:13 left in the third quarter and never trailed again as the long shots stopped falling for Leffell. The Lions managed to cut the deficit to four points twice, but Haldane had an answer each time.

For most of the evening, the answer was Matteo Cervone, who had his most dominant game yet. Working mostly inside, the junior forward powered and finessed his way to a varsity career-high 37 points. Ryan Irwin scored 11 points and had six assists and Matt Nachamkin recorded 10 points and nine rebounds.

“Matteo put us on his back,” said Coach Joe Virgadamo. “He was a beast and determined — he played as well as I’ve seen him play. He simplified his game and read the defense well. He also passed well. Nachamkin came up big — nothing phases him — and gave us balance, and Tristen Reid played great defense in the second half.” 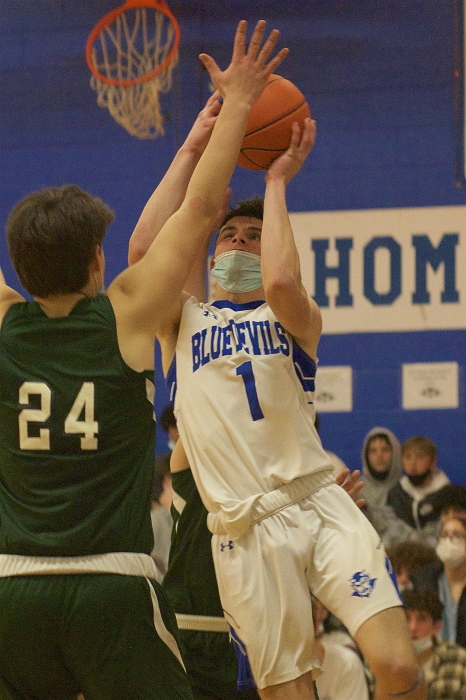 Saturday’s final should be a good one. Haldane defeated Hamilton, 67-64, in the first game of the season, and both teams had players record breakout games in the semifinals: In Hamilton’s rout of No. 3 Tuckahoe, sophomore Christian Davis scored a career-high 31 points, including five three-pointers.

Haldane has not won a Section I title since 2016. Virgadamo said Tuesday’s close win was a wake-up call for his players.

“The guys are poised and determined to bring home a title,” he said. “We know we’re the best team, and we haven’t put it all together yet. Hopefully we do that Saturday.”

Haldane played the semifinal without a starter, Soren Holmbo, who was out with an ankle sprain. He is expected to return on Saturday. Holmbo and Cervone were named this week to the All-Section and All-League teams, while Irwin and Reid were named All-Conference and All-League.

The Beacon boys, seeded No. 3 in the Section IX, Class A tournament, had beaten No. 6 Washingtonville twice during the regular season (by two and 11 points), so the Bulldogs were confident the third time would also be a charm, especially playing at home.

But this time the Warriors came out on top, hanging on for a 45-43 overtime victory that advanced them to the semifinals. 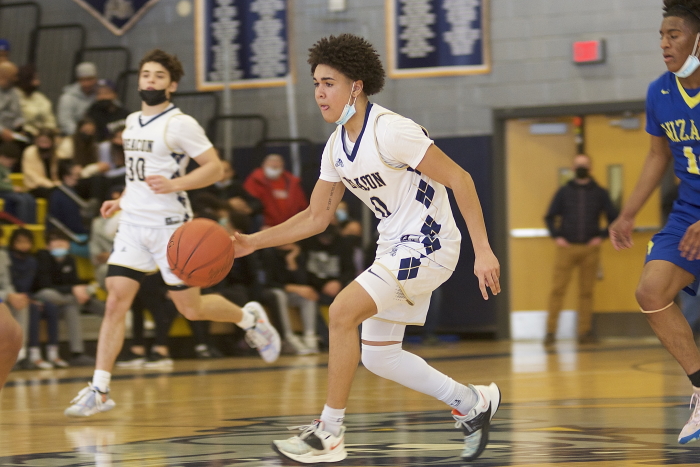 Beacon, playing its first season in Section IX after moving from Section I, finished with a 12-9 record.

“Playoff basketball is different, and a lot of our guys have not played in a playoff game,” said Coach Scott Timpano. “There’s something to be said for not having that experience. It took us a little while to match their intensity.” 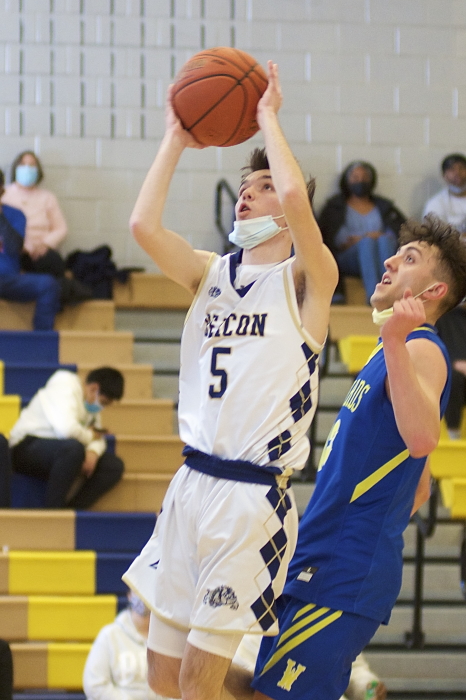 Beacon’s Jack Philipbar puts up a shot vs. Washingtonville. (Photo by S. Pearlman)

Beacon was up by three near the end of regulation when Washingtonville hit a three-pointer to tie it at 43-43 and send the game to overtime.

Neither team could find the basket in the extra period, with Washingtonville claiming the victory by scoring one bucket. Timpano said some defensive switches gave his team problems, but the Bulldogs had many chances to tie.

Timpano said his team should be proud of what it accomplished this season. “To go from one win [in 2020-21] to 12 is amazing,” he said. “And we did it with pretty much the same team. It shows all the work that they put in. We have a lot of guys returning next year and hope to get better.”

The Haldane girls, seeded No. 3 in the Section I, Class C tournament, traveled on Tuesday to face No. 2 Yonkers Montessori Academy, whom they had defeated early in the regular season by seven points. But the Blue Devils came up short, 48-36.

“We were maybe a little bit jittery, maybe too amped up,” said Coach Jessica Perrone. “Our passes weren’t crisp, and we made turnovers we wouldn’t normally make. We’ve had good rhythm the past few weeks, but we couldn’t find it. Maybe it was nerves, but there was a lot of disappointment after the game.”

Perrone said her team failed to take advantage of opportunities. “We had a lot of steals but weren’t able to cash in,” she said. “And we missed a lot of layups; it felt like there was a cap on the basket.”

Haldane ended its season at 9-12, but Perrone said the Blue Devils made a lot of progress. “I wish I had more time with this group,” she said. “They’ve worked so hard, and I hope they’re proud of the season they had. Our four seniors [Chiera, Siegel, Marisa Scanga and Jenna Irwin] will all really be missed.”

The Beacon girls, seeded No. 4, opened the Section IX, Class A playoffs on Saturday (Feb. 26) with a 41-33 home win over No. 5 Washingtonville but fell on Tuesday to top-seeded Cornwall Central, 30-28, which scored in the final 30 seconds to break a tie.

Beacon, which has only ninth graders and sophomores on the team, finished its season at 13-9. Reilly Landisi led the Bulldogs against Cornwall with 10 points and Shadaya Fryar added nine.

On Saturday, Beacon was trailing, 25-19, at the half but held Washingtonville from that point to only eight points. Landisi scored 14 points, Lila Burke had nine points and 11 rebounds and Devyn Kelly scored seven.

Against Cornwall, “we played with confidence and came out with energy and aggression,” said Coach Christina Dahl. “We executed our game plan, but fell short with missed offensive opportunities and foul shots.”

Still, she said, “for a team of freshmen and sophomores to make it this close to a sectional final is something to tip your hat to. The future is bright.”