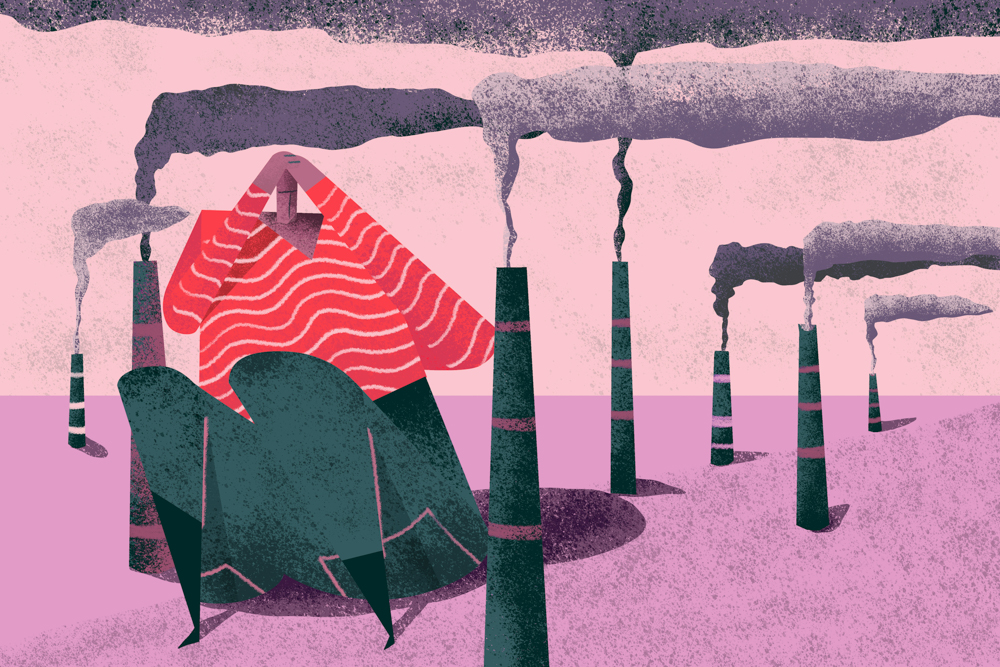 It happens when I see a red sun in the sky, knowing the cause is from wildfires burning 2,000 miles away; or when I read about ice sheets melting; or when I hear about pipelines being built: a tightening in my chest, my stomach feels queasy, my heart races, I feel tense and go from anger to despair to resignation in an endless loop, to the soundtrack of “It’s too late and I’m not doing enough and doesn’t anyone care?” It can be lonely.

As carbon emissions keep soaring, many people are struggling with emotions around climate. You don’t even need to experience climate-related disaster firsthand to experience “climate anxiety” — just reading about it can be triggering.

In a presentation at a Climate Town Hall hosted by Sandy Galef, who represents Philipstown in the state Assembly, clinical psychologist Eric Lewandowski of New York University defined climate anxiety as bouts of worry, grief, despair, panic, sadness, anger and/or hopelessness about the deteriorating environment or future.

“Climate change is a real threat,” he said. “It is rational to be worried. In this case, anxiety is an adaptive emotion signaling danger.”

During a conversation, Heather Zuckerman, a psychotherapist in private practice in Garrison, shared her own take with me. She noted, first, that “a lot of the younger generation are a little doom-and-gloom with the environment and the world.”

A survey published in the Journal of Lancet Planetary Health backs this up. More than 10,000 young people around the world between the ages of 16 and 25 were surveyed, and 59 percent said they were very or extremely worried about climate change, while 84 percent were at least moderately worried. In addition, 7 in 10 described the future as frightening.

Of course, young people aren’t the only ones with deep concerns. Zuckerman said she has noticed that among people of her generation — with older children who are leaving the house — there is anxiety about where to retire.

“I had friends who moved inland in Florida because of climate change,” she said. “They went from, ‘I can live anywhere,’ to ‘Oh my God, where am I going to live?’ ”

According to a landmark report by the American Psychological Association, the mental responses to climate change, such as “conflict avoidance, fatalism, fear, helplessness and resignation” are growing stronger and prevent us from addressing the causes and solutions or from achieving “psychological resiliency.”

While it may seem counterintuitive, maybe a little climate anxiety is a good thing. It can motivate people. But you don’t want so much that you feel paralyzed. It’s about finding a way to harness anxiety and stay productive.

There are strategies for dealing with climate anxiety. Here are my takeaways from Turn the Tide on Climate Anxiety, by Megan Kennedy-Woodard and Patrick Kennedy-Williams, the co-founders of a U.K. firm called Climate Psychologists: (1) Understand and accept the facts about climate change; (2) Immerse yourself in nature; (3) Practice self-care; (4) Take individual and collective action; and (5) Celebrate success.

For action items, Philipstown Fights Dirty (philipstownfightsdirty.org), a campaign I spearheaded with the Ecological Citizens’ Project, provides more than 80 pledges you can take, including many that are low-hanging fruit. Climate Smart Philipstown also will be hosting workshops starting Wednesday (March 16) on how to take climate action. And Earth Day is approaching on April 22 — a time to celebrate and refill your cup!

Climate change isn’t your problem alone to solve, but we all have a role to play. Take care of yourself, so you can help take care of this beautiful world we call home.