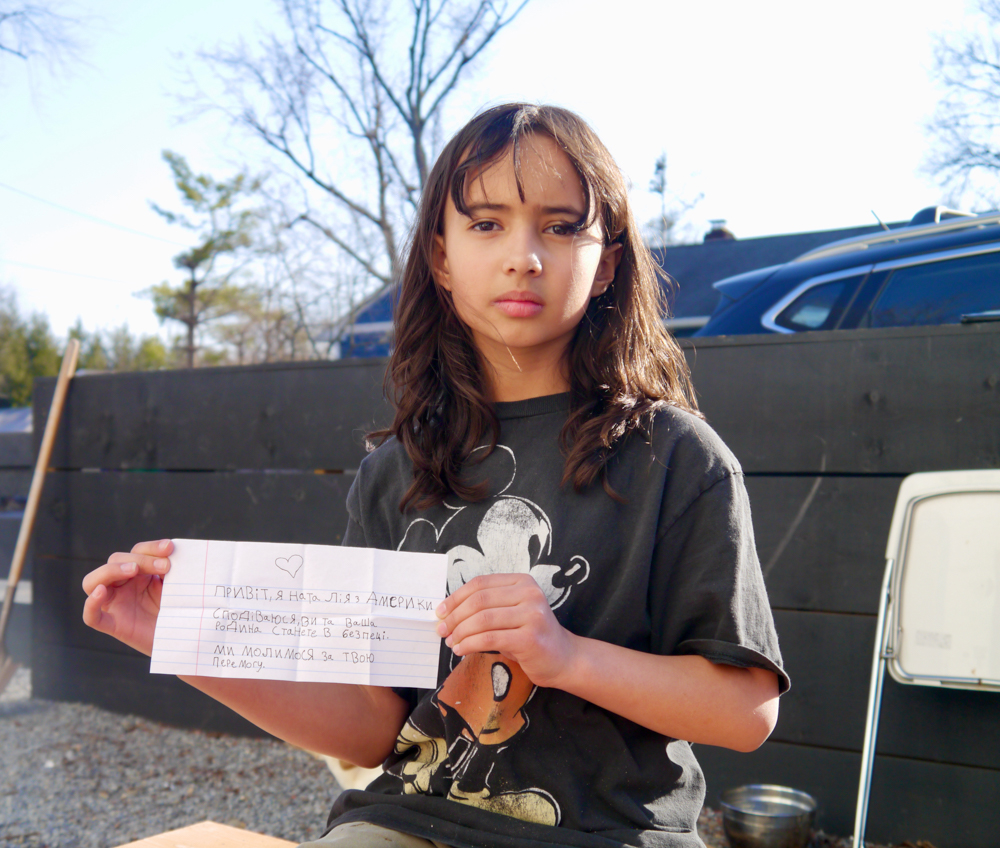 Natalia Garcia, 10, of Beacon, holds one of the messages she wrote in Ukrainian to be sent to refugees. (Photo by J. Simms)

While the mass destruction and mounting casualties caused by Russia’s invasion of Ukraine have dominated the news, a Beacon family is trying to spread hope through handwritten letters, from one child to another.

Their message to the more than 3 million people, half of them children, who have fled Ukraine? The same words they say they would want to hear if they were in danger.

After a dinnertime conversation with their parents about what their mom called “the horror of having to leave our home and not know where to go,” 10-year-old Natalia Garcia and her brother, Leo, 12, decided to write letters to Ukrainian children displaced from their homes. The idea, which the family is calling “Letters of Hope,” has grown exponentially from there, with friends from Beacon and surrounding communities, and the family’s former neighborhood and school in Brooklyn, joining the campaign.

During the second wave of the COVID-19 pandemic in 2020-21, Kelly and Dan Garcia home-schooled the children. “It was an opportunity to get connected with our kids,” Kelly said this week. She said both children developed an interest in history and geography, which led to “interesting conversations about life” around the dinner table, including, recently, about the war in Ukraine.

On the morning of Feb. 24, when Russian forces crossed the border into Ukraine, Leo asked his mother, “Oh my God, did they invade?”

“He could see it on my face,” she recalled.

Together, the siblings came up with the idea of writing letters, and Natalia suggested they would resonate more if written in Ukrainian.

“I thought about how they would feel knowing that people noticed them,” Natalia explained. “I hope they would feel happy and have hope realizing that we’re here for them.”

Natalia said she entered messages such as “We hope your family is safe,” “We’re praying for peace” and “Sending love from New York” into Google Translate (bit.ly/eng-to-ukr) and copied the Cyrillic letters by hand.

Kelly and Dan contacted Caritas, a Polish orphanage providing shelter to Ukrainians, and Kulturschoepfer e.V., a refugee organization in Berlin where volunteers teach children music, theater and dance “to bring some normalcy into their lives, to let them feel like children again,” Kelly said.

The two organizations, which are collecting supplies for refugees, agreed to distribute the letters. The family plans to send the first shipments on March 31.

In addition to letters, the Garcia family has turned its home into a hub for collecting flashlights, batteries, medical supplies and other provisions to be sent overseas.

To raise money, Dan Garcia, who plays classical guitar, is organizing a benefit concert with other Beacon musicians for late April or early May. The family is asking Main Street businesses to sponsor the event, which doesn’t have a venue yet, so that all proceeds can go directly to Ukraine. Anyone interested can contact Kelly at [email protected] or by calling 646-385-0337.

Dan says Leo and Natalia’s letter-writing project stems from the sense of awareness that he and his wife have tried to instill in their children.

“We teach the kids not to take anything for granted,” he said. “We have very privileged lives. It’s awareness, and then acting — not just sitting, not just watching the news.”

If the fighting in Ukraine persists, “we’ll continue to send letters and hopefully create a movement around it,” Kelly said. “These people are going to be displaced for a while.”

Messages in Ukrainian for refugees can be dropped by March 30 at the circulation desk at the Howland Public Library, 313 Main St., in Beacon or in the mail slot at The Current’s  office at 142 Main St. in Cold Spring.