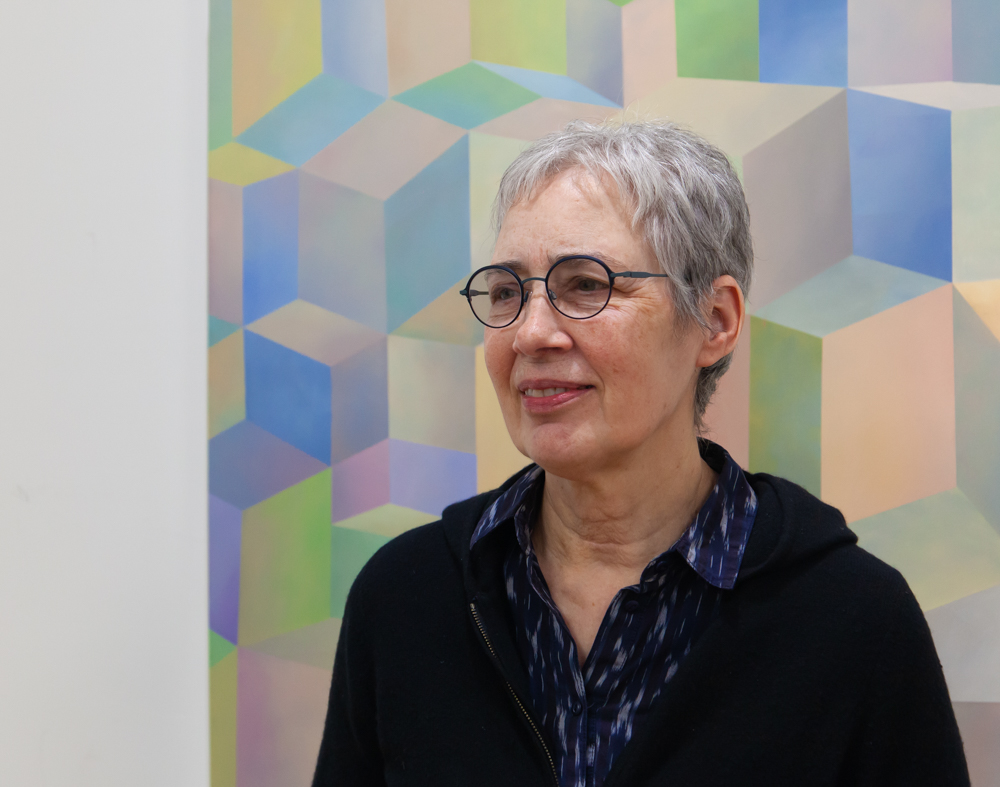 Philipstown painter never sure where she’ll end up

When Ann Provan starts a painting, she doesn’t know how it will turn out, and that’s fine with her.

Provan, whose solo exhibit, Inner Window, opens at the Garrison Art Center on March 26, makes what she describes as “intuitive geometric paintings that can have multiple interpretations.” They may include illusions of space, references to landscape or architecture, people or characters.

“There is uncertainty as to what it will look like and what the content will be,” she adds. “The painting goes through many transformations.”

Most of her paintings begin as drawings. Using colored pencils and sketchbooks, she draws while listening to music, often in the studio she and her husband, David, also an artist, built last year near their Philipstown home.

“The minute I start painting, it’s a different feeling working on larger canvases,” she says. “I try to work with it, tweak it, make adjustments, slowly, until it turns into what I think is an acceptable painting. Sometimes I get into a pickle and it just looks terrible, such as one recently in which I thought bold red and orange colors would be great together. I put a wash over it and it became beautiful, with vaporous colors.”

Raised in Berkeley, California, Provan earned bachelor’s and master’s degrees in fine arts from the San Francisco Art Institute. After her undergraduate years, she moved to France, ostensibly for a year. That turned into four years, first in Montpellier and then in Paris, where she studied French and other disciplines and worked as a model for designers such as Karl Lagerfeld and illustrator Antonio Lopez. It was Lopez who convinced Provan to pursue a graduate degree.

She wasn’t painting geometrically back then. Far from it. “I did figurative painting,” Provan recalls. “Little stories, kind of surreal imagery on paper, diary-like paintings about my life and dreams. They were kind of a fantasy, in a way. Then I moved to New York City in 1976 and I wanted to do abstract work right away, so I switched to sculpture.

“The buildings, the environment of New York is so overwhelming. It was fun to investigate, to make a change. I’d build 3-D pieces with wires based on shadows cast on the wall. They had a soft focus and felt ephemeral.”

It was while doing this type of work that Provan unexpectedly landed a solo show at The New Museum in Manhattan. It turned out to be a mixed bag.

“These shadow installations were too much, too quickly, a kind of product that I couldn’t sustain very well,” she says. “They required so much control — of lighting, of walls. I’m not good with electrical stuff, so I kind of let that go. After a while I went back to painting.”

Nevertheless, Provan found her work being increasingly recognized. She received a fellowship in sculpture and another in artist books, which went hand in hand, she says. “The book format is very sculptural. I would cut out and cut the pages, so pages underneath would show through. You can work with it in a very 3D way. I came across a whole world of people who do artist books.” The Museum of Modern Art bought some of her books for its collection.

Her work is also held at Franklin Furnace in Brooklyn, McGill University in Montreal, the Museum of the Art Institute of Chicago and the Cleveland Institute of Art.

Provan retired in 2018 from a day job she held for 30 years and built the studio soon after. “David does metalwork, and we really needed the space,” she says. “In 2020 I made so much work, because I finally had the time. I’m 73 and this has been a wonderful thing.”

Her work continues to evolve. “It’s something that is not architecture anymore; it’s more like weird visions or structures, more emotional,” she says. “The paint-handling is airy and ephemeral and it’s a lot about the sky, living in the pandemic, too, this feeling of isolation.

“I feel like I’m still learning how to be an artist,” she says. “It’s like having a hunch, the quietest voice speaking. I’m not a splash-the-paint in emotional ways type of painter. I wait until I hear that ‘You’ve got to do that’ voice. It’s not always the right move, but it’s a quiet inclination about what to do.”

The Garrison Art Center, located at 23 Garrison’s Landing, is open 10 a.m. to 5 p.m. from Tuesday to Sunday. See garrisonartcenter.org. An opening reception for Inner Window and an exhibit of sculpture and collage by Leslie Fandrich will be held from 5 to 7 p.m. on March 26; both shows will run through April 24.