A preliminary budget prepared by the superintendent of the Garrison school district to send to voters in May would require a property tax increase of 10 percent, well above a state-mandated cap of 2.16 percent.

The budget still must be approved by the school board, which has scheduled a vote for April 6 and a public hearing for May 4. There is more detail at bit.ly/gufs-budget-22. If the increase remains over the cap, state law requires that the budget be approved by at least 60 percent of voters, who will decide on May 17.

The Garrison superintendent, Carl Albano, said the district needs the cap override to fund his proposed $12.36 million budget for 2022-23, an increase of 6 percent from this year. The 2021-22 budget, which was below the cap, was approved by voters last year, 185-61.

If the district raised taxes only to the 2.16 percent cap, there would be a $1.3 million shortfall under the proposed budget, said Joe Jimick, the district business administrator.

Much of the jump in spending is driven by increases largely outside of district control, said Jimick, such as health insurance (up 14 percent), transportation (up 12 percent) and the tuition paid for its high school students. The district — which has 211 students from kindergarten through eighth grade — sends its graduating eighth graders to Haldane in Cold Spring or O’Neill in Highland Falls; it has 59 high school students this year and projects that will grow to 87 by 2024-25.

Haldane raised the tuition it charges Garrison by 32 percent over the past two years. Philip Benante, the superintendent at Haldane, said tuition it charges for Garrison students is now being calculated using a state formula rather than being negotiated. 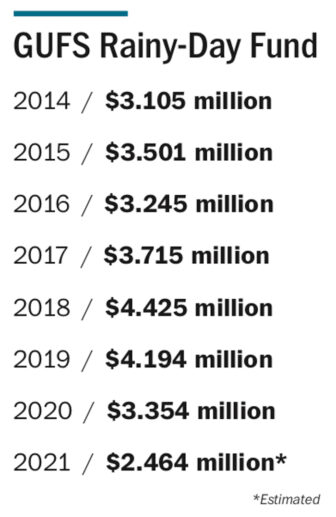 The proposed budget includes the loss of four positions: two teachers, a clerk and a facilities manager. Jimick said one retiring elementary teacher will not be replaced and a contract with a support teacher will not be renewed. He added that the district could save about $91,500 by cutting bus service for students who live within 2 miles of the school.

Garrison could close the gap by drawing $1.3 million from savings, but that could undermine the fiscal stability of the district and leave it vulnerable, said Jimick. “If we deplete all of our rainy-day funds and it rains, we’re stuck,” he said. “We don’t think that’s responsible.”

Even with increased taxes, Garrison’s rate would be substantially lower than every other district in Putnam County, Albano said. The next-lowest rate is levied by Haldane at $17.01 per $1,000. Brewster has the highest rate, at $27.74 per $1,000.

Another factor that has impacted the budget is a proposed change to the formula used to determine state aid that would cost Garrison nearly $100,000, or 9.58 percent less than it received this year, because it’s a relatively wealthy community that is not considered “high need,” Jimick said. By contrast, the median increase in aid to districts in Westchester and Putnam is expected to be 17 percent, including 11 percent at Haldane and 18 percent in Putnam Valley.

Garrison said it has appealed to state Assemblywoman Sandy Galef and state Sen. Sue Serino for assistance. As of March 23, the district had reduced the gap by booking a $121,000 energy-efficiency rebate as revenue; negotiating with Haldane to reduce its special education tuition to save $174,000; and, to save $59,000, negotiating a lower rate for vocational students who attend O’Neill for a half day. At the same time, it added $144,000 for a new special education student to the expense line.

In its presentation on March 23, the district said the proposed Hudson Valley Shakespeare Festival project that would take the property off the rolls because HVSF is tax-exempt would have no bearing on the amount of taxes the school collects, although it could affect individual tax bills. It noted that a payment-in-lieu-of-taxes agreement would decrease the levy but that would be negotiated by the Putnam County Industrial Development Agency.