Whether mountain lions roam the Highlands is a perennial hot-button issue; Liz Schevtchuk Armstrong wrote a thorough piece about it for this paper eight years ago. But, because there have seen a rash of unconfirmed sightings reported on Facebook over the past few months, it may be time for a refresher.

If you think you saw a mountain lion, it was a bobcat.

If you think you saw a bobcat, it was a housecat.

If you think you saw a housecat, it was three chipmunks in a trench coat.

Case closed, go ahead and do the crossword puzzle.

Mountain lions (aka pumas, panthers, cougars) have not had a native population in New York state since the late 19th century. The odds of seeing one here are very low, although not zero. More on that in a moment.

Bobcats, which are much smaller than mountain lions and sport a short, “bobbed” tail, do live in the Highlands. Like mountain lions, they are stealthy and secretive, so seeing one is quite unlikely. I still have never seen one myself in New York, although I did many years ago near Point Reyes Station in California, sitting patiently on the side of Route 1 as if it were waiting for a bus.

Bobcats are most active at dawn and dusk, but during the winter they also hunt during the day, since that’s when the mice and other small meals are out and about to take advantage of the relatively warmer daytime hours. The uptick in big cat sightings during the past few months isn’t coincidence; bobcats are more likely to be spotted when the weather is cold.

However, if you think you saw a bobcat, not a housecat, consider that bobcats are much smaller than you probably think they are. The average female weighs 15 to 30 pounds, with a length between 28 and 32 inches. My housecat, a longhaired Norwegian Forest Cat, weighs 22 pounds and is 30 inches long. If his outdoor activities were more than napping on the porch, there might be a few panicked calls to the Department of Environmental Conservation. Fifteen years ago, he was a stray under a Beacon porch, so there may be some of his ample, girthy kin still wandering about.

As it turns out, humans are not the greatest at estimating the size of an unexpected animal, which is why you read occasionally about the Beast of Barnet, the Beast of Bodmin Moor, the Pembrokeshire Panther and the Crystal Palace Puma. Practically every hill and dale in England has been the hangout for a mysterious, black, jaguar-like creature, despite the fact the island has not had a population of big cats since the saber-toothed tiger.

Thousands of these sightings are reported each year, not just by people leaving pubs but mayors and police officers, game wardens, farmers and zookeepers. The Welsh government created a Big Cat Sightings Unit. The Royal Marines have been deployed, helicopters have scanned the countryside, trail cameras and traps have been installed, and so far there has not been a single photo, paw print, tuft of fur or pile of scat. One beast hunter spent two days stuck in a cage of his own making; he survived on the raw meat he had set as bait. The only cats that any hunters have managed to document have been black house cats.

What’s going on? George Monbiot, who examined the British big-cat fallacy for his book Feral, has two hypotheses. The first is that people overestimate size if they are startled because they focus on the animal and not the surroundings such as trees, rocks and landmark that provide context.

His other hypothesis is that when we see a cat in the wild, something primal is triggered in our brains that alerts us that a big cat is dangerous and that we should err on the side of caution. “We lose little by seeing cats that do not exist,” Monbiot writes, “but lose a lot by failing to see those that do.”

In other words, if your brain has to make a split-second decision between being teased on social media for claiming you saw a mountain lion or being mauled in the woods, it opts for the former. 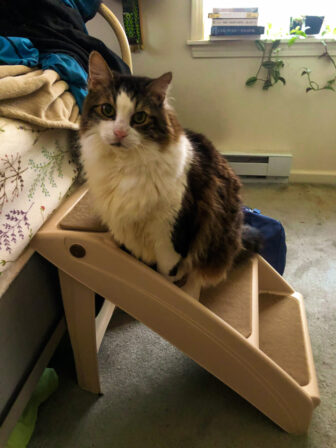 The author’s Norwegian Forest Cat is comparable in size and weight to a female bobcat.

Like the big-cat reports of Britain, mountain-lion sightings persist in the Highlands despite the absence of photos, paw prints, scat or eviscerated deer carcasses. There are also some who will swear that the Department of Environmental Conservation has seeded the area with mountain lions to control the deer population. The DEC insists it is not doing this — an explanation that satisfies no one since it’s exactly what the DEC would say if it were secretly releasing mountain lions. I would suggest that the reason we know it’s not true is because putting mountain lions in a heavily populated area is a hilariously terrible idea and there are far better ways to kill deer.

Mountain lions are territorial and solitary; a male tends not to travel more than about 100 square miles. They average a deer kill every two weeks, so each would kill about 26 deer a year, which seems not worth the trade-off with the panic that would ensue if a contraband cougar were discovered in an area swarming with hikers. Instead the DEC continues to encourage hunters to shoot does, which contribute more to overpopulation than bucks.

Like most conspiracy theories, the mountain lion myth springs from a kernel of truth. Thirty years ago, the state did release 89 lynx — which are similar to bobcats but slightly larger and a different species — in the Adirondacks. The goal wasn’t deer management (lynx mostly eat snowshoe hares) but to restore a native population driven out at the same time as mountain lions in the 19th century.

This plan did not go well. Some lynx starved because the snowshoe hare population wasn’t robust enough, some were shot by hunters during bobcat season, some fled to Canada and many got hit by cars.

That failure is one reason why the state has so far resisted calls to attempt a similar effort in the Adirondacks with mountain lions. One of its studies, done before the lynx experiment, concluded that even the “forever wild” Adirondacks has too much vehicle traffic to allow mountain lions to establish themselves, although some field biologists argue they could survive in the high peaks.

It’s not impossible for a mountain lion to show up in New York to stake out new territory in search of a mate it will never find, but it takes a Herculean effort. The biologist John Laundré called them Dead Cats Walking. “They are almost all Adams with absolutely no chance of finding an Eve in the promised land,” he wrote.

The last documented loner was spotted in 2011. It walked from South Dakota to the Adirondacks, an astonishing 1,500-mile journey. After it had crossed into Connecticut, it was killed by an SUV.

That is why I feel confident declaring there are no mountain lions in the Highlands. If there were, somebody would have run over it already.

Mountain lions, and wolves, are a touchy subject with those who work in wildlife and land management. They have strong feelings but rarely want to go on the record to share them. The idea of cougars and wolves in the Adirondacks has a thrilling and romantic appeal, but I live 150 miles away. I would be interested to know how Adirondacks residents feel about the idea; not everyone is comfortable with the same amount of wild in their wilderness.

5 thoughts on “Out There: Ghost Cats”