Several months ago, my husband and I went to supper at the home of our friends, Kristen and Eric. It was a last-minute invitation, a just-the-four-of-us get-together on a wistful November evening. Though COVID’s third wave had not yet gained force, we still felt keenly the preciousness of time with friends, and relished the chance for an evening in good company.

Our hosts insisted that the meal was humble, nothing splashy. But oh Lord, it blew me away: Salmon chowder, rich with corn, potatoes and bacon, served by firelight in lovely china soup bowls. It was so delicious and comforting, so just-what-the-doctor-ordered, that I felt as if I had spent the previous 18 months starving for that exact meal.

Eric (who’d cooked the chowder) wasn’t wrong to stress the dish’s humbleness. “Chowder is a staple dish — and ranks next to eggs as a makeshift meal for unexpected guests,” wrote Mabel G. Hall in the 1930s, as part of the Work Progress Administration’s Federal Writers’ Project, America Eats.

It’s worth noting that Hall was writing from the coast of Maine, a place where every kitchen would have had a supply of salt pork, potatoes and onions at hand, and where, moreover, seafood could live up to her standard: “Served in any form [it] must be not more than six hours out of the water.”

Despite the fact that chowder is arguably the quintessential New England dish, its exact origins are jumbled and vague. Some claim the name derives from a French word for a type of cauldron, chaudiere; others think it’s from an old Celtic word for a fishmonger, jowter. It may have first been made at sea, on fishing boats, as some stories have it. 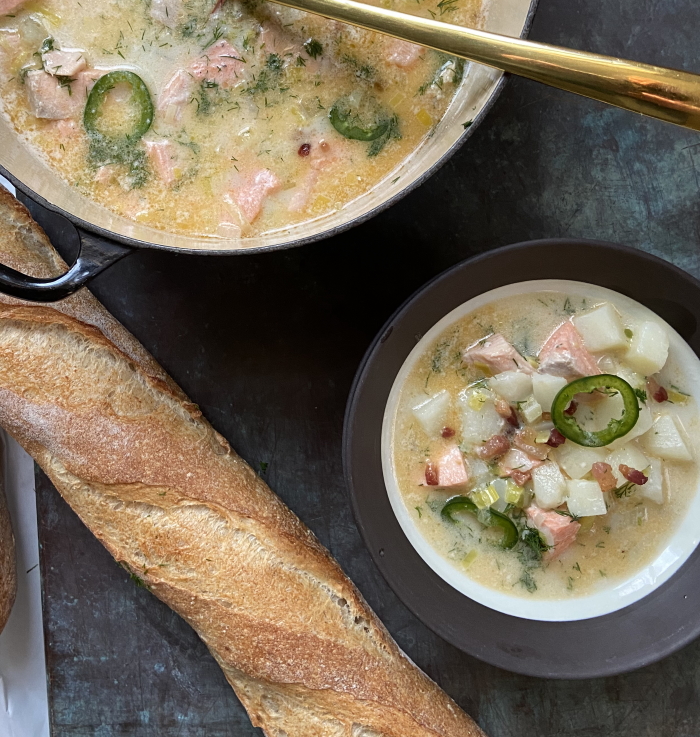 Others point out that chowder-like variations exist in almost every northern seaside culture. (Indeed, I grew up on an onion, potato, fish and milk soup that my mother had grown up eating in Finland, as had her mother before her.) Moreover, its quintessential ingredient, clams, were unfamiliar to America’s colonizers until they learned about them from the natives, who had been making them into stews for millennia — minus dairy, which arrived with settlers.

Last weekend, I came home from the market with a particularly lovely piece of salmon. It was Alaskan King salmon, so I suspect it had spent a smidge more than six hours exiled from its watery home. Still, it seemed a fish worth honoring, so I pulled up the recipe I’d asked Eric to send me the day after our supper.

At first glance, it gave me pause: Cream, butter and bacon don’t normally gallivant through my family suppers, let alone en masse. But then I did the math and realized that the total fat content per serving was less than a typical cheeseburger, so I sallied forth.

It’s worth noting here that I was grateful for the advice of a fish-chowder expert who suggested that, while clam chowder improves with reheating, fish chowder does not, and in fact should be fished-up to order. In other words, make your soup base, then, in a separate pot, heat to simmering only as much as your group will eat at one sitting; add a proportionate amount of fish, cook until not-quite done, then add the cream. (The fish will continue cooking in the heat of the liquid.) If you want seconds, do it again.

And if you want a friend to feel utterly, deliciously cared for, as I felt in November, by all means do it for them.

Adapted from The Modern Proper

Mince or grate one of the potatoes rather than dicing; as it cooks, it will dissolve and thicken the soup.


In a large, heavy stockpot, cook the bacon, stirring frequently, until crisp and golden. Using a slotted spoon, remove to a plate lined with paper towel and set aside. Discard all but 2 tablespoons of the bacon fat.

Melt 2 tablespoons butter with the bacon fat in the stockpot. Add the celery, leeks and jalapeno and cook, stirring regularly, until quite soft, about 8 minutes. Add the garlic and cook 2 minutes more. Add the stock, milk and potatoes, 2 teaspoons salt and ½ teaspoon pepper. Bring to a simmer and cook until the potatoes are nearly tender, 6 to 10 minutes (the exact time will depend on the freshness and variety of potato). Add the frozen corn and simmer 2 minutes more.

Transfer one-sitting’s worth of this mixture to a smaller saucepan (see note in text), and heat until barely boiling. Add proportionate amount of fish, reduce heat, cover and cook until nearly done, about 5 minutes; add proportionate quantity of cream and heat just until simmering. Mix in a dollop of butter and serve at once, topped with fresh herbs.