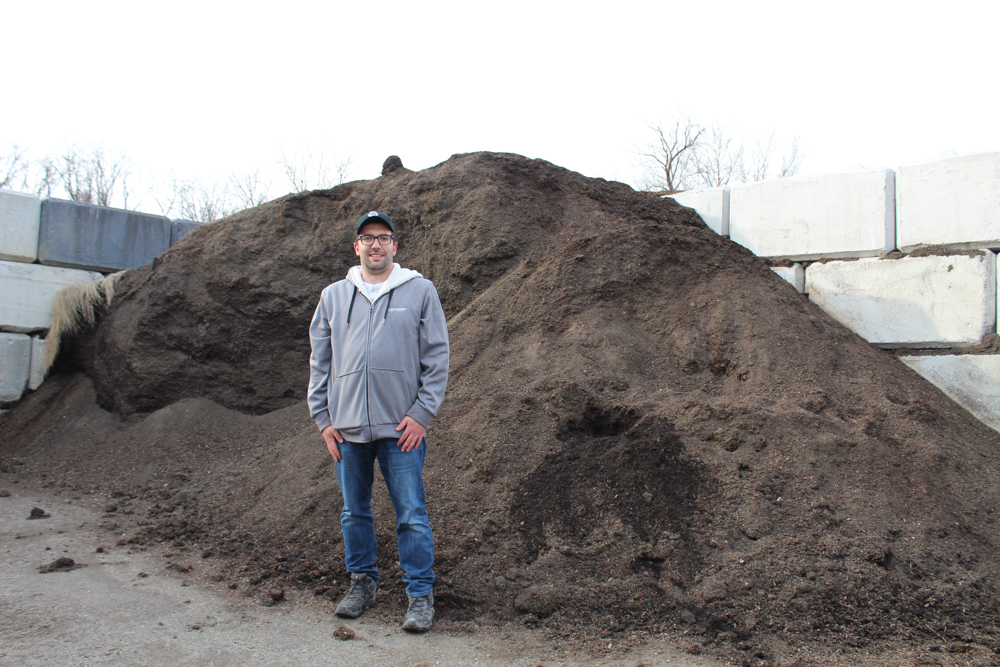 Anthony Carbone, president of Sustainable Materials Management, stands in front of a pile of finished compost made from wood chips and food scraps. (Photo by L. Sparks)

State law aims to reduce waste and feed the needy

At the rear of C.R.P. Sanitation’s facility off the Annsville Circle in Cortlandt Manor, Anthony Carbone showcases 10-foot-high piles of brown material that are undergoing an invisible process that requires little human intervention. In a month, what began as waste from landscapers and leftover food will become nutrient-rich compost.

Carbone’s family owns C.R.P., and it was he who turned an interest in composting into the founding of Sustainable Materials Management, the company’s organics recycling business, in September 2020. While showcasing the operation in February, Carbone recalled a conversation with a customer who bought 10 cubic yards of the company’s first-ever batch last spring.

“He sends us a picture of a 30-pound zucchini; he said he’s never grown zucchini that big,” said Carbone.

Sustainable Materials Management is among dozens of companies authorized by the state Department of Environmental Conservation to haul and recycle food waste under a state law that took effect Jan. 1.

The law mandates that businesses and institutions averaging more than 2 tons of wasted food each week donate what is edible and recycle scraps such as vegetable peelings if they are within 25 miles of a licensed recycler, such as Sustainable Materials Management.

The list of entities required to donate and recycle includes colleges such as Marist and Vassar; food distributors; grocery, hotel and restaurant chains, like Applebee’s and Adams Fairacre Farms; and Fishkill Correctional Facility and other state prisons.

Hospitals, nursing homes and public schools are some of the institutions exempt from the law, as is New York City, which has its own requirements. Businesses and institutions that would otherwise be eligible can petition the state for a hardship waiver.

Those that remain eligible are essential to achieving the state’s goals: to reduce food waste sent to landfills, where it contributes to the greenhouse gas methane, while feeding people in need and increasing composting, which can be used to grow more food.

Carbone said he has seen a recent uptick in food scrap donations, but is not sure it is driven by the law. At Second Chance Foods, a food-assistance organization based in Carmel, Executive Director Martha Elder said she had not yet seen a rise in donations, and noted some shortcomings with the legislation.

One problem, said Elder, is that it lacks funding for organizations like Second Chance that rely on volunteers using their personal vehicles to transport and store excess food. The state should also do more to educate stores about what they can donate, she said.

“Without this, stores tend to take the easy route and primarily donate only bakery items,” said Elder. “These items are not what we prefer to recover due to poor nutrition.”

Brianna Merrill, program coordinator for Hudson Valley AgriBusiness Development Corp., said the “jury is out” on the effects of the law but that the mandate at least represents a “normalizing” of donating.

“I get emails more often than I’d like about people saying, ‘How can we get more donations coming in?’” she said. “We don’t have a shortage of people who can take food.”

One of the organizations donating to FeedHV is Marist College in Poughkeepsie.

Although Marist is subject to the food-waste law, its dining services, run by Sodexho, has for years donated unused trays of cooked food and composted its scraps, said Nadia Castell, senior general manager for the company at Marist.

“As much as we try to make it so that it’s just the right amount of food that you prepare, you can’t predict what kids are going for,” she said.

During the fall semester, Marist started a program to educate students about food waste and the cost of filling their plates with food that goes uneaten. Nadia said she has seen much less waste this semester. Peelings and prepared food that cannot be donated because it has been exposed comprise most of what gets composted, she said.

Those are the kinds of ingredients that Sustainable Materials Management relishes.

Carbone had never heard of composting until October 2014. That month, one of C.R.P.’s trash clients, the Peekskill Brewery, held a festival designed to have zero waste, he said. The brewery hired Zero to Go, a Beacon firm run by Sarah Womer, who specializes in organizing events that generate as little waste as possible.

That event, which Carbone said drew 10,000 people and generated less than 10 bags of trash, marked the birth of Sustainable Materials Management.

The facility accepts two kinds of waste: food scraps and compostable products, such as bags and utensils. In addition to commercial haulers delivering scraps from large businesses and institutions, it sends a truck to pick up food waste once a week.

The company also allows individuals to register to drop off, at no charge, food scraps at bins sitting outside its main office. Carbone said the company had about 50 people registered.

“We’re very inclusive,” he said. “We take bones, shells, fish, meat — anything that came from something that was alive, we can compost it.”