I wanted to devote this column to a livestock ranch being planned for Garrison, but the property owner, who asked not to be identified, said the project won’t go to the Philipstown Planning Board for another year. She did allow that her 50-acre property will specialize in breeding and raising zeebuffo, the genetically engineered, striped ungulate that combines the best features of buffalo and zebra. 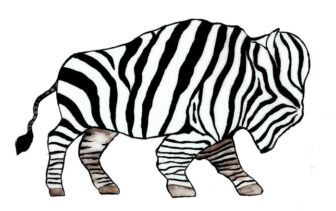 The logo for a zeebuffo ranch being proposed in Garrison. (Illustration by Scott Emerling)

The cross-species recently drew praise in The Ungulate Times and Tomorrow’s Science Today for yielding high-quality food while offering significant environmental benefit. The grass-fed, organically raised zeebuffo will be processed on-site, producing meat that is “gluten-free, high in protein, low in cholesterol, more tender than lamb — and delicious,” she said. And, unlike traditional beef cattle, zeebuffos don’t pass gas, a leading cause of climate change.

Look for the story a year from now. In the meantime, I’m writing about the pros and cons of being born April 1. Many years after he died, my mom told me that my dad asked the doctor to change my birth certificate by a day. He didn’t want me to endure a lifetime of bad jokes and pranks. I thought it was cool that he tried.

Truthfully, I’ve had little to endure beyond grade school, where the wittiest comment was always, “The joke was on your parents!”

When my sons were 4 and 7, they brought me a birthday breakfast in bed. How loving, I thought! But their giggling and squirming betrayed the conspiracy as they handed me my morning coffee, laced with salt, and a doughnut with Elmer’s Glue-All for icing. I admired the attempt and escaped unsalted and unglued.

I was less lucky later. They placed an egg in each of my shoes. They were not hard-boiled.

While working at the Conservation Authority in Ontario years ago, I was aware of the “surprise” birthday cake and all hands gathering in the boardroom. We did that for everyone. My colleague Ava had baked the cake, and bursting with pride, handed me the knife to cut the first slice. It didn’t cut easily but I didn’t want to embarrass Ava, so I tried harder. No dice. The cake was a perfectly shaped sponge — with great icing. We had a hearty laugh at my expense.

Since then, I have tried to turn the tables, being the prankster rather than the pranked.

One year, I sent a very serious email to my seven siblings and my sons, explaining that my parents and I had kept a secret for many years; I was actually born Feb. 29, but mom and dad didn’t want me to have a real birthday every four years, so they let on that I was born April 1.

My younger sister Penny totally bought it. She was so happy for me for having shared a secret with our parents for so long. When Drew, my older son, was also buying into the tale, his kid brother, Blair, wisely told him to note the date I had sent the email.

Ten years ago, I wrote in this paper about a runaway Russian spacecraft that dumped its fuel on the surface of the full moon, leaving a distinct streak across it that lasted only seconds. A Philipstown woman, I reported, won a major national award for being the only civilian to capture the streak in a photo. At least one reader figured out that the name I gave the Russian spaceship, лунный розыгрыш, translated as “moon hoax.”

Perhaps my best work was a story during the Hudson River Quadricentennial about a U.S. Army Corps of Engineers’ plan to dam the river, drain it and call for volunteers to reclaim, among other things, a cargo of antique toys from a ship that sank off Bannerman’s Island in the late 19th century. When an antique dealer told me he hoped to acquire some of the toys, I knew I had done my job.

The origin of April Fool’s Day may date to 1582, when France abandoned a calendar that began in April, and adopted the Gregorian calendar, with the year beginning Jan. 1. Legend has it that those who were slow to adapt became the butt of jokes. Reports that the whoopie cushion was invented around that same time are suspect; it’s probably much older.

As a fact-driven journalist who serves highly intelligent readers, I can assure you this column is totally truthful. Now, I’m off to celebrate my birthday at Doug’s Pretty Good Pub, where the zeebuffo burgers are free until 8 p.m.

Satire: Humorous / satirical article that is not intended to be understood as factual.