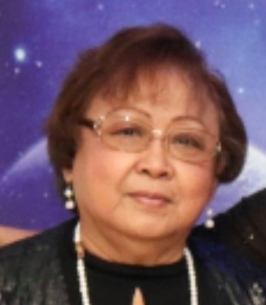 Gliceria was born in the Philippines on Dec. 21, 1945, the daughter of Simon and Francisca (Caparas) Bagtas. She attended Jose Rizal High School at Arellano University in Manila and received her bachelor’s degree in elementary education in 1965 and a bachelor’s degree in education with a major in communication arts in Filipino and a minor in communication arts in English in 1969 from Arellano University.

In 1987, she received her bachelor of laws from San Sebastian College in Manila. In addition, she also received her master’s in theology from Maryhill School of Theology in the Philippines, and a master’s degree in education, specializing in early childhood education, from the City College of New York, Touro College.

Gles was a member of many groups and organizations, including Lions International and Handmaids of the Lord. She was a former president of the Parent Teachers Association at the Immaculate Heart of Mary College, a former vice president for legal affairs at the University of Santo Tomas Faculty Union, and former barangay secretary at Barangay Kapitolyo Pasig City Council. She was also former secretary for her Vigilant Christian Team in the Philippines. She was a parishioner at St. Mary, Mother of the Church in Fishkill.

Besides having a remarkably busy working life, Gles also knew how to have fun. She loved to cook, sing, watch her favorite TV series, such as Law and Order: SVU and Organized Crime, Chicago PD and Lonestar: 911, and Filipino cooking shows on YouTube. She also loved video-calling with her family in the Philippines and New Zealand multiple times every day — without fail — and loved hearing stories about her great-grandchildren. She also liked to plant, although she claimed she did not have a green thumb and would just let her daughter do it.

In addition, she is survived by her siblings: Simeon Bagtas (Purisima) of Reno, Nevada; Constancia Raymundo of Navotas, Philippines; Demetrio Bagtas of Navotas; and Epifania Cartegena (Salvador) of Antipolo, Philippines.

In addition to her parents, her children Reina Baldres and Jonas Baldres; her first husband, Julio Baldres; her second husband, William Walsh; and her brothers, Raymundo Bagtas, Sisenando Bagtas and Alfonso Bagtas, died before her.

A funeral service was held on April 1 at McHoul Funeral Home in Fishkill. She will be interred in the Philippines.