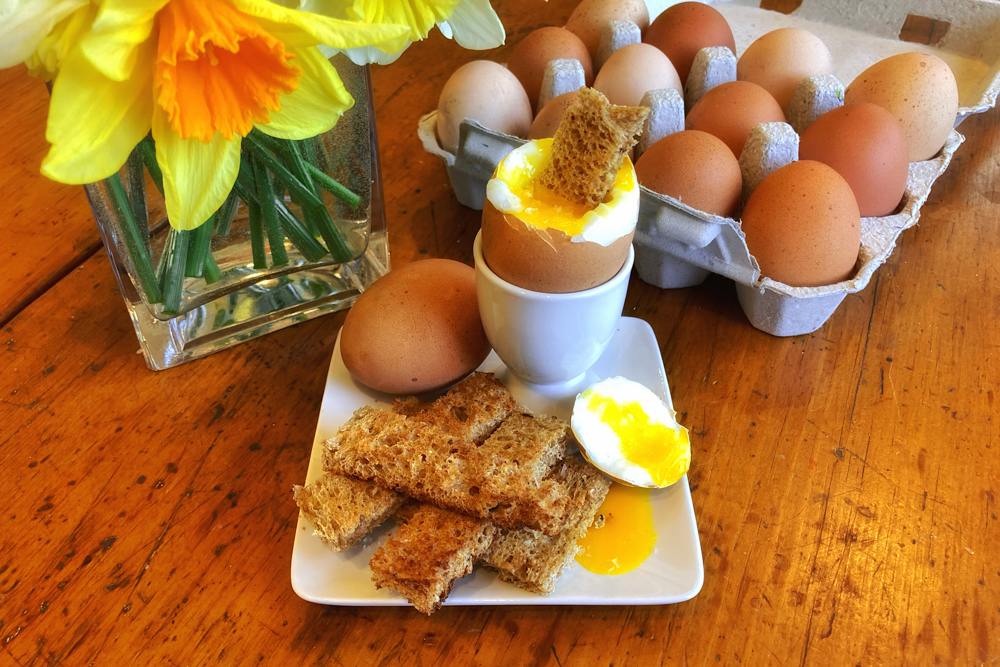 It started with a hesitant but desperate entreaty from my neighbor: “The hens are producing like crazy. How many dozen would you like?”

Dozen? I do love me some fresh yard eggs, but I am a household of one. And although I recently found a local source that delivers a regular supply of multi-hued, orange-yolked wonders, free trumps the already low price I was paying. I acquiesced, thankful for one more of the small, welcomed blessings of living in a still-somewhat-rural Hudson Valley.

It’s the time of year: increasing hours of daylight and warmer temperatures stir more than just human spirits. The same Austrolarps (one of the more prolific breeds of laying hens) had been, if not dormant for the winter months, certainly less ovo-generative. Seemingly, production had picked up exponentially.

Science insists that it is the rare hen who can lay more than one egg a day, but compared to recent history, the henhouse output belied that factoid. Then again, maybe it’s less that laying picks up in the spring, rather than it drops off in winter.

Still, it’s telling that spring’s first major holiday is secularly observed by the wholesale dyeing and hiding of eggs (as if anyone actually ever eats them) among other festive observances of fertility and fecundity.

By definition, the egg, an ovum, designates the female reproductive cell of most any living creature. All God’s creatures — aquatic, amphibian and terrestrial — got ’em. Eggs have been around for 340 million years, while homo sapiens for a mere 300,000. We have been partial to the eggs of other species as a source of protein for almost as long.

The red junglefowl (Gallus gallus), native to Southeast Asia, is thought to be the earliest ancestor of our egg-laying chickens, which became Gallus gallus domesticus about 8,000 BCE. They were domesticated for fighting and ceremonies and not raised as food until 4,000 BCE.

The reproductive nucleus is a spot that is barely 1 percent of the yolk, the primary source of vitamin and mineral nutrients. The 6-to-8 grams of protein in a 70-calorie egg are spread equally throughout the yolk and egg white.

About those whites: About 90 percent is water. When eggs are fresh, the proteins and water are in a fairly uniform suspension. But as an egg ages, the white separates a bit, giving you a pretty handy way to judge how fresh your eggs are: the runnier, the older the egg.

Let’s talk yolks. Honestly, if eggs were made only of whites, would you even be interested? Research suggests the cholesterol in eggs, mainly found in the yolks, does not impact blood serum cholesterol levels to the extent once believed. Those who still choose to err on the side of caution suggest a half-dozen eggs a week is acceptable.

Science aside, eggs are one of the most important culinary staples, capable of a headlining role but possibly most useful in combination with other ingredients to create wondrous sauces, souffles, custards and baked goods, both sweet and savory, any time, day or night.

This dish asks nothing but a pinch of salt and crisp toast spears — the Brits call them “soldiers” — to scoop out the good stuff and a small spoon to finish off the rest. Now, that’s a celebration.

1. Fill a medium saucepan with enough water to cover eggs by an inch or so and bring it to a steady medium boil. (You will wait for the water to boil before adding the eggs.)

2. Make a very small hole (I use a pushpin) in the wide end of each room-temperature egg. (This will reduce the chances of the shell cracking as the white cooks and expands.) Carefully lower the eggs into the pot using a spoon.

3. While the eggs cook, toast the bread slices. Boil eggs for 5 minutes only to achieve a runny yolk. When the eggs are done, remove them from pan and drain quickly. Crack or slice the ½-inch or so from the small end of an egg. (A quick, definitive whack with a large, sharp knife makes short work of this in the absence of those cute little egg scissors that will just end up taking space in your kitchen drawer.)

4. Serve one at a time, preferably in a proper egg cup. Salt (and pepper if you must) to taste, dipping the soldiers in the yolk and finishing the rest with a spoon.