Rusty Stahl, who lives in Beacon, is the founder and president of Fund the People. 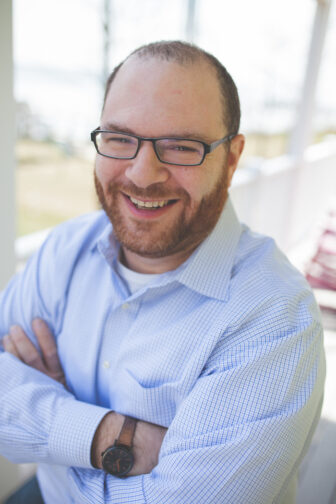 You describe yourself as a “philanthropy geek.” What drew you to the field?

I was an American studies major at George Washington University [in Washington, D.C.] but didn’t want to be a museum curator or an academic. I was trying to figure out how one goes about having a career in social change without going into government. After I graduated, I was selected for a fellowship at the Center on Philanthropy at Indiana University, and that set me on the path.

Did you have any role models for the work?

My grandfather spent his life in the labor movement. Even in his 80s, in a wheelchair, he was still committed — my grandmother called his memorial service “Ben’s last meeting.” I was interested in the idea of community service as something young people should learn and practice, and I was interested in the infrastructure — in college, I convened all the service chairs of various student organizations and said, “We should be talking to each other.” I didn’t want to get stuck in a particular issue; I wanted to figure out how they are connected. My grandfather did that — he tried to bring together labor and the women’s movement and civil rights. In the early ’80s, my dad helped nonprofits to computerize their systems. In some way that idea seeped into me — we need to invest in how things are done, not just what is done.

Philanthropists want to make sure that their money helps the cause; everyone wants it to go to “impact” and programs and not “bureaucracy.” That’s different from for-profit businesses, in which people who invest know the money goes into a big pot and the business people figure out how it will be deployed. With nearly any nonprofit, the biggest line item is staff, and the smallest line item is program expenses. Good businesses know to invest in their employees for long-term profit. Nonprofits often don’t have that structure, and philanthropists don’t have that mindset.

In your podcast, you discuss “the overhead myth.” What is that?

There’s a tendency among funders to focus on minimizing “overhead” — which contributes to a system that exploits idealistic people. Nobody thinks anyone should be getting rich at a nonprofit, but nobody should have to be poor, either, because you lose a lot of potential leaders from poor and working-class communities. Overhead is not a good way to measure the effectiveness of a nonprofit, in large part because there is no standard for what the ratio should be or what should be included. That’s not to say there isn’t corruption in the nonprofit world. But if you’re going to have the IRS, which is in charge of collecting taxes, also be in charge of overseeing institutions that don’t pay taxes, it needs more capacity.

Do you get pushback from funders?

Some funders and nonprofit leaders worry, well, if we invest in an employee, and he or she leaves, have we wasted our investment? Or if we invest in an employee, how do we measure if it makes an impact? I say, you shouldn’t invest in an employee, you should invest in anyone who has the job, including interns. You have to invest in the workforce, not just one charismatic person who is expected to do miracles. You invest in everyone while they’re there and it will be known as a great place to work and you’ll get better and better people. I also hear that if we invest in employees, they’ll get better and leave for other jobs. But if you don’t invest, everyone will be miserable and leave, and that turnover will hurt the programming. We need to flip the equation: The employees are the bedrock upon which the programs rest. If you think of it that way, if 90 percent of a grant must be spent on programming and only 10 percent is allowed for “overhead,” it seems upside down.