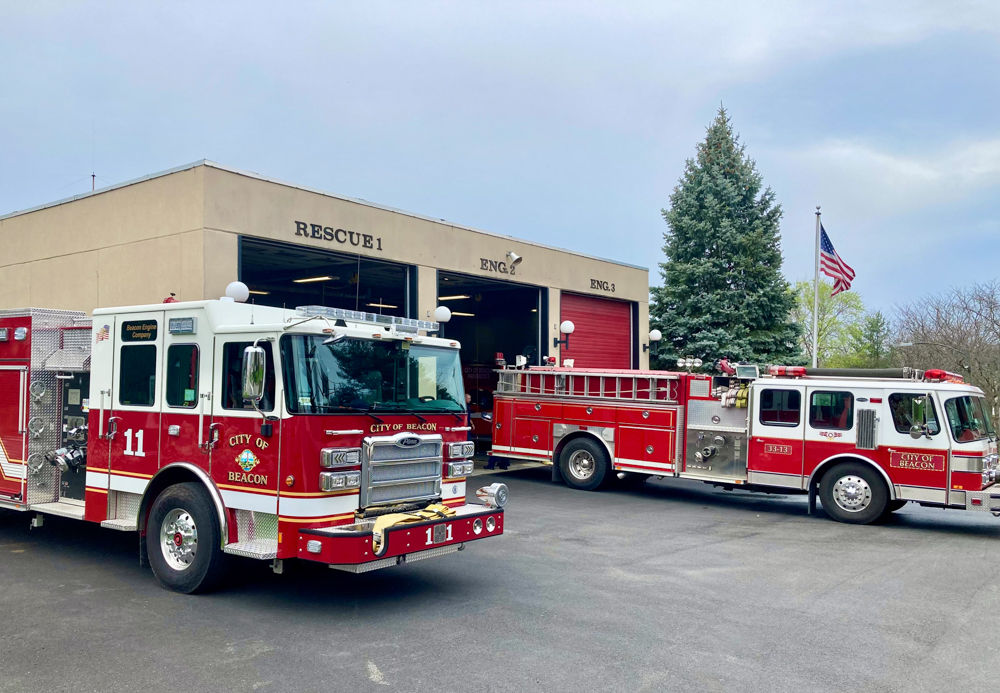 Some of Beacon’s fire engines cannot fully fit into the bays at the Tompkins Hose station. (Photo by J. Simms)

The construction of a modern, centralized Beacon fire station is expected to begin in 2023 — more than 15 years after discussion about the project began.

Under a plan being prepared for the City Council, the Lewis Tompkins Hose Co. station, a 10,000-square-foot building constructed in the 1980s, would be gutted, refurbished and enlarged, with three new bays that will allow engines to enter and exit from Route 9D. The trucks must now negotiate a tight squeeze on South Avenue.

City Administrator Chris White said he expects to bring a five-year capital proposal to the council by the end of May with details about how the city could absorb its nearly $11 million price tag. Construction would take about 14 months and include a 6,500-square-foot addition to the north end of the station.

The council two years ago hired Mitchell Associates Architects, an Albany County firm, to design the renovations. White said he will ask the council on Monday (April 25) to approve a $250,000 contract for Mitchell’s ongoing design and the implementation of the Tompkins upgrade. It will cost about $1 million to hire the firm to oversee construction.

During the council’s April 11 workshop, White said the city would need to come up with a “thoughtful way” of digesting the cost of the project over several years. “We’re going to have to balance it, because we still have to buy plows and police vehicles and we have parks to invest in,” he said.

The city has commissioned various studies since 2006 to consolidate its three fire stations. It considered building a station at the Memorial Park dog run site or on the edge of the Sargent Elementary School campus.

In 2020, just before the pandemic shutdown, the council hired several new firefighters and voted to close the 130-year-old Beacon Engine station on East Main Street. The moves allowed the fire department for the first time to have two firefighters on duty at Tompkins Hose and Mase Hook and Ladder at 425 Main St. around the clock.

Once the Tompkins Hose renovations are complete, the 6,000-square-foot Mase station, which was built in the 1920s, would be closed, White said. “We’re basically taking the space that isn’t readily usable for modern fire operations [at Mase] and putting it all into one building,” he said.

In a presentation to the council on April 11, Bob Mitchell, the design firm principal, called the Tompkins Hose building “functionally obsolete.” For instance, he said, it lacks a system to redirect exhaust from the engine bays and adequate decontamination facilities, making it unsafe for firefighters.

According to the plans, the front of the station on South Avenue will be downsized to two bays, one for an ambulance and the other for a smaller fire apparatus. At the same time, three bays for ladder trucks and fire engines will be constructed on the other side of the building, which faces Route 9D.

The renovated station will include training facilities, an exercise room, a dining room, a conference room and a sprinkler system — features lacking in the existing building. It would also add three offices; Chief Gary Van Voorhis’ office at the current station is a converted closet.

The building will include six bedrooms for firefighters working overnight, a modernized “mission-control” dispatch office and gender-neutral restrooms, according to the plans. At present, the main floor of the Tompkins station does not have a women’s bathroom.

In addition, the city-owned parking lot behind the station would be paved and restriped, providing about 55 public spaces.

Mitchell recommended that the city not delay the project any further, noting that the cost of construction has increased by more than 150 percent since a 2006 consolidation study.  “It’s not going to get cheaper,” he said.