To a visitor, Beacon may appear to be booming: luxury apartments, high-end shops, trendy eateries and an internationally renowned museum.

But a draft report by a state climate-justice working group concludes the foundation of that prosperity may be shaky. The census tracts of the City of Beacon rank higher than much of the state in flooding risk, diesel pollution, housing-cost burden, environmental remediation sites and how long it takes to reach a hospital, among other criteria.

In fact, the tract that includes the waterfront, southern Beacon and Dutchess Junction has a higher environmental burden than 98 percent of the state, making it especially susceptible to the effects of climate change, the report says. As a result, Beacon fits the measures to be considered a “disadvantaged community.”

“Climate change will impact everybody, but not everyone will be impacted equally,” notes Adriana Espinoza, the deputy commissioner for equity and justice at the state Department of Environmental Conservation, who helped prepare the report.

As part of the state’s ambitious Climate Leadership and Community Protection Act, enacted in 2019, New York is required to get 70 percent of its power from renewable sources by 2030 and reach zero-emissions electricity by 2040 and net-zero greenhouse gas emissions by 2050. But the law also set an environmental-justice target that aims for 40 percent of state spending on clean energy to accrue in communities defined as disadvantaged.

The draft of another study released earlier this year offered a plan for the state to achieve these goals, but it was up to the climate-justice panel to define “disadvantaged.” It came up with 45 criteria in two areas: population characteristics and vulnerability, and environmental burden and climate change risk. 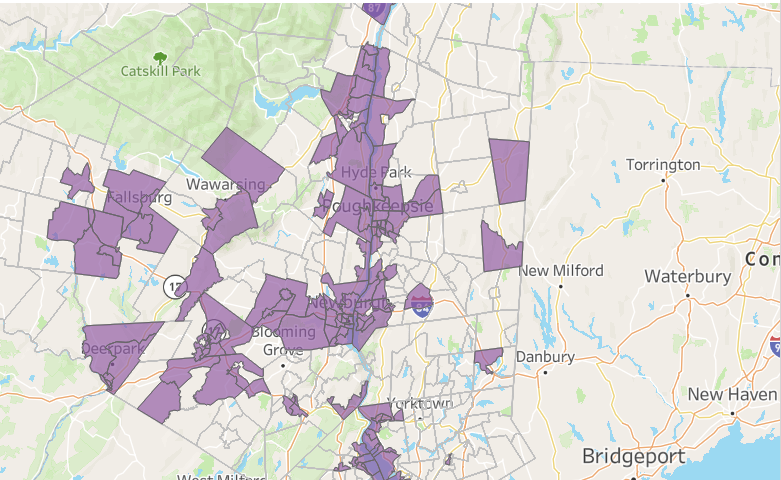 Disadvantaged census tracts in the Hudson Valley are shown in purple

Disadvantaged communities have higher concentrations of people who are low-income, unemployed, paying more of their income in rent, less likely to own a home and less educated, and are especially vulnerable to the impacts of climate change, Espinoza explained.

About a third of the state’s census tracts qualified, including 45 percent in the Mid-Hudson Valley, about the same as found in New York City. In Putnam County, Brewster Hills was the sole tract to meet the criteria, mostly because of a high level of pollution, minority Hispanic population and fewer people with health insurance.

The decision by the working group to include race as a criterion is notable. Both the federal government and California, when working on climate-justice targets and definitions, shied away from race to avoid legal challenges. But the New York group said it felt it was impossible to identify disadvantaged communities and environmental justice without considering race.

“There is decades of social science research that shows that income and race are both important indicators for understanding disproportionate environmental burdens,” said Espinoza. “Even when you remove income, race is a huge driver for being able to identify disproportionately polluted communities.”

Any funding sent to Beacon because of its status could be used for projects such as weatherization; zero- and low-emission transportation; “microgrids” that can disconnect from the power grid to operate autonomously; renewable energy; and the treatment of medical conditions exacerbated by climate change, such as asthma.

The draft plan is open for public comment through July 7. To read it, or make a comment, see climate.ny.gov/DAC-Criteria. A public hearing will be held at noon on May 25 at Beulah Baptist Church, 92 Catharine St. in Poughkeepsie, and a virtual hearing for the Hudson Valley has been scheduled for June 29. See  climate.ny.gov/CAC-Meetings-and-Materials.