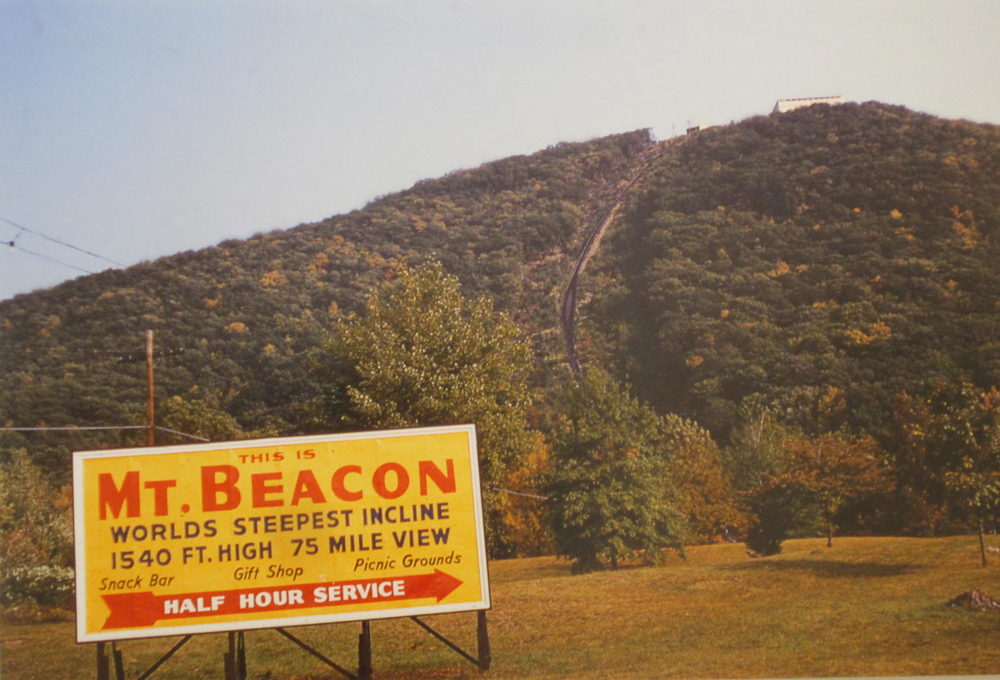 The world’s steepest incline railway has encountered a hill that it couldn’t climb.

This week, the nonprofit Mount Beacon Incline Railway Restoration Society, which had worked since 1996 to reopen the attraction, announced its closure.

The railway, built in 1902, carried millions of passengers to the summit of Mount Beacon during its 76 years in operation. It was damaged by fire and rebuilt several times before finally closing in 1978. 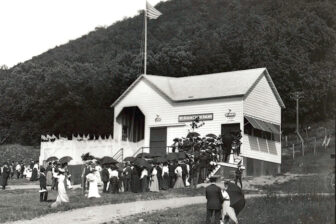 After voting to dissolve, the society’s board donated its remaining funds and archive to the Beacon Historical Society, said President Jeff McHugh. A selection of the material will be on display at BHS, 61 Leonard St., from May 14 to July 30.

The Mount Beacon Incline Railway Restoration Society grew from a grassroots group of volunteers who in 2009 created a board of directors and named a CEO. By 2014, it had $250,000 in the bank, including a $100,000 state grant, and an ambitious $20 million capital plan to restore the railway with two 45-passenger carriages and build a 6,000-square-foot center at the summit and a visitor center at the lower park.

But McHugh said the project encountered numerous obstacles. It needed approvals from the state parks department and Scenic Hudson, which owns the land. McHugh said that the group also quickly realized that $20 million would not be enough to provide for long-term maintenance.

The city was also changing. When the society formed, Dia:Beacon was still years away and Beacon lacked attractions. Today it is not lacking for visitors, especially on summer weekends. Adding a railway that would take hundreds of thousands of people annually to the top of Mount Beacon began to make less and less sense, he said. 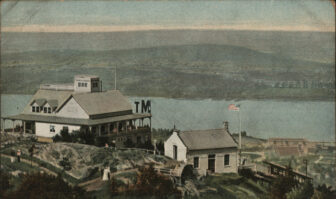 Since part of the society’s mission was also to preserve the history of the railway, McHugh said the board was happy that the archives will become part of the BHS collection. The railway was an engineering triumph in its time.

McHugh said he sometimes ponders what would have happened had the incline not suffered a series of devastating fires over the decades, including a final blaze in 1983 that burned what remained of the attraction from top to bottom. Had it continued to draw visitors, “we would have a totally different city,” he said.

The Rise and Fall of the Incline Railway

Two New Hampshire men, Weldon Weston and Henry George, who hiked Mount Beacon in the 1890s, incorporate the Mount Beacon on Hudson Association to explore its development. One of their investors, Jesse Pattee, founds the Mount Beacon Incline Railway.

Construction begins with the clearing of a path through the forest for 2,200 feet of track. Engineered by the Otis Elevator Co., the railway will operate with two carriages pulled by cables, weights, a pulley and electric motors. The average grade of the route is 65 percent. A subcontractor, the Mohawk Construction Co., sends a crew of 73 men to work through the winter. The powerhouse and other structures are built with bricks carried up the mountain by mules. 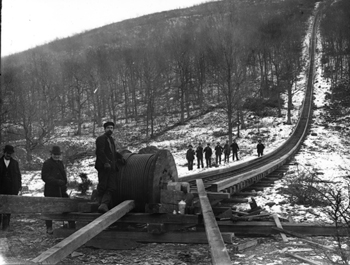 Workers install cable during the winter of 1901-02 during construction of the railway.

The railway, which costs $165,000 to complete (about $5.6 million today), opens on Memorial Day. Sixteen hundred people ride to the summit, where they are rewarded with a panoramic view, a casino with a restaurant and dance hall, and a small zoo. The incline also will support a cottage colony of about 20 families by giving them a way to transport lumber and supplies up the mountain. 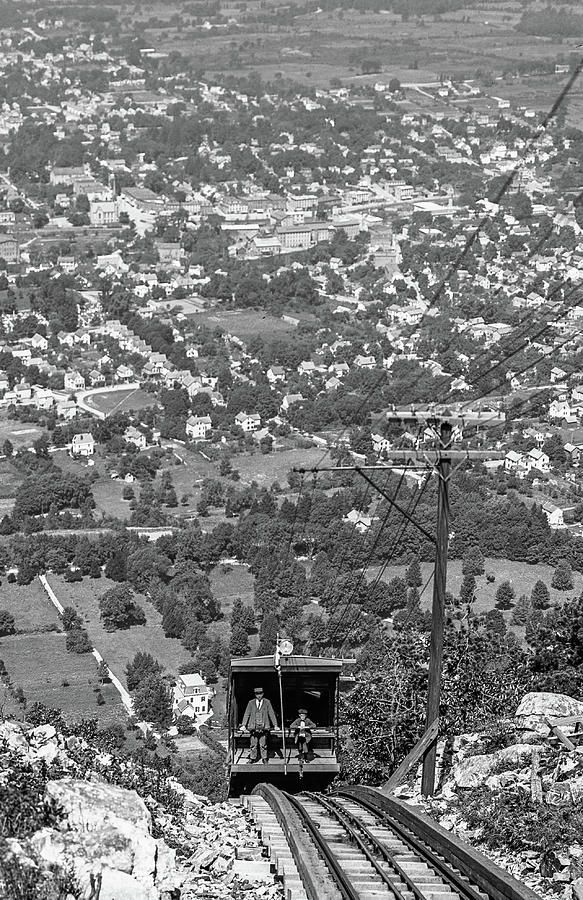 One of the two incline cars climbs the mountain in 1903.

The 60-room Beaconcrest Hotel opens adjacent to the casino.

The director D.W. Griffith, who later made his name with The Birth of a Nation (1915), films three silent movies atop Mount Beacon, using the railway and pack animals to get his crew and equipment to the summit.

The railway has a banner year, transporting more than 110,000 visitors who arrive by automobile, train and steamship.

1927
The hotel and casino are destroyed by fire. The casino is rebuilt, opening in 1928, but not the hotel.

1936
A brush fire destroys one of the two carriages and 300 feet of track. The New York Times describes several passengers leaping from the car as it advanced into the flames. The carriage is rebuilt without a roof.

1947
A 2-mile ski trail, which includes a 60-foot jump, is set to open once there is a 4-inch snow base. Skiers could return on the incline railway or stop three-quarters of the way down to catch a tow line. 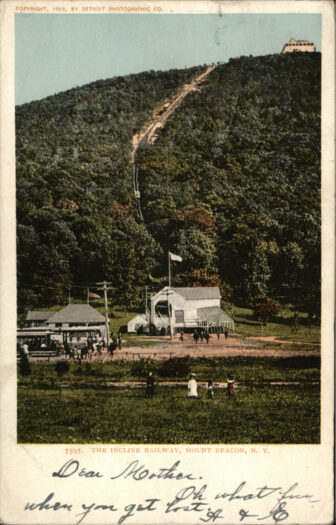 1960
The railway’s president, J.M. Lodge, sells it to a group of New York investors called Mountaintop Lands, who plan to redevelop it. This never occurs.

1965-67
The Dutchess Ski Area uses the railway to shuttle skiers until it builds a chairlift.

1967
A railway car and the lower station are destroyed by fire.

1972
The state closes the railway because of unsanitary conditions at the upper station.

1978
The owners lose the title in a tax sale. Service ends. The two cars are parked mid-track to prevent vandalism. Over 76 years, the attraction is estimated to have carried 3 million people to the summit. 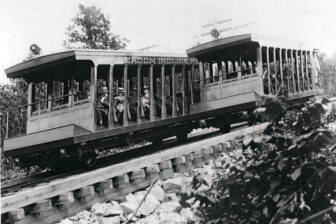 Cars passing each other on the incline (Beacon Historical Society)

1982
The railway and its upper powerhouse are placed on the National Register of Historic Places.

1983
The railway is destroyed by a fire, from top to bottom, including the casino, lower station, carriages, track and powerhouse. Arson is suspected.

1995
Scenic Hudson begins its purchase of 234 acres on Mount Beacon, including the ruins.

2000
The society becomes a nonprofit and historical society. Led by Steve Gold and Andy Chiusano, it elects its first board.

2009
The society appoints a CEO and president.

2014
After raising $250,000 in five years, the restoration society announces plans for a $20 million capital campaign. Jeff McHugh, the vice president, says the restoration could be accomplished in four to six years.

Incline railway, 1957, with the Haas family

4 thoughts on “End of the Line”