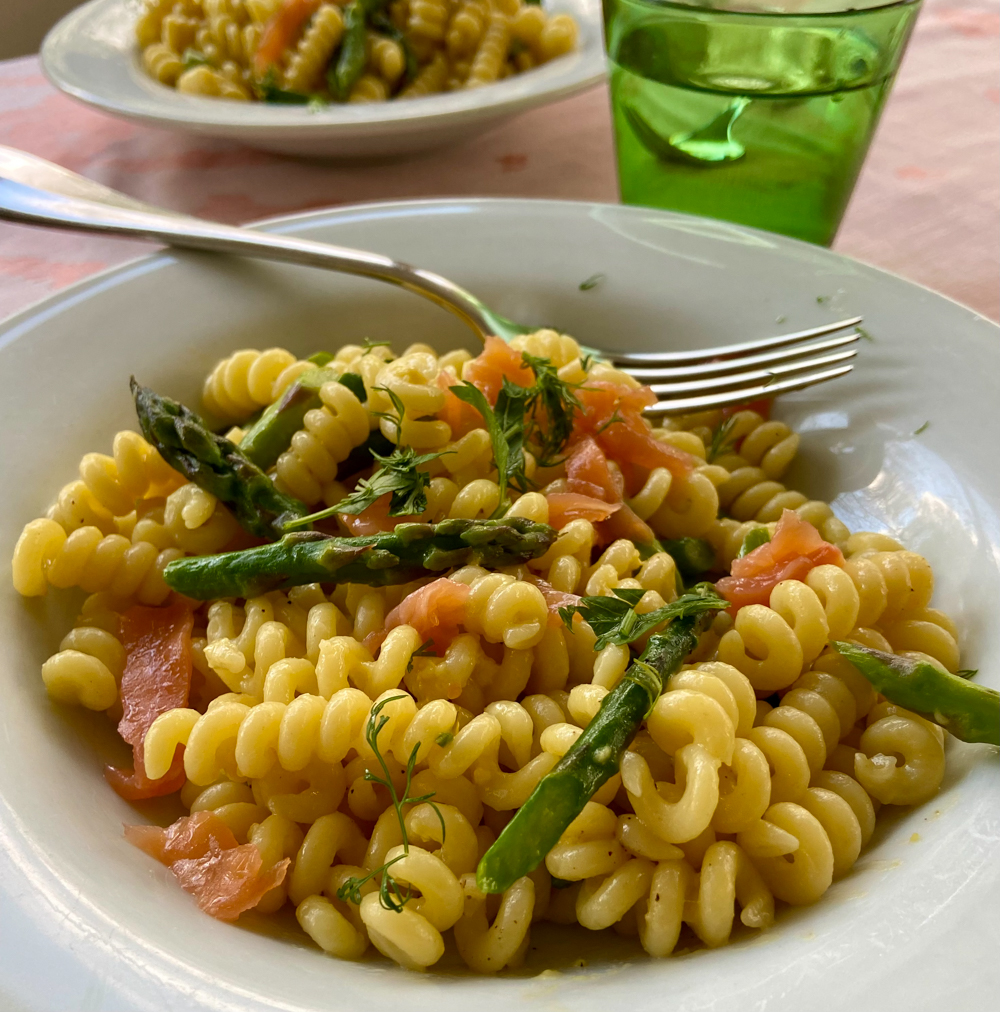 Pasta with Asparagus and Salmon ‘Carbonara’

Last week, I came across the following entry on a coffee shop menu in Richmond, Indiana: “Soups of the Day. Fresh every day! Select from two homemade soups.” This pleased me, as I was very much in the mood for homemade soup just then. Yet I was puzzled by the red Campbell’s logo printed alongside the listing, so I asked the waitress to clarify what they served.

I grew up on Campbell’s soups, and loved them dearly. I credit them for painlessly introducing me to everything from mushrooms to clams. Campbell’s soups topped my favorite meatloaf, baked chicken and casseroles, and established forever my paradigm for the perfect potato cube. Thanks to their cold consommé, I remain a lifelong fan of savory gelatins and aspics. I do not, however, think of them as either “fresh” or “homemade.”

Among the many things I love/hate about Richmond, Indiana, where I grew up, is its complete lack of precision with regard to food, combined with its unstinting generosity.

That same coffee shop, for example, offers bottomless pots of coffee. You can park yourself in a booth for half a day, drinking cup after cup from a thermal pot that is continually refilled at no extra charge, and feel as welcome when you jitterbug out the door at midnight as you did when you first crossed the threshold at noon. My friends and I used to pass long evenings there in our late teens, chasing the caffeine with towering wedges of fresh, homemade pie, which in those days meant pie that was made from scratch, on premises.

The bottomless coffee is still served. The pie, alas, is not.

The world already contains enough pithy phrases about going home again, and does not need another from me. But I will say this: Revisiting my hometown after a quarter-century seemed to lay bare some underlying topography of my character. I experienced old haunts as a series of pushes and pulls — intense longings interspersed with equally intense urges to flee at warp speed.

The reason I was in the Midwest was that Dosi, our youngest, was visiting nearby colleges before making his final decision about where to go next year. Richmond was a detour, a distraction, and a chance for me to prattle on to him about random, weird things that had or hadn’t changed: “Oh my God, the Dairy Queen!”

But this side trip also nudged loose something deeper. For many of us, after all, college marks the first clear break in life’s trajectory. It’s a time when we peel our patterns and habits away from the grooves that shaped them, and realize that they’re now an inextricable part of us. It’s when we gather up our best memories and place them in our hearts to carry forward to the next phase.

One Midwestern custom that I have not opted to carry in my heart (or anywhere else) is the region’s tendency to equate “cheese” with “fancy.” For dinner that night, Dosi and I visited a new restaurant down by the old train station.

“That’s where I used to catch the Amtrak to New York!”

Among the menu’s offerings was wild-caught Alaskan sockeye salmon, “stuffed to the gills” with cream cheese and bacon, and covered in a smoked Gouda cheese sauce. I said, “That’s a very Indiana thing to do to a piece of wild-caught salmon.”

Dosi ordered spaghetti carbonara, a favorite. I had chicken. We both had asparagus, which we love. Our meals were satisfying, fresh, generous and made from scratch on premises. They also, like so many things from my childhood, compelled me to come up with my own, new version, which I hope might have some small impact on Dosi.

Pasta with Asparagus and Salmon ‘Carbonara’

Bring a large pot of salted water to boil. Prepare an ice bath. Meanwhile, melt the butter in a large skillet over medium-low heat. Add the olive oil and garlic cloves, reduce the heat to low and cook, stirring occasionally, allowing the garlic to infuse the warm oil with flavor.

Break the eggs into the same bowl you will serve the pasta in, and beat them with a fork or whisk. Add a few grindings of pepper. Set aside.

Place the asparagus in a steamer basket and submerge in the boiling water for 2 to 3 minutes. Transfer to the ice bath to stop its cooking, then use the same pot of boiling water to cook the pasta according to package directions.

A few minutes before the pasta is done, transfer the asparagus to the oil-and-butter mixture and remove the garlic cloves. (You can smash one into the sauce if you like.)

When the pasta is done, reserve ½ cup of cooking water, drain in a colander, then transfer immediately to the bowl with the beaten eggs, tossing to combine; the heat of the pasta will cook the eggs.

Stir in the contents of the skillet and mix well, adding reserved pasta water as needed. Toss with the smoked salmon, herbs and lemon juice and zest.