When Garrison residents vote May 17 on a proposed $12.36 million school budget, they will decide whether to approve a tax increase that is four times higher than the district’s state-mandated cap and among the largest increases in New York by percentage, according to a review of state records.

With a proposed tax levy increase of 9.18 percent, Garrison will be one of 15 districts seeking to override its cap, about the same number among the state’s 731 districts that make the attempt each year. For Garrison, the cap for 2022-23 is 2.2 percent; to set it aside, the budget must pass with at least 60 percent of the vote.

The referendum raises important issues for a district that already spends about $42,000 per student, nearly double the state average. And the vote has implications for neighboring districts Haldane and Highland Falls-Fort Montgomery, where Garrison sends its high school students who attend public schools.

Sarah Tormey, president of the Garrison school board, said she fears that failure to pass the override will result in the loss of important, non-mandated programs. “We can cut art. We can cut band and environmental education. We can cut all of these things. But it doesn’t make us competitive with our neighboring districts.”

Many residents say they support the budget. “Without this override, our kids, our community, our school will suffer,” said Ned Rauch, president of the Garrison School PTA, speaking at the April 6 board meeting.

But others question the size of the proposed increase. “I’m voting ‘no’ to send a message,” said Linda Lomonaco, a longtime Garrison resident, who thinks the district spends too much on administration. “There is a whole set of the population that thinks this is ridiculous.”

In a letter to the editor of The Current, another resident, Lily Essely, wrote: “This is not a private academy and the community isn’t all rich. For some people on fixed incomes, $500 or $800 more a year [in increased taxes] is a lot of money.”

How did Garrison, which boasts the lowest taxes in Putnam County, find itself needing to raise so much more money to educate about 300 students next year?

The answer is a story of inflation, the formula-driven world of New York public-school finance, and the challenges of being a small, well-off, K-8 district with little control over large portions of its budget, especially the cost of sending its graduating middle school students to high school.

To understand the unusual nature of what Garrison is attempting, consider that over the past five years, 98 percent of budgets proposed by districts across the state have been at or below the cap, according to the Association of School Business Officials of New York. This will be Garrison’s first override vote since the cap was introduced 10 years ago; neither Haldane nor Beacon has sought one. Of 78 overrides proposed over the last five years, 67 percent were approved by voters, according to the ASBO.

The tax cap is often described as being 2 percent or the rate of inflation, whichever is lower. However, it is based on a complex formula and districts’ caps vary widely from less than zero to more than 5 percent. Most caps hover around 2 or 3 percent. Haldane’s cap for 2022-23 is 3.7 percent and Beacon’s is 3.9 percent.

Inflation is a major reason Garrison says it needs the override. With inflation at 8.5 percent in March, districts are being challenged as tax caps have pinned levies below the inflation rate, said Brian Cechniki, executive director of ASBO. “This is the first year where school districts have faced the cap and a high level of inflation.”

Below are 11 New York districts, including Garrison, that send their students to high schools elsewhere, along with their proposed 2022-23 tax levies and the percentage increase. Among this group, only Garrison is seeking an override. 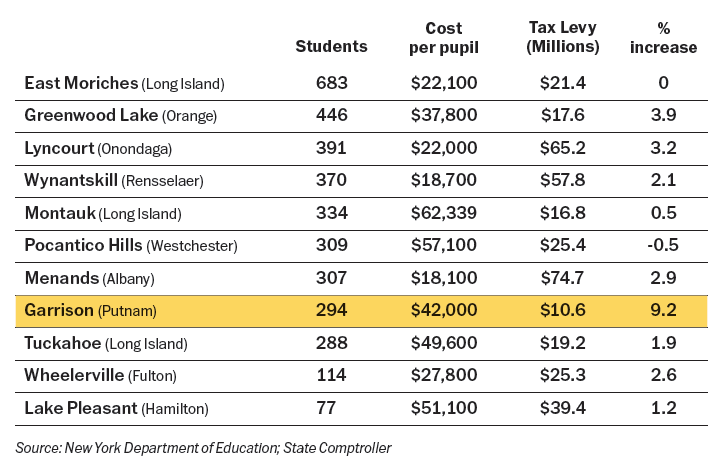 Large chunks of Garrison’s budget are being hit hard by inflation, including health care (up 14 percent) and transportation (up 12 percent), said Joseph Jimick, the district’s business administrator. Small districts like Garrison are more vulnerable to inflation because they have smaller reserves to absorb the impact, he said.

Garrison is also more exposed because of how much the district relies on property taxes rather than state and federal funding. On average, school districts statewide receive 58 percent of their revenue from local taxes, according to the ASBO. But it’s harder for wealthier districts to get state and federal aid, Cechniki noted.

By contrast, Beacon — considered by the state to be an “average need” district — gets 56 percent of its $78.6 million budget from property taxes and 38 percent from state aid, according to Deputy Superintendent Ann Marie Quartironi.

Garrison’s state aid this year was cut by nearly $100,000, although it did get a one-time injection of money last month after lobbying Albany. By contrast, Haldane’s aid rose by nearly $360,000, and Mahopac, Carmel, Putnam Valley and Brewster received a total of $2 million.

Another issue driving Garrison’s proposed increase is that it has lost control over the cost of sending students to high school, particularly Haldane.

One of the district’s selling points is that its eighth grade students can choose between Haldane and O’Neill High School in Highland Falls. “People move here because we have high school choice,” said Tormey.

The costs of sending students to O’Neill has remained stable, dropping slightly this year before an expected 5 percent increase to $16,980 per student for 2022-23.

Haldane has become costlier. Before this year, Garrison and Haldane had an agreement that stabilized what Garrison pays. After that agreement expired, Haldane began charging based on a state formula that increased prices by 54 percent over two years, to $21,473 per student in 2022-23.

Philip Benante, the superintendent for Haldane, said the increase is justified. “We feel that the program we offer has a particular value to it and that the state rate best reflects that value.” 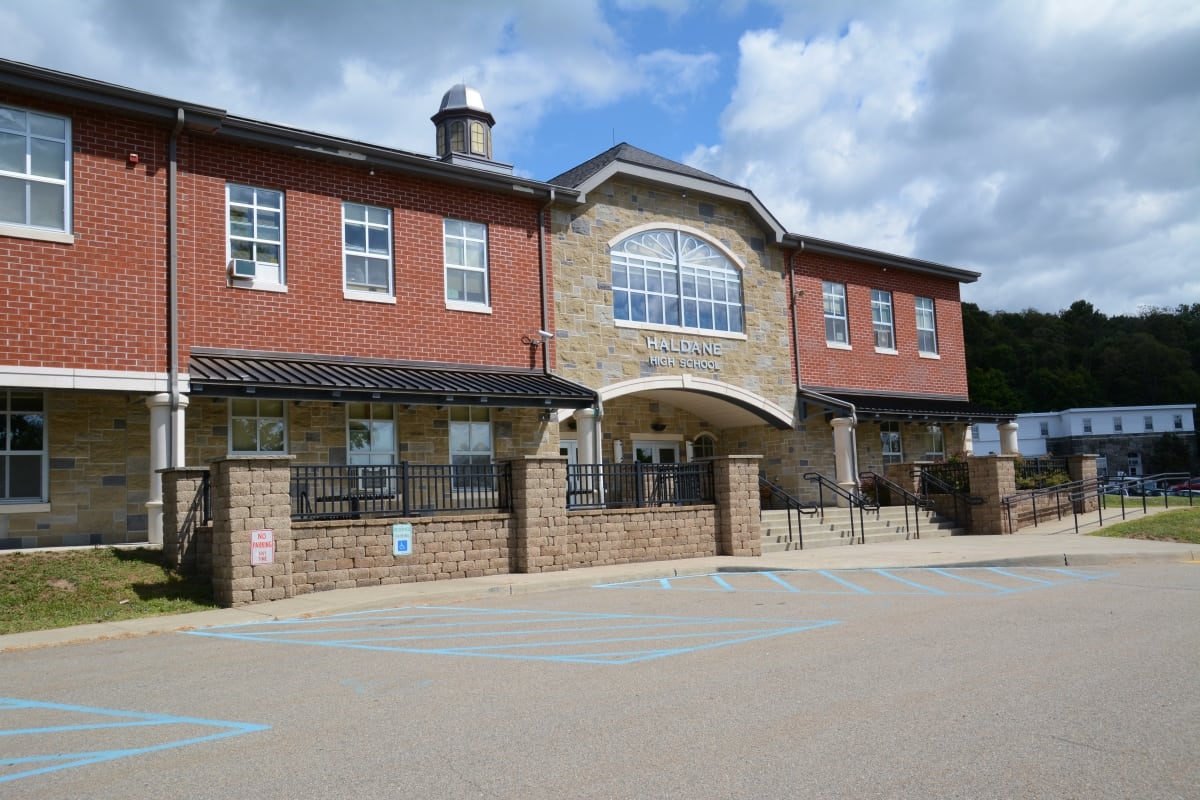 On the other hand, Benante said he is sympathetic to Garrison’s challenges and doesn’t want to lose its students. “We want to maintain a relationship with them.”

Albano said he would like an “agreement that controls costs and makes them predictable.” He said he has made progress in discussions with both O’Neill and Haldane but that none of the school boards has approved any agreements.

Garrison has added to the ballot a measure asking voters to permit the district to enter into a longer-term agreement with Highland Falls-Fort Montgomery.

Even if the override is approved on May 17, the Garrison tax levy will remain low relative to its neighbors and most districts statewide.

In terms of neighboring counties, Jimick points out that Garrison’s tax rate is the second-lowest of the 84 districts in Westchester, Putnam, Dutchess, Rockland and Orange counties. If the override is approved, Garrison would be the third-lowest behind Rye City and Pocantico Hills.

The fact that Garrison is able to raise so much per student and still have the lowest property taxes in the area is a consequence of having a wealthy tax base. “If the properties weren’t worth so much in Garrison, there would definitely be a higher rate,” said Jimick.

Albano points out that the high cost per pupil is driven in part by the district’s size. “The economies of scale make it expensive to run a small district,” he said. For example, the district must pay administrative costs as well as the costs of educating students with special needs. Larger districts absorb those costs more efficiently, he said.

Albano added that with such a small district he often hears discussions of whether it would make sense to combine with a larger district such as Haldane. “Could you merge?” he asked. “Absolutely. But the Garrison community probably wouldn’t want it because it would increase the taxes well beyond what we’re proposing.”

One thought on “Garrison One of 15 Districts Seeking Override”