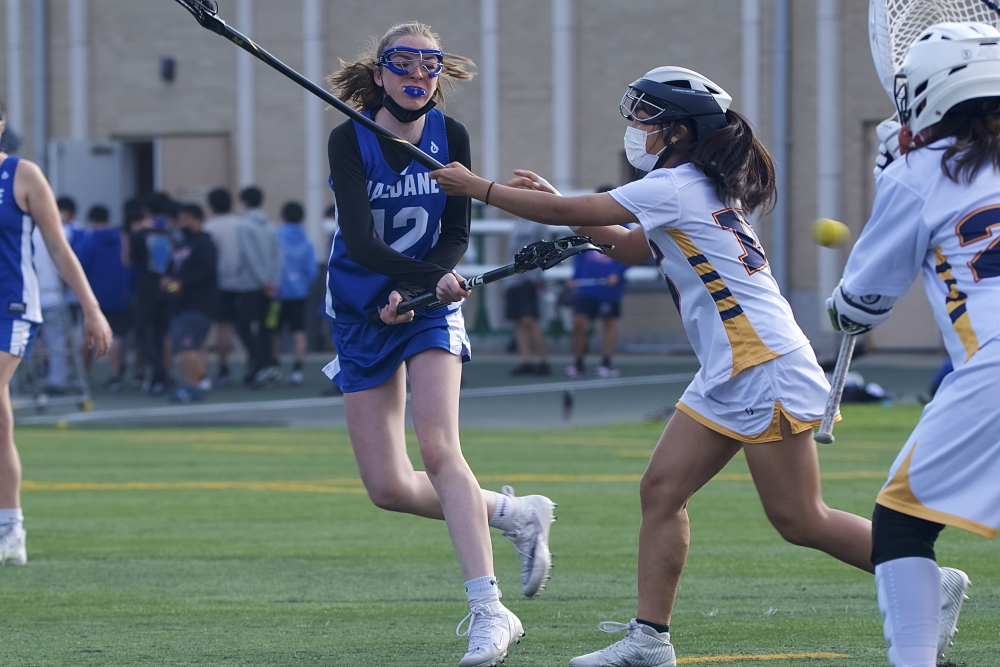 Mairead O'Hara puts a shot on net against Keio. (Photo by S. Pearlman)

The Haldane team — playing its first season as a varsity program — picked up three wins in the past week, collecting a pair of 5-4 victories over Blind Brook on April 29 and 30 and shutting out Keio Academy, 8-0, on Wednesday (May 4).

The Blue Devils’ victories followed an 11-9 loss at home on April 28 to Edgemont.

On Wednesday at Keio, Haldane controlled the draws and ground balls and dominated possession in building a 7-0 halftime lead over the winless Unicorns.

“Our goal was to perfect running some of our plays,” said Coach Keri Dempsey. “Our defense played great, our offense had a strong game, and our transition was working well.”

In the April 30 win at Blind Brook, Haldane got the game-winner with 1:52 remaining when O’Hara deposited an 8-meter shot. She finished with two goals and an assist, and Ruby Poses, Kayla Ruggiero and Johansen each had a goal. Mahoney recorded 13 saves. 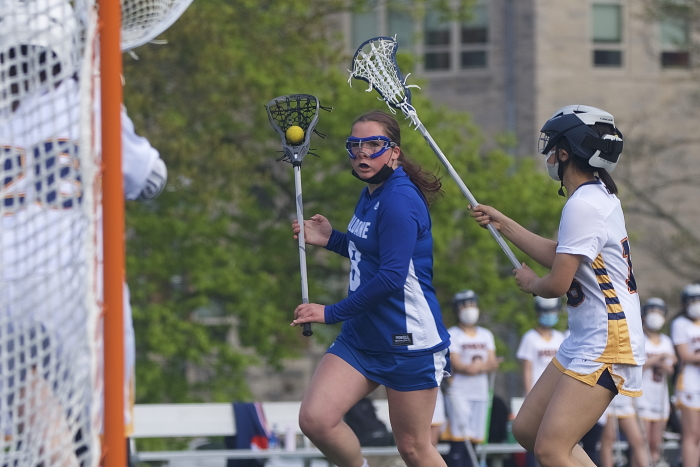 Marlena Slokenbergs has eyes on the goal in Wednesday’s win. (Photo by S. Pearlman)

A day earlier, hosting Blind Brook at Haldane, the Blue Devils went up 5-3 with 11 minutes to play, and held on for the victory. O’Hara had two goals and two assists; Johanson, Nicholls and Erin O’Hara each had a goal; and Ruggiero and Cofini each had an assist. Mahoney stopped eight shots.

“Lola has improved so much since the beginning of the season,” Dempsey said. “She’s been way more confident in the net. On defense, the girls have been looking sharp, and that’s been making a huge difference.” 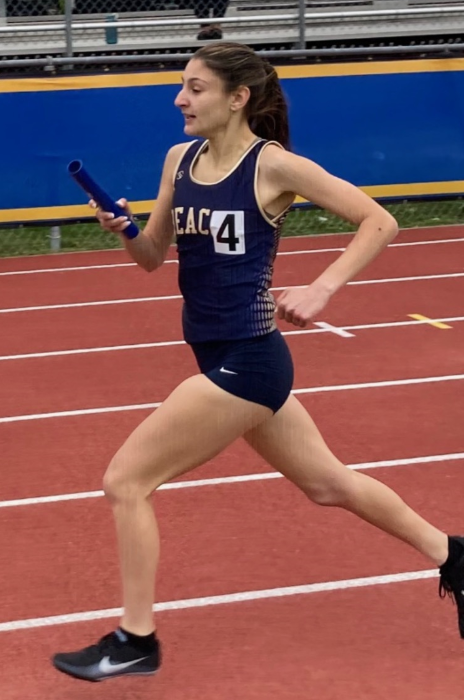 Bella Migliore won the 800 meters for Beacon at the Iron Duke invite at Marlboro. (Photo by Jim Henry)

Sophomores ruled the day for Beacon on April 29 at the Iron Duke invitational meet in Marlboro. Rubio Castagna won the 400 hurdles in 60.4, Bella Migliore took the 800 in 2:34, and Damani DeLoatch was first in the triple jump at 42-0.

On Wednesday (May 4), in a meet against Chester at Washingtonville, Beacon’s boys won, 98-29, and the girls were victorious, 62-51. The boys’ 4×100 relay team of Lucas Vermeulen, Jazziah Whitted, Jonah Mensch and Eddie Manente ran a season-best 44.8, and long jumps by Cody Shields (20-5) and DeLoatch (20-0) were both among the top 10 leaps this season in Section IX.

Beacon is scheduled to compete on Saturday (May 7) at the Oval Office Invitational at Franklin D. Roosevelt High School in Hyde Park.

Haldane participated in the 41-team Gold Rush meet at West Nyack on April 30, with Luke Parrella finishing fifth in the boys’ 3,000-meter steeplechase in 10:50.20 and Andriea Vasconcelos taking eighth in the girls’ triple jump at 29-08.50.

In a four-team tournament on April 30, Haldane defeated Palisades Prep, 16-3, but fell, 11-2, to Saunders, which had defeated Peekskill.

In the win over Palisades, Scott Bailey pitched an inning before John Kissinger came to the mound and got the win, fanning nine batters. On offense, Trajan McCarthy homered and drove in three runs, Hunter Erickson tripled and had an RBI, and Kisslinger had an RBI double.

In the second game, McCarthy, Julian Ambrose and Dan Nakabayashi combined on the mound.

“We got burned on a few balls that got by the outfielders on a field that had no fence,” said Coach Simon Dudar. “We just had some bad luck and ran out of gas on a hot day.”

A day earlier, Haldane picked up a 13-3 win at Yonkers Montessori Academy. Ryan Eng-Wong earned the decision with 10 strikeouts in five innings. McCarthy and Milo Pearsall each had two-run home runs, Ambrose had two RBI and a double, and Jeremy Hall had a pair of doubles.

The Blue Devils (4-6) were scheduled to host Croton-Harmon on Thursday and Putnam Valley today (May 6) at 5 p.m. before traveling to Tuckahoe on Saturday. Pawling comes to Cold Spring on Tuesday at 5 p.m.

Beacon fell to Port Jervis, 8-4, on April 29, but picked up a 7-1 victory over Port Jervis Tuesday (May 3) on the road, with Joey Vollaro striking out five and allowing only one hit for his second win of the season.

At the plate, Vollaro went 2-for-3 with a double and two RBI; Chase Green had two hits, including a double; Jackson Atwell went 2-for-4; Owen Bozsik drove in two runs; and Ronnie Anzovino had an RBI.

The Bulldogs (5-6) was scheduled to play Thursday against Lourdes at Dutchess Stadium and to honor their seniors. The team travels to Newburgh Free Academy today (May 6) and Valley Central on Monday before hosting Washingtonville on Tuesday at 4:15 p.m.

Beacon dropped a 7-4 decision at Wallkill on Tuesday (May 3), with Bella White taking the loss in the circle for the Bulldogs (4-9). Olivia Spiak had two RBI and went 3-for-4, and Olivia Ciancanelli went 2-for-3 with a double and two RBI.

“The girls played a fantastic game up to the fifth inning, with Bella pitching great, and some solid defense backing her up,” said Coach Michael Carofano. “In the fifth we didn’t play our best ball, and they took the lead, which we were not able to overcome. But overall, our girls have been playing much better than we were a few weeks ago, and we will continue to develop.”

On April 30 at home, Mikayla Sheehan smacked a two-out single in the bottom of the seventh, scoring Christina Merola, to give Beacon an 8-7, walk-off win over Wallkill.

White got the win in the circle, in relief of starter Sheehan. Spiak and Ciancanelli each went 3-for-4 with doubles, and Haleigh Zukowski had an RBI.

“I was so proud of our girls for their mental toughness, coming back when facing adversity,” Carofano said. “It was one of our better days at the plate, and Bella came on in relief with the bases loaded in the seventh and didn’t allow a run. She also had two clutch bunts.”

The Bulldogs are scheduled to travel to Washingtonville on Tuesday (May 10) and Monticello on Wednesday.

The Bulldogs (4-5) were scheduled to visit Port Jervis and Middletown this week. They travel to Burke Catholic on Monday (May 9) before starting regional tournament play.