Alarmed by campaign signs proclaiming “Christ is King” and exhorting voters to “Trust in God,” a Beacon business owner and a Fishkill mother of seven have mobilized to oppose a slate of Wappingers Falls school board candidates.

There are eight candidates for three seats on the nine-member board, which found itself under a spotlight in March when it voted to remove Gender Queer: A Memoir from the library at John Jay High School. The election is May 17; the winners will serve three-year terms.

The three incumbents, Keri Cahill, Marie Johnson and Eddy Sloshower, are running for re-election. The Dutchess County chapter of Moms for Liberty, a national organization at the forefront of a movement to remove books from public high schools, has endorsed Cahill; Virgil Capollari, a retired U.S. Air Force special agent; and Dan Pena, a Westchester Community College instructor.

Their campaigns, as well as that of Anthony Ciro DiLullo, who has included Christian slogans on his yard signs, emphasize their support for “parents’ rights.” Capollari adds that he wants “no political influence (or ‘indoctrination’) in the classroom” and Pena says he supports “transparency in the development of both curriculum and policies affecting education.” 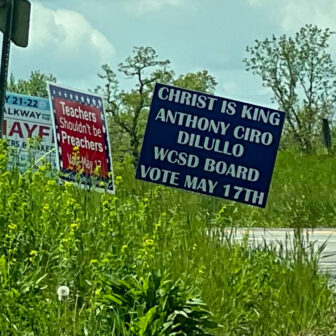 Campaign signs on the corner of Route 9D and Little Schoolhouse Road in Wappingers Falls (Photo by B. Cronin)

DiLullo, who describes himself as “a God-fearing, America-loving patriot” says he wants to see a shift away from “emotional learning” because “what’s happening today to the students is both a tragedy and a crime.”

“I believe parents should retain control over their children,” he wrote on a Meet the Candidates page of the school district website. “Teaching the Constitution for the United States is also of paramount importance. Students should know their rights secured by the Constitution.”

Sarah Hanganu, listed on the Moms for Liberty site as the contact for its Dutchess chapter, did not respond to an email asking for clarification about how the group defines “parents’ rights” or the reasons behind its endorsements. The national website says that Moms for Liberty “is dedicated to fighting for the survival of America by unifying, educating and empowering parents to defend their parental rights at all levels of government” around issues such as gender identity, antiracism training, sex education and critical race theory, a view of Black history that is taught at the college level.

Laura Leigh Abby, who owns the Main Street Studio @ Beacon with her wife, Samantha, and lives in the Wappingers district, says she was alarmed by DiLullo’s campaign signs because they mix public education with religion and might “set a precedent.”

(The state does not prohibit candidates from using religious messages in campaigns, said Jay Worona, deputy executive director and general counsel for the New York State School Boards Association. However, if elected, “they would not have the ability to speak on behalf of the board if their message is to promote religion,” he said.)

In addition, Abby argues that phrases such as “parents’ rights” and charges of “political influence” by teachers are code for far-right campaigns to censor books and ideas in the classroom. In response, she and Karen Finnegan, a Fishkill parent, in April launched Defense of Democracy NY, a grassroots organization that opposes what the women describe as “far-right, extremist groups like Moms of Liberty that use political agendas to undermine our children’s right to a free and fair education.”

Finnegan has seven teenage children — three straight, two gay and two nonbinary. Two attend school in the district, and Finnegan said the challenges to books with LGBTQ themes, and the rhetoric of the school board campaign, have made her feel they have “a target on their backs.”

She and Abby raised $1,000 to print “Teachers Shouldn’t Be Preachers” signs to counter DiLullo and endorsed Johnson, Sloshower and Cheryl Migatz, an English instructor at Dutchess Community College, for the board. The three candidates also have the support of the Wappingers teachers’ union.

The eighth candidate, Ariana Dingman, owns a graphic design business and has said she supports “honest education in these challenging times.”

Howard Rissin, who has two children in the Wappingers district, said he supports the pushback. “It doesn’t resonate with me to play into fear and narrow the field of education,” he said. The district’s focus “should be enriching students and expanding their minds, not to be an echo chamber for a political agenda.”

2 thoughts on “Calls for ‘Parents’ Rights’ in Nearby School Election”