The Cold Spring Village Board ordered pound master Theodore Morrison to keep all animals and domestic fowl off the sidewalks. “It may be a matter of taste, but the majority of our people do not want, nor will they have, goats and pigs sharing the walks with their wives and children,” observed the editor of The Cold Spring Recorder. “If the odor of the barnyard and pigsty is inoffensive to some, let them enjoy the same at home.” 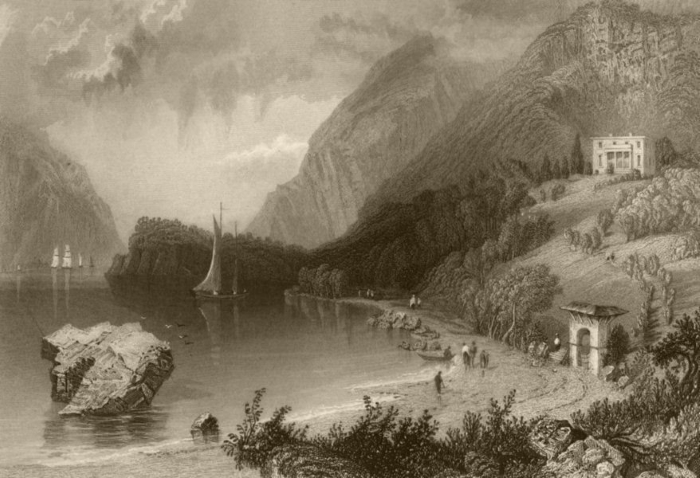 Undercliff, the home of George Morris, in a painting made about 1840

The state distributed its annual grants for teacher pay, including to Philipstown’s 15 school districts.

Irving McCoy, the editor of The Cold Spring Recorder, offered this observation: “Shall the man take the woman’s name at marriage? The indications are that we are going in that direction. Here is an actual case: A man whom we shall describe as Mr. Smith took to wife in the city the other day a young woman whom we shall describe as Miss Brown. Soon after, his friends were astonished to find his cards read, ‘Mr. Brown-Smith.’ What can be dearer to a man than his name? If he is willing to barter that for domestic peace, his soul is no longer his own.”

As required by state law, the store owner who served as town clerk posted a bulletin board for announcements in front of his establishment with the words, “Philipstown. Town Clerk’s Office” painted on it.

A benefactor from West Point joined with E.L. Hallock, director of the Cold Spring Concert Orchestra, to purchase a German-made double bass. 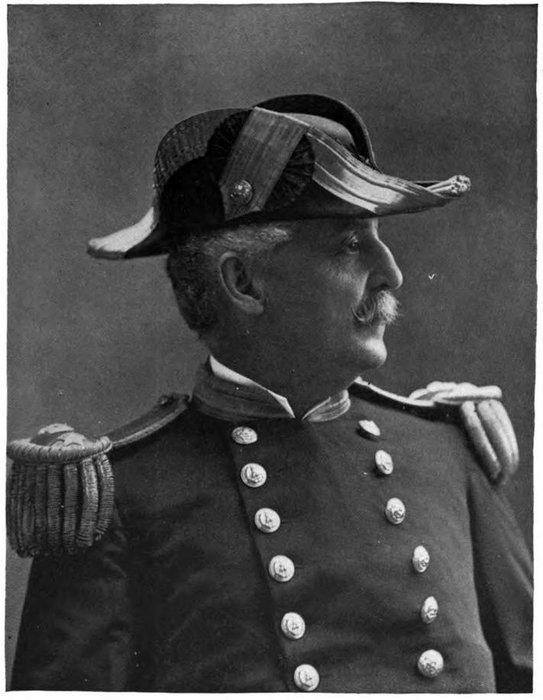 R.W. Meade, a retired admiral, died in Washington, D.C., following an operation for appendicitis. The Navy officer had been stationed at one time in Cold Spring as inspector of ordinance at the West Point Foundry.

The body of an unknown man was found on the railroad tracks south of the Garrison tunnel. The only thing in his pockets was a pair of brass knuckles.

The King Granite Co. of Garrison shipped two boatloads of paving bricks to New York City and a boatload of stone to Florida.

A windmill erected at Rocklawn, the Garrison estate of Hon. Hamilton Fish, was destroyed during a windstorm.

The Hudson River Telephone Co. said it would supply all its offices with an asbestos blanket and a pile of sand for fire emergencies.

The editor of The Recorder lamented the peculiarities of a political system in which a senator from Nevada who represented only 45,000 people could shape tariff legislation that affected 70 million other Americans.

The Cold Spring Hose Co. No. 1 held its inaugural annual meeting. It recounted the fire alarms it had received, on Aug. 13 (at the foundry and machine works on West Street), Dec. 11 (at the home of William Woods on Kemble Avenue) and Feb. 2 (aboard the schooner Mary Emma docked at the foot of Market Street).

A group of young people met at the Presbyterian Church to organize the Parsonage Lawn Tennis Club, adopting the motto, “A good time for all.”

Herman Fink, formerly of Continentalville, secured a job with his father-in-law in the soda water business.

Clarence Sara, a Cold Spring bicyclist, was injured near Wappingers Falls when a chicken crossing the road caused him to crash. Although he broke his collarbone, Sara rode to New Hamburg, where he took the train home.

The Recorder noted that hardly a night went by that the steamer Adirondack was not saluted by fireworks and shouts from shore as it traveled up the river. The captain would respond from the “magnificent Roman palace” with a whistle and the flashing of its 24-inch search light against the banks. 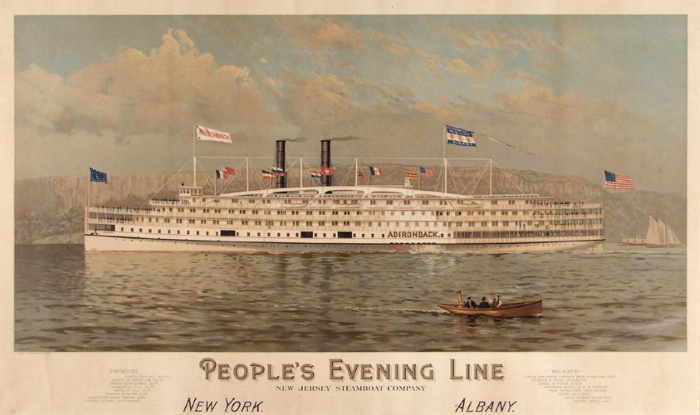 An 1895 advertisement for the steamship Adirondack

Gov. Frank Black signed a bill introduced in the state Assembly by Emerson Addis, who represented Putnam County, that banned the scalping of railroad or steamboat tickets.

The Haldane Debating Club posed the questions, “Resolved, that railroads should give cyclists special rates” and “Resolved, that every voter under the age of 30 years should be able to read and write.”

The Recorder reported that nearly all the farmers in North Highlands had finished planting, and that Alson Mosher already had corn up.

Richard Austin of Garrison suffered a serious laceration on his cheek when he was bitten by a horse. 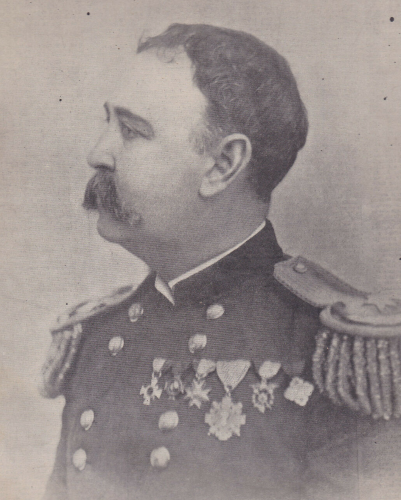 Brig. Gen. Louis Fitzgerald, who lived at Eagle’s Nest on the Garrison road, announced his retirement as commander of the First Brigade of the National Guard. He had been in the service for 40 years.

Robert Barrett of North Highlands reported he had sawed nearly 1,300 feet of plank from a single yellow oak.

The Cold Spring Village Board instructed the street commissioner to remind Main Street merchants they could not use the sidewalk to store boxes and barrels.

The Recorder shared this quip: “A Joplin, Missouri, paper states that a woman preacher at that place stopped in the middle of a discourse and, picking up a Bible, said she was going to throw it at a man who was unfaithful to his wife. Thirty-seven men immediately ducked.”

At a gathering of 2,500 Sunday School students from 150 Episcopal churches at the Cathedral of St. John in the Divine in New York City, a delegation from St. Mary’s in Cold Spring was honored for achieving the highest percentage increase over its 1921 offering, at 280 percent.

Edward Bullock of Cold Spring filed for federal bankruptcy protection, saying he was $291,163 in debt [about $5 million today]. Bullock had been president of the Katzenbach & Bullock Co., a New Jersey company that made chemicals and dyestuffs for the military. His attorney said the firm went bust with the signing of the armistice, and that Bullock was working as a clerk.

Harry Cox of Cold Spring was elected commander of the Putnam County Veterans of Foreign Wars.

A post office opened in Putnam Valley and Garrett Cochrane, a World War II veteran, was appointed postmaster. Putnam Valley had a post office around the turn of the century but the mail had since been delivered from Peekskill.

Thomas Healey, 80, was found dead in the “tramp room” at the county jail, where he had sought lodging.

About 100 people filled the Municipal Building in Nelsonville to hear the Village Board discuss a proposed zoning ordinance.

The Zeta Eta Sorority named Dorothea Pinkel as its inaugural Lady of the Year for Philipstown. A retired kindergarten teacher, Pinkel was a member of the Highland Garden Club, Putnam County Historical Society, Constitution Island Association, Philipstown O.E.S., Philipstown Chorale, Haldane PTA and Community Bible School, and helped with the British War Relief and World War II Rationing Board. She also assisted with cancer research and Red Cross drives, gave blood, and served on the Girl Scout Committee. In addition, she was the first woman to serve on the vestry at St. Mary’s Episcopal Church, where she had been a member of the Altar Guild for 47 years and taught Sunday school for 34 years.

Wayne Stellefson set a Haldane record in the discus with a throw of 143 feet and 10 inches. He had set the previous mark the week before.

St. Basil’s Academy in Garrison held a memorial service for George Spyropoulos, who left $500,000 to the school to build a children’s center.

After Garrison school district voters, in a record turnout, rejected a proposed $4.49 million budget, 318-290, the school board voted to hold another vote with no changes. In another record turnout, the budget again was defeated, 389-290.

A member of a paving crew working at the Maple Lawn Garden Center on Route 9 in Garrison was seriously injured when he was run over by the small bucket loader. His supervisor, who was driving, said he yelled for the teenager to get out of the way but he must not have heard.

Mario Buatta, who billed himself as the “Prince of Chintz,” spoke at a Putnam County Historical Society gala about a style he called “the undecorated look” that mixed contemporary and antique furnishings.

Malachy Cleary, speaking for members of a standing-room-only crowd, asked the Cold Spring Village Board to address rumors that the Tiny Tots play equipment at McConville Park on High Street would be moved to Mayor’s Park. Mayor Anthony Phillips said the move was being considered because of two large dead trees, a lack of insurance and complaints from neighbors about noise and congestion. The group asked for permission to post a laminated sign asking that children not be allowed to relieve themselves on the trees and shrubs.

Joann Sherman, the daughter of Mr. and Mrs. William Flaherty of Cold Spring, won Emmy Awards for technical ability and graphic design for NBC’s coverage of the 1996 Olympic Games. She had received her first Emmy two years earlier for outstanding individual achievement in news and documentaries.

A Garrison woman who said her accelerator had stuck plowed her vehicle through the front windows of the Butterfield Pharmacy.

The chair of the Putnam Legislature’s Rules & Enactment Committee suggested that County Executive Robert Bondi had committed an ethics violation when his photo appeared in an advertisement in a publication distributed by the New York State Association of Counties endorsing a company that sold software to Putnam County. Bondi said he had not been paid to appear in the ad, in which he said he was happy with the firm’s service.