Electricity provider may want out of contract

The company that administers a program under which Beacon, Cold Spring and Philipstown buy electricity at a fixed cost for residents claims that the Brooklyn firm contracted to supply that energy wants to shift customers back to Central Hudson.

In an April 26 filing with the state Public Service Commission, Joule Assets alleges that Columbia Utilities has notified the agency that it wants to terminate its agreement to supply electricity for Hudson Valley Community Power. However, the copy of the notice released to Joule is completely redacted, except for the Columbia Utilities letterhead, making it impossible to confirm what it says. 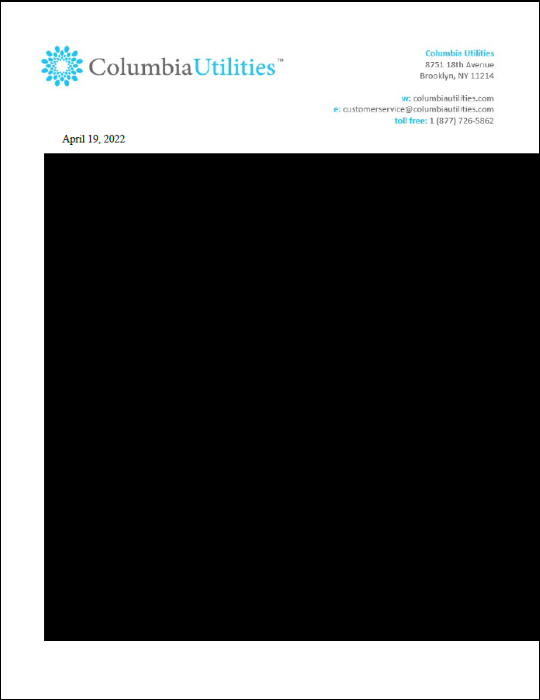 The redacted report received by Joule

The energy program is a consortium of Beacon, Cold Spring, Philipstown and seven other municipalities that agreed last year to purchase electricity from renewable sources at 6.6 cents per kilowatt-hour for residents and 7.1 cents for small businesses through June 30, 2024. It was expected the program would save residents money if costs rose and also protect them from the uncertainty of price swings.

According to Joule, the agreement saved about 25,000 residents in the 10 municipalities $5.7 million through the first three months of 2022. While they were paying 6.6 cents per kilowatt, the price charged by Central Hudson rose to more than 20 cents per kilowatt-hour in February before dropping to 6 cents as of Wednesday (May 11).

Chris White, Beacon’s administrator, said the city is in regular communication with Joule and “we fully support Joule’s efforts to ensure Columbia Utilities honors its contractual obligations, including to Beacon customers.”

Jason Angell, who before winning a seat on Philipstown’s Town Board was part of a team that helped put together Hudson Valley Community Power, said he is angry.

“You shake hands, you make a contract, that contract is good,” said Angell. “You don’t get to just back out of it all of a sudden midway through because it’s a good deal for one side.”

In its filing with the Public Service Commission, which regulates utilities, Joule said it received a letter from Columbia Utilities on Feb. 8 alleging that Central Hudson’s well-documented billing problems were “negatively impacting” Columbia’s efforts to provide service. The company “raised the possibility” of suspending service until the billing problems were resolved, and asserted in a follow-up on March 4 that it had grounds to terminate the agreement, according to Joule.

Central Hudson’s billing issues are the subject of a state investigation, but, according to Joule, “upon information and belief, based on discussions with Central Hudson,” they have been resolved.

In addition to asking the Public Service Commission to reject any attempt to end the agreement, Joule is calling for the agency to reveal the contents of the April 19 notice it received from Columbia.

The notice was redacted at Columbia’s request. The firm said it contains trade secrets and confidential information that, if disclosed, “would likely cause substantial injury to the positions of Columbia.”

Christina Costa, the regulatory affairs manager at Columbia who made the request to the PSC to censor the document, did not respond to an email with questions about its agreement with Hudson Valley Community Power.

Stephen Filler, Joule’s general counsel and senior vice president, called the redaction an attempt to “to hide an apparent breach of Columbia’s contractual obligations,” adding that “there is no explanation how Columbia would be harmed” by disclosure.

One thought on “Power Pact Threatened”