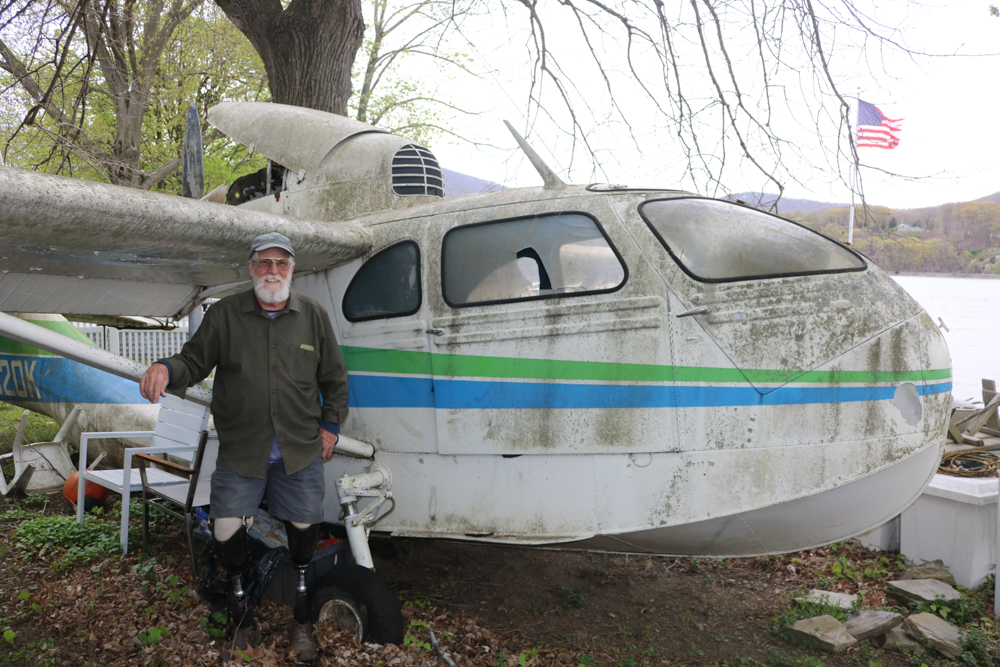 Brennan with the seaplane he crashed into the Hudson River. (Photos by M. Turton)

At many points in his 75 years, Jay Brennan, who lives in Manitou, in south Philipstown, would have benefited from having a stunt double.

How many people have crash landed a plane in the Hudson River; ridden across the U.S. on a motorcycle (twice); repeatedly flown in the world’s largest air transport; sailed across the Atlantic and back (twice); lost a leg in a motorcycle accident (twice); distributed medical supplies in a country blacklisted by the U.S. government; helped students evade their principal by hiding them in the basement of a pizza shop; repeatedly explored the Mediterranean Sea in a sailboat named Barleycorn and been the inspiration for the protagonist in a bestselling novel?

“It’s been an adventure,” says his wife of 30 years, Aetna. “I never stopped to think what it would be like to marry someone who is larger than life.” 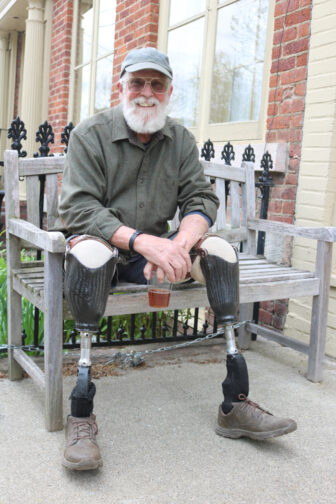 Brennan’s love of flying dates to the mid-1960s, when he was working for a Westchester company that produced the ground-speed indicators for the C5A military transport, the world’s largest plane at the time. Recalling that job, he smiles. He flew in the plane once a week.

In 1967, while he was riding his Triumph Bonneville near Peoria, Illinois, an approaching driver took a corner too fast. “And I was going too fast,” Brennan recalled. “They sideswiped me, sheering my left leg,” which had to be amputated.

In 1969, he bought what became Jay’s Deli and Pizza in Peekskill, operating it for 10 years. With a high school next door, business was guaranteed. He became popular with the students, and not just for his pizza. When the principal would come looking for truants, Brennan let them hide in the basement.

Having a prosthetic leg didn’t deter him from riding his motorcycle to San Diego and back in 1977. He and his girlfriend spent 10 hours there before heading back east. He did an encore a couple of years later, with a different girlfriend.

In the early 1980s, Brennan worked at the Peekskill Seaplane Base. When he saw a “for sale” sign on a 1946 Seabee, he couldn’t resist. Later, when the business closed, he bought five more. “I thought I might need parts,” he says.

Brennan routinely flew the planes for a couple of hours a day. Nantucket and Martha’s Vineyard were favorite destinations. “I met Ted Kennedy at the Vineyard,” he said, adding they hit it off, in part because Kennedy’s son had a prosthesis.

In 1982, he was riding his Honda Gold Wing on Route 9 in Philipstown, shortly after returning from a bike trip to Mardi Gras. “I don’t remember what happened, but I crashed over the guardrail,” Brennan says.

His leg was severed. “They put it in a bag, took it to the Bird & Bottle Inn and filled the bag with ice,” he says. He was flown to Montefiore Hospital but there was no saving the leg. 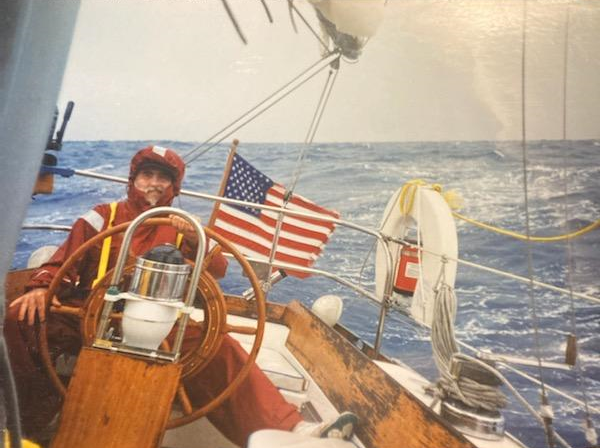 Even with two prosthetic legs, Brennan kept flying, using the Hudson River as his airstrip. In May 1985, he took off from Cold Spring with his son, Greg, and Greg’s girlfriend aboard and was making a wide turn over Cornwall when the engine blew a cylinder.

“My son had flown a bit, so I had him keep an eye on the water as we descended,” Brennan says. “I just focused on the instruments.”

They crashed in the river near Bannerman’s Island. “The tail section hit part of the island,” he recalls. “There was some adrenaline, for sure!” No one was injured, and a boat captain from West Point towed the plane to shore.

Today, the plane sits on Brennan’s front lawn; his five other Seabees are stored nearby.

In 1987, T.C. Boyle, who grew up in Peekskill with Brennan as a neighbor, published his novel World’s End, which won the PEN/Faulkner Award for American Literature. The protagonist, Walter Van Brunt, is based on Brennan. Asked if Boyle had accurately depicted him, Brennan says: “I’m less cranky than Walter.”

Brennan doesn’t say which passion runs deepest in his veins — biking, flying or sailing. But for longevity, and future pursuits, wind power seems to prevail.

He bought his first sailboat, the 23-foot Keoka, in the early 1970s, often sailing to Newport, Rhode Island. The sailing was good and usually calm, he says, though a few times the seas became rough enough that he sent his young children below.

Brennan first sailed to Bermuda in 1995, and two years later, made the first of two roundtrip Atlantic crossings, at the helm of his accountant’s boat.

His most exotic water-based venture came in 1999, when he sailed to Cuba. Coming into port, he was asked if he and his passengers wanted their passports stamped. “No, we’re not supposed to be here!” Brennan says he replied.

The U.S. government may not have wanted them there, but Brennan and his friends received a warm welcome. They brought with them $100,000 in medical supplies, which they distributed to Cuban hospitals.

“Going into Havana was an adventure,” Brennan recalls. “We met so many nice people, including many doctors” — noting that doctors were paid less in Cuba than bartenders.

In June 2001, he again sailed to Bermuda, this time with Greg. They ran into the tail of Hurricane Alison. “It got so rough that when Greg was on the bow he could look down and see the keel,” Brennan says.

Throughout 2014, Brennan and his wife explored the Mediterranean Sea, from Spain, France, Italy and the islands off north Africa to Greece, Corsica, Sardinia, Croatia and Turkey.

“Jay had to get a Croatian captain’s license,” Aetna recalls. “The following year we were almost jailed in Dubrovnik because Jay didn’t have the papers.”

Brennan now keeps the Barleycorn at a port in Turkey.

He thinks his mother may have fueled his need for adventure. “She wanted to sell the family house and move onto a houseboat,” he said. “That really surprised me.”

He still has items on his bucket list but concedes it may be too late to get back into flying, “though I’d like to — and to have another motorcycle.”

For now, he says, he’s thinking of starting a parasailing club that would meet at his house — “you know, stay with something aeronautical, and still have the ability to crash.”

3 thoughts on “Something You Don’t Know About Me: Jay Brennan”