Haldane dropped a pair of 11-1 decisions — losing Tuesday (May 10) at Pawling and Wednesday at home against Putnam Valley — to close out its regular season.

The Blue Devils (4-12) are expecting to open the Section I, Class C tournament on Monday (May 16) with a best-of-three series at either Tuckahoe or Leffell. 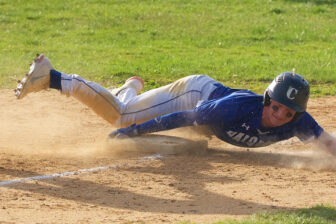 Jeremy Hall hangs on while sliding into third against Putnam Valley. (Photo by S. Pearlman)

At Pawling, Jake Hotaling took the loss on the mound. John Kisslinger had an RBI, and Jeremy Hall went 2-for-3 with a double and a run. Dan Nakabayashi and Hunter Erickson each had hits.

Against Putnam Valley, Julian Ambrose went two innings on the mound before being relieved by Nakabayashi. At the plate, Hotaling had an RBI double for Haldane, which fell into an 8-0 hole in the first inning.

“Our goal all season has been to cut down on [giving up] walks, and we threw strikes and accomplished that, but Putnam Valley was hitting well,” said Coach Simon Dudar. 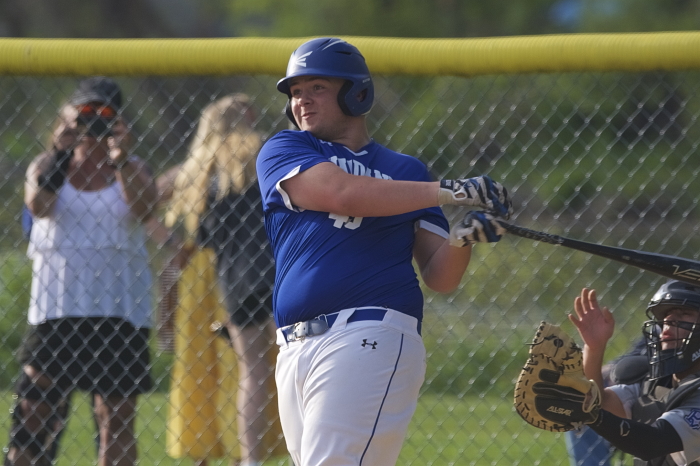 Junior outfielder Matt Junjulus, the team captain, conceded that while Haldane’s record “is a little rough,” the team has improved over last season. “We’re putting the ball in play, and our defense has been looking good, and so has our pitching,” he said. “We’ve had some good games against good teams. We’d like to pull an upset, win those two games and keep going.”

Beacon won its fourth straight game on Wednesday, over Washingtonville, 10-2, behind reliever Mikey Fontaine, who struck out seven batters in 6.1 innings.

Fontaine, Joey Vollaro, Liam Murphy, Derrick Heaton, Jackson Atwell and Jack Antalek each had an RBI for the Bulldogs (8-6). 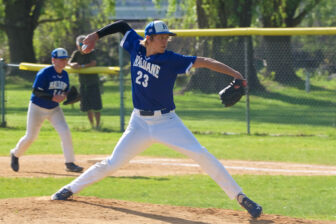 On Monday at Valley Central, Atwell singled in Heaton in the eighth inning for an 11-10 victory.

Heaton earned the victory on the mound with 4.1 innings of relief, striking out a batter with the tying run on base. The offense was led by Vollaro, who went 3-for-4 with a pair of RBI; Chase Green was 2-for-5; Tyler Haydt went 3-for-5 with three RBI; Murphy was 2-for-3 with two doubles; Atwell was 3-for-4 with two RBI; and Antalek had a pinch-hit RBI double.

Beacon beat Lourdes, 7-3, on May 5 at home on Senior Night, with Owen Browne pitching a complete game, scattering six hits and striking out two in a 7-3 victory. Vollaro drove in two runs; Green had a two-run double; Haydt was 2-for-4 with two RBI; and Owen Bozsik had an RBI triple.

Beacon traveled to the Race at the Oval Office at Roosevelt High School in Hyde Park on Saturday (May 7), with Damani DeLoatch winning both the varsity triple jump and the freshman/sophomore long jump.

The Bulldogs were scheduled to compete in the Loucks Games in White Plains on Thursday (May 12) before hosting Monticello on Wednesday (May 18), followed by the regional championships.

Beacon dropped a 5-3 decision Tuesday at Washingtonville, with Olivia Ciancanelli taking the loss in the circle. Lianna Rinaldi went 3-for-3 with a double and an RBI; Olivia Spiak was 2-for-2; and Mikayla Sheehan was 2-for-3.

“We had a decent defensive effort, and good pitching by Ciancanelli,” said Coach Michael Carofano. “But we struggled to string hits together, and we left too many runners on base.”

Beacon fell 7-2 to Newburgh Free Academy on May 5, with Ciancanelli taking the decision. Bella White pitched in relief. Haleigh Zukowski went 2-for-3 with an RBI for Beacon (4-11). “After the second inning we played great defense, backing up Bella in the circle, which kept us in the game,” Carofano said.

Haldane picked up a 14-10 victory over Lourdes in Poughkeepsie on Wednesday (May 11) to close its regular season. Evan Giachinta and Liam Gaugler each had four goals and four assists; Rowen Kuzminski and Frankie DiGiglio each had two goals; and Jesse Hagan and Ryan Van Tassel each had one. Jordon Hankel had 12 saves in goal.

On Monday at Putnam Valley, the Blue Devils fell, 13-9, with Giachinta scoring a hat-trick. Will Sniffen, Brody Corless and Rhys Robbins each had a goal, and Hankel stopped 15 shots.

Haldane lost at Chenengo Forks, 19-7, on May 7, with Giachinta and DiGiglio each scoring twice. Haldane also lost, 14-2, at Arlington on May 5.

“We played some tough competition to close out the season,” said Coach Ed Crowe. “Chenango is No. 3 [in the state] in Class B, and Putnam Valley had eight wins to close out its season. Lourdes also battled well, but I wouldn’t do it any differently.”

Haldane is expected to open the Section I, Class D playoffs on Tuesday (May 17) on the road.

Croton topped Haldane at home on May 5, 13-4, with Mairead O’Hara and Amanda Johanson each scoring twice. Helen Nicholls and Caroline Nelson each recorded an assist, and Lola Mahoney had 11 saves, including her 100th of the season. 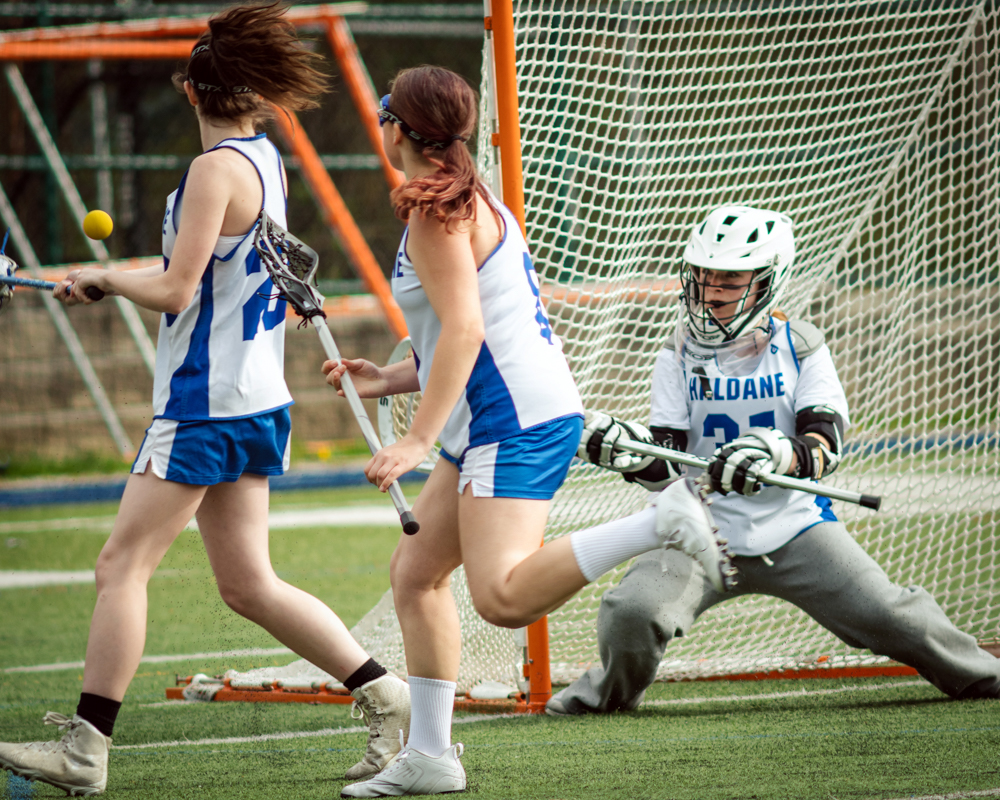 Lola Mahoney, the goalie for the inaugural Haldane varsity girls’ lacrosse team, protects the net during a game on April 29 against Putnam Valley. Six days later, against Croton-Harmon, the sophomore recorded her 100th save of the season. (Photo by Amy Kubik)

On Saturday (May 7) at Briarcliff, Haldane took a 14-6 loss, with O’Hara leading the team with four goals. Nelson and Kayla Ruggiero each had a goal, and Mahoney had 12 saves.

Haldane lost to Arlington, 18-8, on Monday, with O’Hara and Johanson each notching a hat-trick. O’Hara also had three assists, and Nelson and Ruggiero each had a goal. Ellen O’Hara had an assist, and Mahoney had 11 saves.

Beacon came up with a 12-10 win Monday over Roosevelt, with Kailey Mesorana and Anaya Camacho each scoring a hat-trick, and Gabby Kuka and Bethany Rudolph each adding two goals. Alex Faiella and Olivia Del Castillo scored one apiece for the Bulldogs, and Josalyn Pagan had eight saves in net.

Beacon dropped an 11-7 decision on Wednesday to Highland, with Camacho notching a hat-trick. Rudolph, Mesorana, Del Castillo and Kuka each had a goal.

The Beacon boys have won three of their last four matches, topping Minisink (7-0), Valley Central (5-2) and Goshen (4-3). The team fell 6-1 to undefeated Cornwall.

“Our young players are starting to emerge,” said Coach David Ryley. “It’s great to see them coming together and playing their best tennis at the end of the season.”