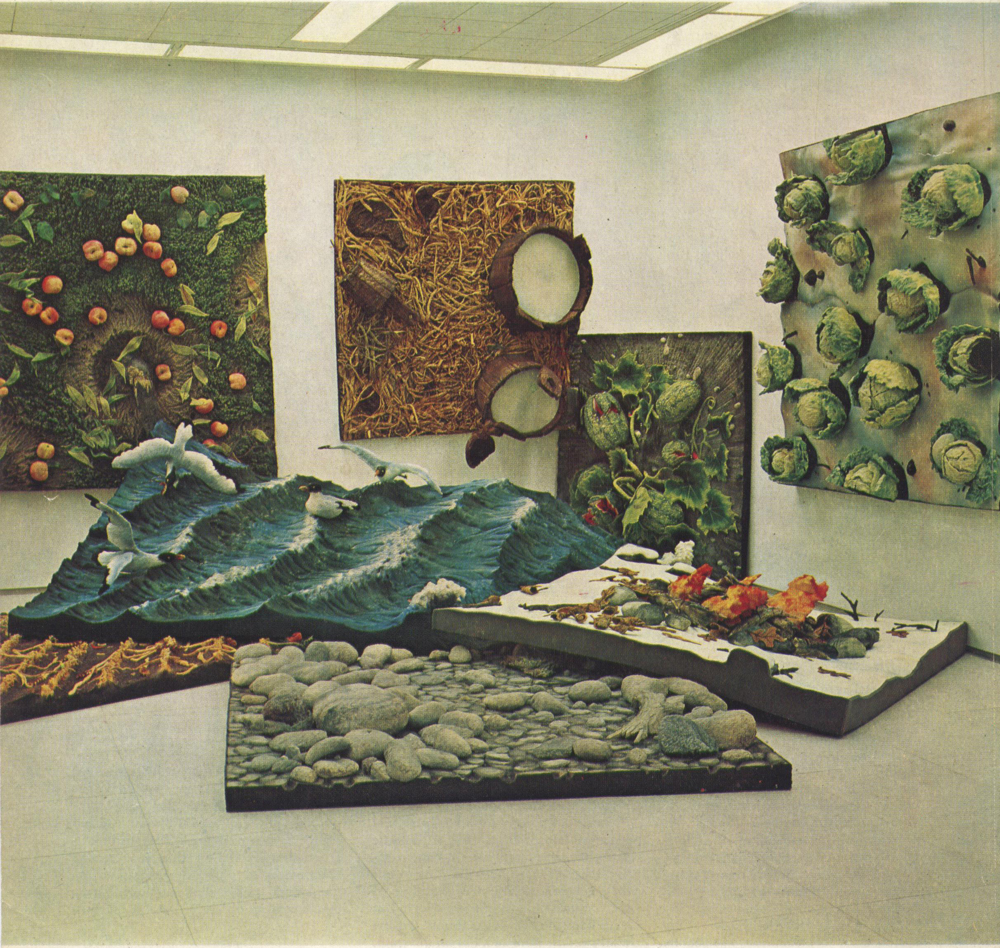 An exhibit of nature carpets in Paris, 1967

“I’ll have 8 yards of art, please — one section to wear, the other to decorate my home.”

Farfetched? Perhaps, but not if you had made it during the 1960s in the Turin studio of Piero Gilardi. The Italian artist was experimenting with materials and sculptural forms and, with an interest in the dynamic between humans and the environment, he would have been happy to fill the order. 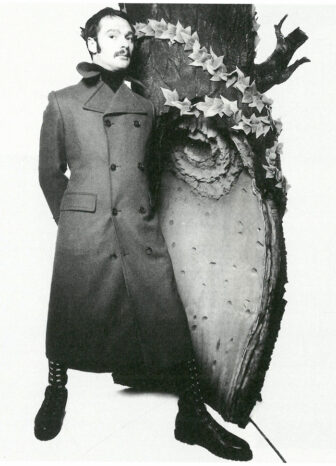 Piero Gilardi in 1966, in a photo taken for L’Uomo Vogue

Gilardi’s work is being celebrated at Magazzino Italian Art in Philipstown in an exhibit that runs through Jan. 9. Curated by Elena Re, it is the artist’s first solo exhibition in the U.S.

Its title, Tappeto-Natura, refers to “nature carpets” that Gilardi devised following a walk by a creek that was marred by garbage. The concept of humans being responsible for the environment was still new in the mid-1960s, and he decided to reconstruct nature without pollution.

The “carpets,” which take the forms of rugs, wall art or clothing, have occupied him for 50 years. They are molded with polyurethane foam and painted to resemble landscapes with rocks, vegetables and fruit, all in vivid hues and arranged and composed in ways which invite the eyes to travel. These are edens of melon, seabirds, husked corn.

“Gilardi creates shapes through an intaglio [carving] technique and saturates the material with synthetic pigment, first dissolving it in vinyl resin, and later in rubber latex,” Re explains.

The nature carpets — some of which were delivered to galleries rolled — stood in contrast to the consumerism of the pop art of the period but proved popular. Gilardi has said his intent was to “merge technology and nature — not to set them in opposition — and to suggest a homeostasis whereby industrial processes and materials could actually help in focusing society on the nascent environmentalist movement.”

Despite his early success, Gilardi, now 79, became disillusioned with the art world in the 1970s and receded for a decade. When he returned, he increasingly focused on political and community activism, although usually still through the prism of nature. He expanded his range to include new media, including virtual reality pieces and interactive installations.

Gilardi’s most recent project, which he began in 2008, is Parco Arte Vivente (Park of Living Art), or PAV, a museum and study center in his hometown of Turin, located on 6 acres of green space there. The grounds are frequently the site of outdoor, ecologically centered installations.

Magazzino Italian Art, at 2700 Route 9 in Philipstown, is open from 11 a.m. to 5 p.m. Thursday to Monday. Admission is free; make a reservation at magazzino.art.