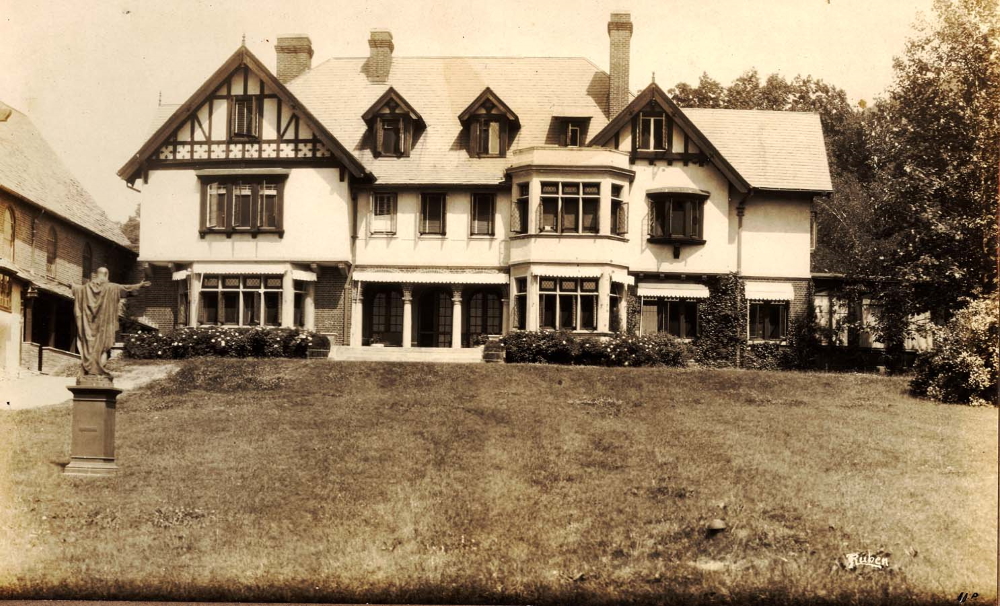 The mansion owned by the Ursuline Sisters burned down in 1972. (Beacon Historical Society)

Frank Walters died in the quarries at the Newark Lime and Cement Co. when a mass of rock and earth buried him following a blast. He was survived by his wife and six children in England.

A teamster from Newburgh was fined $25 at Fishkill Landing for cruelty for driving a horse pulling a heavy load of beer.

A fire about a mile in length burned atop Fishkill Mountain, illuminating Newburgh Bay.

Hattie Pierce of New York City was convicted of robbing John Jenkins of Fishkill of $40 by means of the “panel trick.” [According to a contemporary account, a common form of the con worked like this: A mark is brought to an office and shown a wrapped bundle of real bills that he is told are fine counterfeits. They are offered at  10 percent of face value. The swindler throws the bundle on the top of a desk and opens the desk to show the client something else. The upraised lid hides the bundle, which a confederate in the next room switches out through a panel in the wall with a bundle of sawdust. The mark pays and leaves but is unlikely to go the police since he was attempting to buy counterfeit bills.]

Homer Ramsdell purchased for $125,000 [$3 million today] a large amount of property formerly owned by the bankrupt Boston, Hartford and Erie Extension Railroad Co. He and George Brown, president of the Dutchess and Columbia Railroad Co., planned to move the terminus at Dutchess Junction about a mile north. They also said they would build an iron ferryboat to transfer up to 20 coal cars at a time across the river.

A muscular tramp named John Harrington, while being taken from Fishkill Landing to the Albany penitentiary by Officer Theodore Moith, jumped from the New York Central train as it ran at full speed (40 mph) about 3 miles north of Poughkeepsie. By one account, Harrington was handcuffed to the officer, who was dragged after his prisoner; the cuffs broke in the fall and Harrington ran into the woods. After a chase of 2 miles, he was captured by a railroad hand.

About 20 percent of the liquor dealers in Matteawan closed on May 1, when their annual liquor licenses expired, because of an 1896 state law that had made the certificates prohibitively expensive to renew at $200 each [$7,000]. The law’s stated goal was to reduce the number of liquor dealers.

Albert Goslin and Samuel Keller, two of the five men associated with the defunct E.S. Dean Co., accused of bilking 30,000 people with its “safe system of speculation,” were arrested in New York City on the complaint of Alfred Kemp of Fishkill Landing, who said he lost $50. The swindlers were said to have taken $7 million [$244 million]. 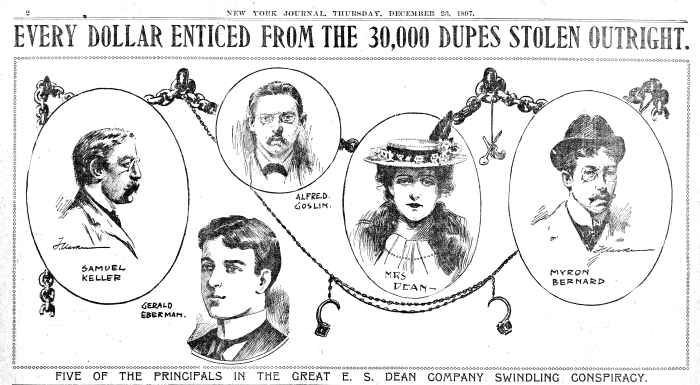 In 1897, Keller and Goslin were the first of five people arrested in the E.S. Dean Co. swindle, on the complaint of a resident of Fishkill Landing.

Arthur Palmer, who shot and killed his mother, brother and sister at their home in Mamaroneck, was pronounced insane and sent to the Matteawan Asylum for the Criminal Insane.

An unidentified flying object that might have been an airship appeared over Matteawan at 10:30 p.m. on a Thursday night and remained visible for about 20 minutes. According to a news report, “the aerial craft was sailing swiftly on a beam wind, with her prow pointed due north. In the port fore chains the excited citizens beheld what they thought was an able seaman heaving the lead. And a few minutes later a green cabin boy came to the rail and chucked a large pan of hot ashes to windward. A bright, green light, streaked with yellow, as seen flashing at intervals.”

John Van Vliet died at Matteawan at age 95. A boyhood friend, George Miller, the former longtime postmaster, often joked that he wanted to live longer than Van Vliet, even if by a day. Instead, he died in Brooklyn a week earlier at age 94.

A worker at Most’s hat factory at Matteawan was fatally injured when struck by a bursting shell in the “pouncing” room. [Hats were pounced with progressively fine sandpaper to create a smooth finish.]

While working on the boulevard on the grounds of the Matteawan asylum, inmate Edward Sheridan bolted for the woods. He was caught two days later along the river at Low Point [near Castle Point].

A fire destroyed 1,200 acres on the eastern side of Mount Beacon and Lamb Hill, although no buildings or cottages on the western side were damaged.

Mayor Irving Stafford notified the police after he said he saw a man and woman with an infant stagger out of an establishment owned by David and Hyman Pomeranz. Although police said the couple admitted buying whiskey from the brothers, in violation of temperance laws, they said at trial they couldn’t recall the visit.

A truck driver from Beacon was arrested for driving under the influence of alcohol after he crashed into a Poughkeepsie school.

A Beacon police officer was charged with using obscene and profane language while detaining a Wappingers Falls man for speeding.

The commissioner of public works for Beacon threatened to sue the secretary of the Taxpayers’ and Rentpayers’ Association for libel after the latter accused the highway department of being sloppy with its finances.

The Southern Dutchess Gas and Electric Co. excavated for a new building to meet increasing demand.

A 14-year-old girl, Thelma Bloomer, was taken before a judge for examination after she was committed to an institution in Rockland County for “feeble-minded” children who had the maximum mental capacity of a fourth grader. The girl had passed the sixth grade, and authorities charged that the girls’ father turned her over to the county welfare office because she and her boyfriend planned to elope.

A rainstorm that began at 4:30 p.m. and lasted more than an hour flooded cellars throughout the city, including in stores on Main Street. Five days later, the City Council said it would ask the Postwar Planning Commission to pay for an enlarged sewer system.

Navy Cmdr. Charles Goldier McIlwraith of Beacon received the Order of the British Empire in a ceremony in Washington, D.C.

The body of an infant boy, wrapped in newspapers, was found by city workers in a storm sewer catch basin at Ferry Street and Park Avenue. The county district attorney said investigators were contacting physicians and hospitals.

Following a revelation that New York City had paid as much as $640 a month in welfare to a single family, the commissioner of welfare for Dutchess County said an audit found the most it had paid was $178.35 per month to a woman and her 11 children.

Boxer Melio Bettina took on light heavyweight champion Gus Lesnevich at Madison Square Garden. “This is the big chance for the likable fighter from Beacon” in his quest to fight Joe Louis, said The Poughkeepsie Journal. “Melio has made little money since before the war and has been shunned by most promoters. Only Jimmy Grippo’s barrage of copy to the national press has kept his name before the public.” Lesnevich knocked out Bettina in 59 seconds — the first of three knockdowns that would end Bettina’s career.

The school board, by a 7-1 vote, passed resolutions requiring administrators to live within 10 miles of the district and all other employees within 25 miles. Soon after, the high school principal, Morton Tannenbaum, who lived in Rockland County, resigned, prompting protests by many students. They said the superintendent and school board refused to meet them for a “rap session” to discuss the new rule.

The school district received $120,000 in federal funds to launch a Spanish-English bilingual program.

Because of an especially rainy April, the city’s three reservoirs were running over, the public works commissioner told the City Council.

The Howland Library launched a campaign to raise $200,000 to renovate its new home in the former Tishman Building at Main and South Cedar streets and to increase its collection from 14,000 to 60,000 books. 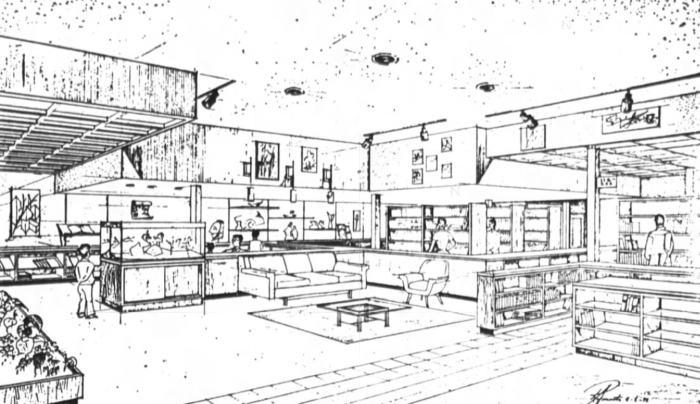 An architectural drawing from 1972 envisioned renovations at the Howland Library in its new home.

George Kohl of Fishkill and Frederick McCoy of Beacon won the fifth annual Dutchess-Putnam sectional bridge tournament, the first time the Kagan trophy had been claimed by male players.

Twelve nuns, priests and retreat guests were injured while fleeing an early morning fire that destroyed the Ursuline Noviate on DePuyster Avenue. The order had occupied the 18-room mansion, known as Hiddenbrooke, since buying it in 1922 from J. Noah Slee, president of the Three-in-One Oil Co.

The school district proposed a $33.8 million budget that would increase taxes by 1.98 percent. It was the first time that Beacon voters were allowed to vote on the budget under a new state law that applied to small-city districts.

A 30-year-old man was sentenced to 4-to-8 years in prison after being convicted of raping a woman on Hammond Field.

After 32 years in business, Ruby Looper retired and closed Looper Liquor. She and her husband had moved to Beacon from South Carolina in 1945. In 1974, they bought a junkyard on South Avenue and built Looper’s Plaza, later known as Fishkill Plaza.

The school district prepared to open a $2.2 million garage near Dutchess Stadium. It had been paying $86,000 a year to lease space for its 60 buses.