After one board votes on project, another proposes moratorium

When the Philipstown Planning Board last month allowed the proposed Hudson Highlands Reserve to clear a major procedural hurdle, it sparked concerns that following the letter of the law subverts the spirit of the law. It also inspired a call for a moratorium on similar development until the town can re-evaluate zoning regulations.

By a 4-2 vote on April 21, the Planning Board signed off on a state-mandated Final Environmental Impact Statement (FEIS), a 167-page discussion of the 24-home complex and its compatibility with the law and the environment.

Introduced to the Planning Board in 2014, the project involves a 210-acre parcel off Route 9 north of Cold Spring bounded by Horton Road and East Mountain Road North. It is the first conservation subdivision applicant considered by the town after enactment of the 2011 zoning code, which generally tightened land-use rules but now prompts fears that it falls short on regulation of conservation subdivisions — a form of development that in return for protecting nature might have more buildings than a typical suburban housing project could erect.

“I would highly recommend a moratorium” on conservation subdivisions, said Jan Baker, a Conservation Board member, at its May 10 meeting. “We know the current [code] language is ineffective. It doesn’t achieve the result the town wanted. That sort of cries out for a moratorium.”

Town Board Member Jason Angell, the liaison to the Conservation Board, said the situation indicates “that if the letter of the law is not living up to the spirit and main intent” for conservation subdivisions, “we should go back and see if it could be tightened.” Angell added that “because this major project set a precedent,” town officials should act “before another large project comes along.”

The HHR property includes a pond, woods, a circa-1815 barn (slated to become a clubhouse) and other environmental or historic features. The developer, Horton Road LLC, run by architect Ulises Liceaga, initially proposed an equestrian center, but that has been dropped. In addition, according to the FEIS, the project designates 163 acres for conservation “in perpetuity.” 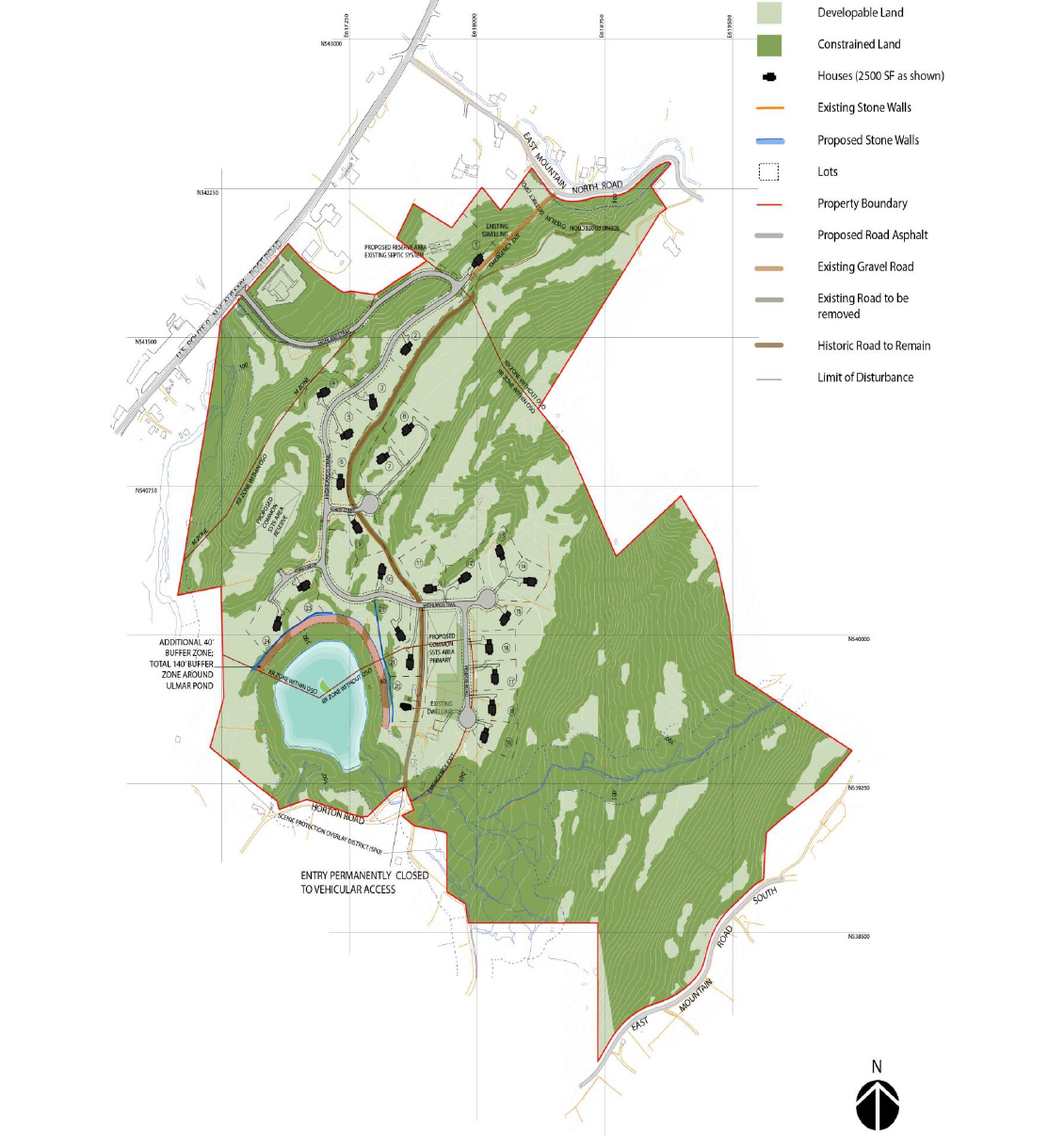 On this map of the proposed development, the black dots represent homes and the dark green is land that won’t be developed.

Over the last eight years, HHR has generated intense interest from neighbors and others who filled public hearings and wrote letters in opposition. Several complained to the Planning Board, after its vote, that HHR “fails to deliver on the intent of a conservation subdivision” as defined in the town code. Moreover, environmental groups, as well as members of the Conservation Board, expressed skepticism.

The Philipstown code encourages conservation subdivisions, “in which units are clustered or sited on those portions of a property most suitable for development, while leaving substantial portions as undeveloped,” a practice that “results in the preservation of contiguous open space and important environmental resources while allowing compact development, more walkable neighborhoods, and more flexibility than conventional subdivisions.”

The FEIS says that HHR employs “a clustered layout and preserves large areas that currently function as wildlife corridors.” Yet, as mapped, the homes do not appear to be particularly close to one another. The town code does not define clustering and notes that conservation subdivisions may include a variety of lot sizes.

HHR’s proposed layout reflects that of adjacent neighborhoods on Horton Road, Horton Court and Mill Road, the developers argue. But old tax rolls show that at least some of those properties were developed well before the town adopted the current zoning code.

Using smaller lots or making the homes contiguous or recasting them as townhomes would conflict with Philipstown’s desires to retain a rural character, according to the FEIS. And decreasing the number of houses — even from 24 to 19 — while enlarging lot sizes “will make the project [financially] infeasible,” it states.

Two Planning Board members who voted against the FEIS, Heidi Wendel and Peter Lewis, cited their reservations about the project’s impact on wildlife, whether it qualifies as a conservation subdivision and concerns that a homeowners’ association could ignore conservation requirements.

“We have no assurances those provisions will actually go into place,” said Wendel. Lewis added: “The homeowners’ association disturbs me. I’d like to see a full-time administrator, who can’t look the other way.” Lewis also said that “I’m sad there’s no public access. It gives me a feeling like it’s a gated community.”

December — The draft is revised.

May — The draft is revised again.

May 29 — A “notice of completion” is published for the draft.
June 20 — The Planning Board holds a public hearing.

2022
March 3 — The applicant submits a revised draft FEIS.
March 11 — AKRF and the town engineer provide a final set of revisions.
April 21 — The Planning Board votes 4-2 to accept the FEIS.
May 5 — The FEIS is filed with the town.

In January, the Conservation Board informed the Planning Board that it believes the developer has “not significantly lessened environmental impacts to the extent practicable” and “is evading the intent” of conservation subdivision regulations.

But Stephen Gaba, the town attorney, told the Planning Board on April 21 that “the project meets town code. There’s no question about that.” He said he understands the concerns about honoring the intent of the law but advised the board that “the clearest manifestation of the intent of the Town Board is the language it used” in the code. If HHR “meets the code as a matter of law, it meets the intent of the town,” he said.

Richard O’Rourke, Horton Road LLC’s lawyer, similarly emphasized that “the intention of the [zoning] legislation cannot override the clear provisions of the law.”

Consequently, the Planning Board felt it had no choice but to accept the FEIS, said Andy Galler, who chairs the Conservation Board, at its meeting on May 10. He recommended that the Planning and Conservation boards convene to determine what revisions are needed for the “somewhat problematic” code.

Work remains before the developer can break ground. For example, the Town Board must change the zoning on 11 acres of the site from industrial-manufacturing to rural residential, review the road plans and authorize creation of a sewer district. Going forward, the Planning Board will review the site plan and exercise other oversight.

One thought on “Spirit, or Letter, of the Law?”