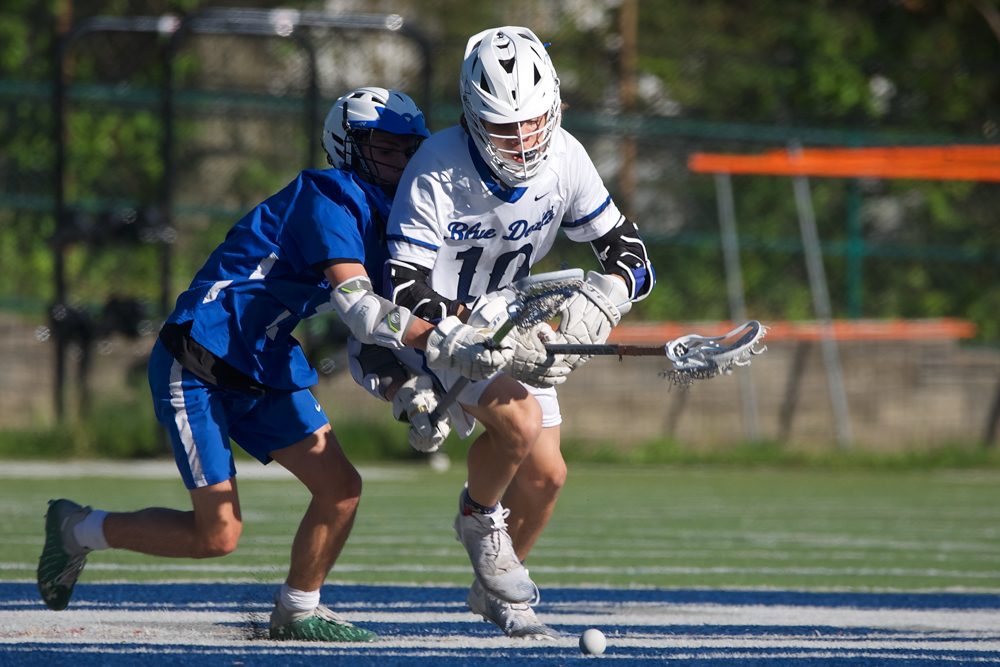 Sophomore face-off man Frankie DiGiglio heads for a ground ball in the first round of the playoffs.(Photos by S. Pearlman)

After a slow start, Haldane found its rhythm in the second quarter and cruised to a 13-4 victory over Dobbs Ferry in the first round of the Section I, Class D playoffs on Tuesday (May 17) in Cold Spring. 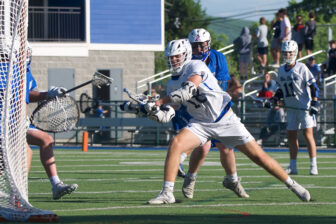 Against Dobbs Ferry (3-14), Haldane led after the first quarter, 2-1, then scored six goals in the second quarter for an 8-2 halftime lead.

“They surprised us a little early on,” said Coach Ed Crowe. “They were locking in on a couple of our guys and we were having trouble getting loose.” 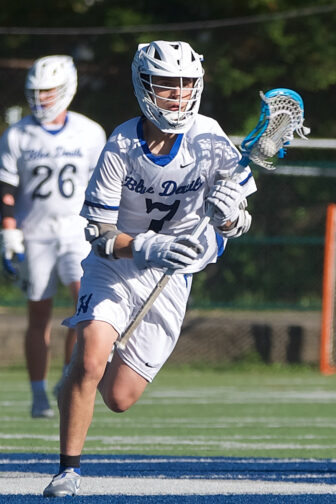 Sophomore Liam Gaugler had a hat trick against Dobbs Ferry.

“Evan has been the catalyst,” Crowe said. “He makes us go offensively. Liam has been finishing well. Both have doubled their totals [in goals and assists] from last year.

“And our defense, time and time again, has locked it up,” he said. “With Jordan in the net, and Brody Corless, Nate Stickle, Tommy Tucker and PJ Ruggiero —they’re all young. Sniffen does the little things — he scores, gets ground balls, plays good defense. We could be set for the next couple of seasons.”

Bronxville will be a challenge. “We have to play within ourselves, control pace and possession, and clear effectively,” Crowe said. “We want them to play with confidence, because when they do, we’re a tough out.”

Haldane fell on Tuesday (May 17) at Leffell, 9-7, in the first game of a best-of-three playoff series. Eighth grader Dan Nakabayashi started on the mound and was relieved by Trajan McCarthy. Jake Hotaling also pitched in relief.

Coach Simon Dudar said poor defense hurt the Blue Devils. “We had too many little plays that needed to be made,” he said. “Nerves seemed to be percolating throughout the early parts of the game.”

Haldane settled down: After entering the top of the seventh inning down 9-2, the team rallied and had the tying run at the plate. “The late-inning boost gave the guys confidence that we can even the series up,” Dudar said, which they did on Wednesday with a 4-0 victory. The deciding game at Leffell was scheduled for 3 p.m. today (May 20).

Beacon had an eight-game win streak going into yesterday’s game against Cornwall (10-1). It won its seventh straight on Tuesday, defeating Newburgh Free Academy, 8-7, and its eighth on Wednesday, edging Minisink Valley, 10-9.

The Bulldogs defeated Newburgh on a Joey Vollaro walkoff single in the bottom of the seventh. Ronnie Anzovino earned the win on the mound, pitching 3.2 innings of relief, striking out four. Vollaro had three hits, Tyler Haydt had two hits and a double, Jackson Atwell had two hits and three RBI, and Liam Murphy drove in two runs.

Beacon ended its season Tuesday (May 17) at Cornwall, dropping a 6-4 decision. Olivia Ciancanelli took the loss. At the plate, Ciancanelli went 2-for-3, Leanna Rinaldi drove in two runs and Bella White scored for the Bulldogs, who closed the spring at 5-15 (2-10 league).

“The girls played with passion the last few games of the year,” said Coach Michael Carofano. “It was nice to see them come together and have fun. Our eight seniors [Ciancanelli, Rinaldi, Makkaila Caputo, Briana Jones, Christina Merola, Olivia Spiak, Tess Wills and Haleigh Zukowski] will be missed next season.”

Beacon picked up its final win on May 14, topping Lourdes, 9-7, with Ciancanelli earning the victory. Merola and Wills each drove in two runs and Zukowski had a single to drive in a run. 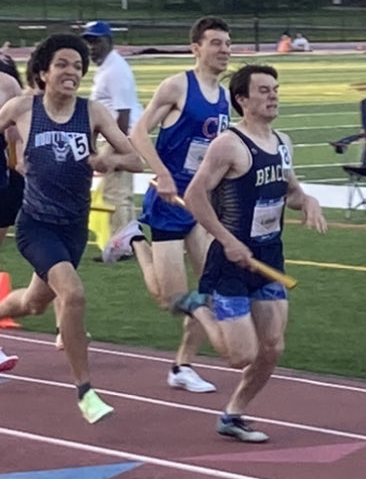 LaBelle at the finish. (Photo provided)

The Beacon boys defended their title in the sprint medley relay East Coast Challenge at the Loucks Games on May 12 at White Plains High School.

The team — Eddie Manente, Sal Migliore, Henry Reinke and Evan LaBelle — ran 1:56.21 for the final 800 meters to move from sixth place to victory. Beacon edged a team from Huntington, on Long Island, by five-hundredths of a second.

“That was one of my top 10 coaching moments of the last 20 years,” said Coach Jim Henry. “I was hoping we could run fast enough to sneak onto the podium. To win the race in such dramatic fashion was an adrenaline rush.” 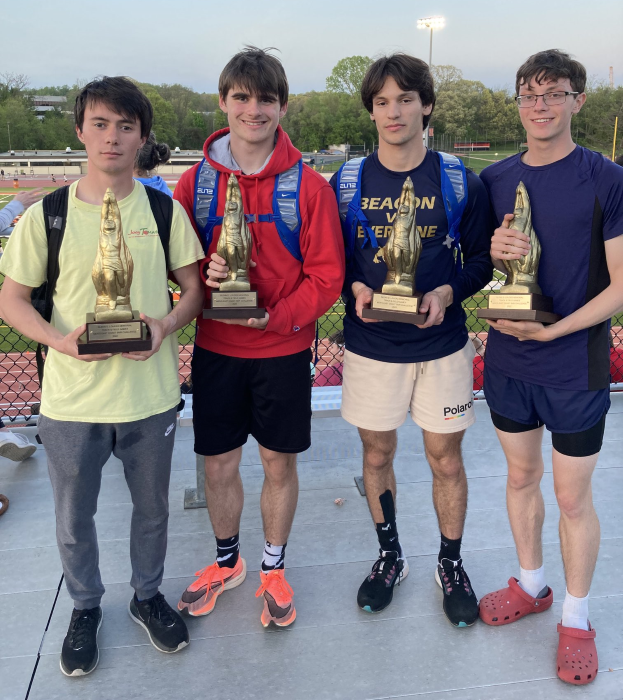 The Beacon sprint medley relay team poses with its hardware on May 12. (Photo provided)

The boys’ and girls’ teams lost to Monticello on Wednesday (May 18). The boys’ meet was a divisional championship won by Monticello.

Haldane, which fielded a varsity team for the first time this year, lost its initial playoff game on Tuesday (May 17), 19-5, at Briarcliff. Mairead O’Hara had three goals to lead the Blue Devils.

“We had a great season,” said Coach Keri Dempsey. “The girls hustled and worked hard every game, and getting to sectionals was awesome. I’m so proud of how far they’ve come and grown this season.”

Beacon (3-9) ended its season on Tuesday with an 11-4 loss at New Paltz. Anaya Camacho had three goals and Kasey Senior added one. “We’re looking forward to next season, and are excited to see the team continuing to grow,” said Coach Taylor Modica.