Vines can be a gardener’s great joy in the landscape and also the biggest frustration. Because they are tenacious and expansive, vines provoke strong feelings no matter where they show up. A bit of care and planning before planting can help make it a better experience. 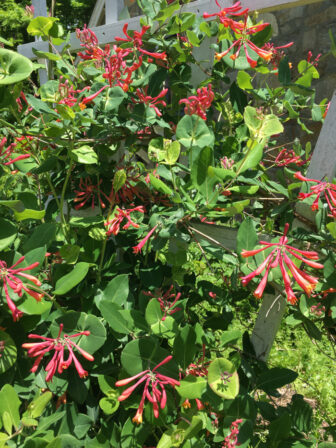 Treat your yard to a nicely behaved and lovely vine this season with native honeysuckle. (Photo by P. Doan)

Vines are herbaceous plants that can be annual, biennial or perennial. Their unusual movement distinguishes them from other herbaceous plants. They can have little cup-like suckers or tendrils that attach to surfaces or they locomote by twining around, through and over anything they can reach.

Climbing roses and bougainvillea don’t have suckers or tendrils and aren’t vines. They need assistance and have to be tied and fixed on a trellis or wall.

Focus vine growth by fastening them in places that you want them to go — otherwise that trellis might not get used and the side of the house will be covered. The fast and seemingly unlimited growth rate of vines — fox grape grows to treetops — make them good possibilities for privacy screening and unique uses.

Frequently seen covering walls or draping over arbors, vines are limited only by their opportunities. Train vines to create interesting shapes and forms and add vertical drama to the landscape. Search for metal or wood structures, whether created through DIY designs — gardeners love to share ideas online — or commercial stock. Plastic may not hold up to the weight of a thick, woody vine.

When it’s grown on a wall, take care that the vine won’t tether itself to siding or mortar that can be damaged as it burrows under or into materials. Moisture is also a consideration because a thick vine layer can trap water against a wall, leading to rot or mold. A masonry wall facing south is probably the safest bet for growing on a house. Get a similar effect by using a braced, freestanding trellis a short distance away.

Coral or trumpet honeysuckle (Lonicera sempervirens) is my favorite and beloved of hummingbirds. While it will fill in the space it’s given, it takes its time and isn’t as aggressive as other vines. Although it’s said to tolerate part-shade, until I moved mine from a shadier area, it survived but did not grow more than a few inches. Now in full sun, it has made it halfway up an 8-foot trellis in a single season. The long, tubular flowers are present from spring through summer. Plant it near a window where it will be seen often.

Virgin’s bower (Clematis virginiana) has less showy flowers than species from other points of origin, but it is a host plant for the clematis clearwing moth, which can’t be said of others. The white flowers last about a month in late summer and I appreciate the way they light up a space. It will also tolerate less than full sun.

Dutchman’s pipe (Aristolochia macrophylla) is another twining vine with heart-shaped leaves and a peculiar rich, delicate brown flower that is shaped, yes, like a pipe. If you’d love to see a beautiful, blue pipevine swallowtail butterfly, having Dutchman’s pipe is the way. It’s a host plant, one of two in the Northeast, and the butterfly will lay its eggs on it and the caterpillars will feed on the leaves. Since Dutchman’s pipe is native to Appalachian forests, it grows well in the understory in more shade than many vines.

Mile-a-minute weed (Persicaria perfoliata) will grow up to 6 inches in a day and can smother other vegetation by forming a dense mat over it. While it has been more problematic in warmer climates south of the Hudson Valley, it has been creeping in and causes great concern among ecologists.

Kudzu, known as the vine that ate the South, is also on the move in New York. Growing up to a foot a day, it was originally planted and cultivated to prevent erosion in the early 20th century. Found in at least 30 states, kudzu in some areas has covered every tree in the forest.

Oriental bittersweet (Celastrus orbiculatus) is a woody vine that twines around neighboring plants and trees so effectively that it will actually girdle a mature hardwood tree. Girdling means that it chokes off the flow of water and nutrients up and down the trunk. It spreads through a profusion of seeds and underground so act fast to get it under control if you find it in your yard.