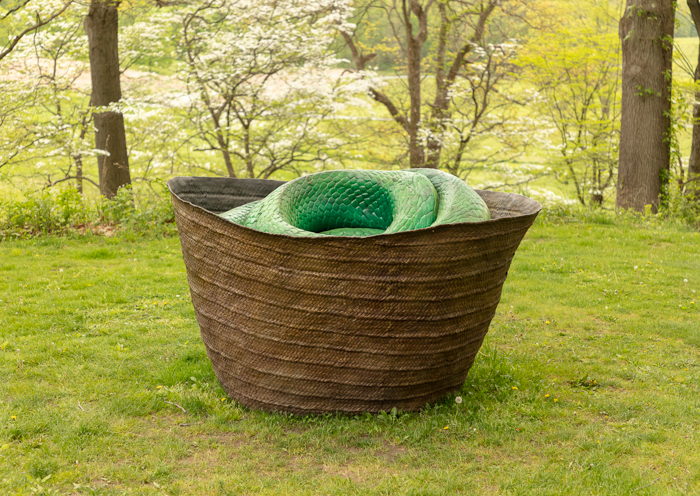 Works by two artists, plus a screening of films

The Storm King Art Center is not all about stunning backdrops in a scenic spot on the Hudson: The 500-acre park in New Windsor uses its site and sculptures to probe the world at large. Although much of its sculpture is permanently installed, it also mounts seasonal exhibitions that often comment on current events. 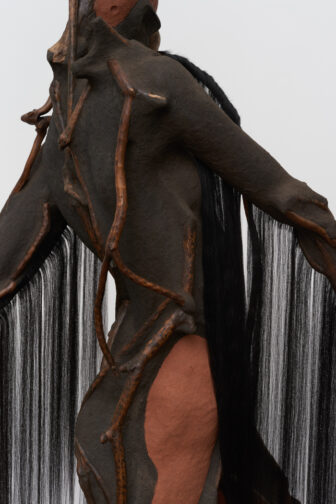 Detail from “She Walks” by Wangechi Mutu

This year, Storm King will showcase bronze sculptures and earthworks by Kenyan-born Wangechi Mutu, presented in an indoor and outdoor exhibition accompanied by a screening of the artist’s films. In addition, an installation by New York City-based Brandon Ndife is his largest artwork yet. Both exhibits continue through Nov. 7.

With Mutu and Ndife’s work at its core, the 2022 season at Storm King “provides visitors with very different approaches to art in nature, site-responsiveness and the ways in which sculpture participates in and comments upon events in the world,” says Nora Lawrence, the artistic director and chief curator at Storm King.

Mutu uses a wide range of items for her sculptures and collage paintings, and during her performance rituals and films. Materials include ink, soil, ash, bronze, driftwood, horn, pigments, wine and hair. Her bronze works, including cast-bronze woven baskets holding the coiled bodies of bronze serpents and giant bronze tortoise shells, are on view in the fields, meadows, woods and ponds.

Unveiled last week, “Crocodylus” is a 15-foot sculpture installed on Museum Hill, the park’s highest spot, offering a vista over the South Fields, Nearby is a bronze canoe fountain, “In Two Canoe,” which offers a view of “Crocodylus” and the snake basket work.

Other works will be shown indoors, including “The Glider,” made in 2021 using materials collected in East Africa, and on exhibit for the first time. In addition, My Cave Call, a film she made last year, in which she transforms into a mythical figure in the volcano town of Suswa, in Kenya’s Rift Valley, will be shown frequently. There will be an outdoor screening of other Mutu films later in the season.

Further south in Storm King’s fields, Ndife will present his first outdoor sculpture project. He works primarily with familiar items such as furniture and kitchenware he makes by hand, changing their appearance by casting them in polyurethane foam and resin, and often embedding household items in the surfaces.

“The effect is one that is organic and sinister, suggesting a process of rot that subsumes the quotidian objects and embalms them in a perpetual state of decay,” according to Storm King.

This project, Shade Tree, has been installed in the Maple Rooms, where stands of maple trees divide the woods into quadrants. “Ndife’s sculptures take on an imposing scale in this setting — with whole tables and chairs embedded into the casts, which will be placed in the shade of the canopy and encircle the trunks of four maple trees,” Lawrence says.

Ndife calls the setting conducive to “playing with interiority and exteriority, protection and exposure. A lot of my work is about the interior, about these spaces that we deem safe because they’re in our homes — our cabinets, our dressers, our personal space. Working outside, I wanted to extend that conversation and think about exclusion — planned exclusion — and nature’s course, which is a canopy above all of us, something that we affect but can’t control.

“The exhibition interrogates the legacy of redlining, or the systematically sanctioned segregation of real estate, which recent studies have shown often left poorer communities and communities of color in urban areas with fewer green spaces and less tree cover,” he adds.

The Storm King Art Center, at 1 Museum Road in New Windsor, is open from 10 a.m. to 5:30 p.m. daily except Tuesdays. The last admission is at 4 p.m. Reservations are typically required, except for members; see stormking.org/visit. Tickets are offered per vehicle and start at $23; admission is free with registration on the first Friday of each month in June, July and August. Storm King also offers a shuttle from the Beacon train station on Saturdays, Sundays and holiday Mondays for $35 ($18 members, $32 students, $20 children). Free passes that don’t require reservations are available at the Beacon, Cold Spring and Garrison libraries for one car with up to six people.