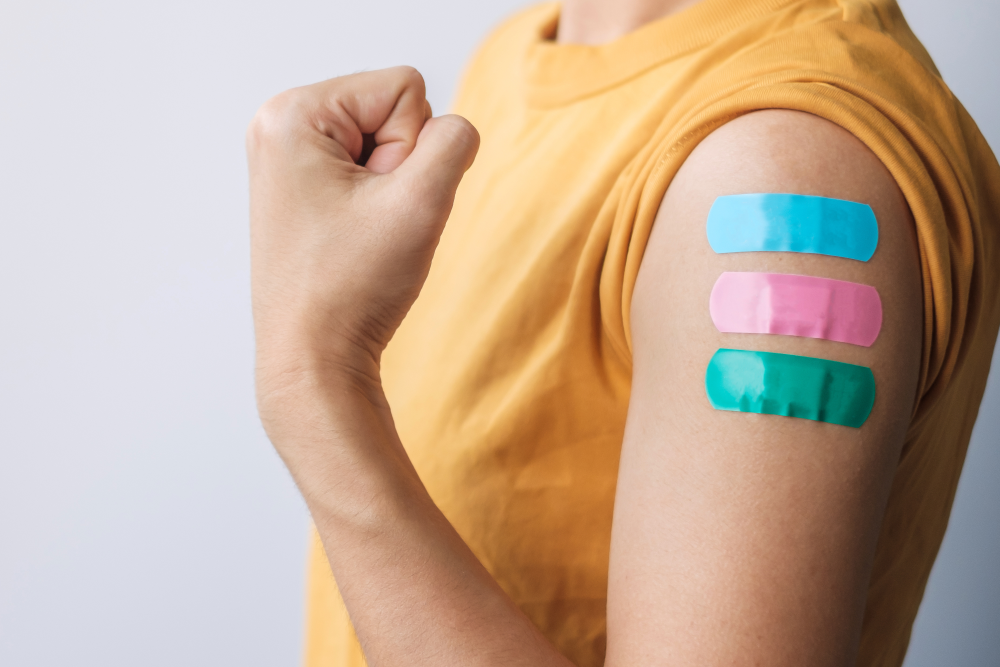 ■ Dutchess County is encouraging residents who test positive to ask their doctors about using approved antiviral and antibody drugs that can reduce the chances of a severe infection. “There are now medications that can mitigate the impacts and avoid hospitalization,” Health Commissioner Livia Santiago-Rosado said on May 24. “We encourage residents who test positive to explore this option quickly.”

■ The Food and Drug Administration authorized on May 17 a single booster dose of the Pfizer vaccine for children between 5 and 11 years old. The dose is recommended at least five months after the primary series of shots. The FDA had already authorized a booster dose for adolescents between 12 and 15 years old. The announcement is posted at the agency’s website.

■ The state Department of Health is recommending indoor mask-wearing for both vaccinated and unvaccinated residents, of Dutchess and Putnam, which are among the counties in New York designated “high risk” because of infection levels. The state reported a COVID-19 case rate of 51.8 per 100,000 for Dutchess as of May 12, compared to 6.8 on March 1. Putnam’s rate per 100,000 rose from 8.1 per 100,000 on March 1 to 79.9. The state’s data does not include positive cases from at-home tests unless residents report their results.

■ Hochul said on May 8 that she had tested positive for COVID-19. The governor said she was asymptomatic and would work remotely this week while isolating.

■ Dutchess County exceeded 100 new positive cases for a fourth straight day on May 5, the first time that has occurred since the first four days of February. Cases also continue to rise in Putnam County, according to state data, which does not reflect all positive cases because people are not required to report results from at-home tests. The state reported an average of 54 new cases a day for Putnam County from May 3 to May 6, a level the county last reached in late-January.

■ Dutchess County reported 482 active cases as of April 23, its highest total since Feb. 6. Active cases in the county have more than doubled since April 5. The total is most likely an undercount because people who test positive using home COVID-19 tests are not required to report their results. 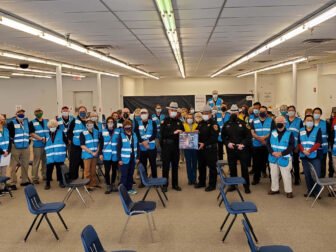 Volunteers with the Dutchess County Medical Reserve Corps won a national award for their work during the county’s pandemic response.

■ Two new “highly contagious” subvariants of the Omicron variant “are likely contributing” to the rise in new COVID-19 cases in the Central New York and Finger Lakes regions, the state Department of Health said on April 13. While there is no evidence that the subvariants cause more severe symptoms, “The Department’s findings are the first reported instances of significant community spread due to the new subvariants in the United States,” said DOH.

■ The Food and Drug Administration on April 14 authorized, for emergency use, the InspectIR COVID-19 Breathalyzer, which can detect COVID-19 using breath samples. The test, done with a device that is the size of carry-on luggage, can provide results in less than three minutes, said the FDA. In a study of 2,409 people, the test correctly identified 91.2 percent of positive samples and 99.3 percent of negative samples, according to the agency.

■ The 57 new COVID-19 cases in Dutchess County reported by the state Department of Health for April 5 was the county’s highest-one day total since Feb. 12, reflecting a general uptick in infections statewide. Putnam’s 38 new cases on Tuesday was its highest one-day total since Feb. 17.

■ New York state residents who are eligible can begin making appointments for a second booster shot if at least four months have passed since their first booster, said Hochul on April 2. The FDA authorized second Pfizer or Moderna boosters for: anyone age 50 and over; those who received the Johnson & Johnson vaccine for both their primary and first booster shots; and residents 18 and over with compromised immune systems. The shots are free. More information is available at the state’s booster dose webpage.

■ Of the 57 positive COVID-19 cases reported since March 13 among Putnam County students, 49 were confirmed in the seven-day period ending March 26, according to date from the state, which lifted its mask mandate for schools on March 2. Nine of Haldane’s 14 student positives since March 13 were reported between March 20 and Saturday, and all three of Garrison’s. Five Beacon students have tested positive since March 13, including two during the seven-day period ending Saturday.

■ Despite a “small relative uptick” in COVID-19 cases, state Health Commissioner Mary Bassett said on March 21 that the state is not expecting a wave of new cases from the subvariant of the Omicron variant designated BA.2. While BA.2 is behind a new growth in cases in Europe, and is more transmissible than Omicron, it “does not appear to cause more severe illness and it doesn’t appear to have any more ability to evade the vaccination immunity,” said Bassett. The subvariant represents about 42 percent of new cases, she said.

■ New York will distribute 20 million testing kits to schools, nursing homes, adult care facilities, senior centers and food banks, and to elected officials for distribution to the public, Hochul said on March 17. For schools, 1 million tests will be distributed every other week until the school year ends, she said. The state said it has so far given out more than 54 million kits since Jan. 1.

■ Masks will no longer be required at the Philipstown Community Center starting on March 2, said Amber Stickle, director of the town’s Recreation Department.

■ New York’s mask mandate for schools and daycare programs will end, effective March 2, Hochul said on Feb. 27. “With more New Yorkers getting vaccinated, and the steady decline over the past several weeks in cases and hospitalizations from Omicron, we are now entering a new phase of the pandemic,” she said. Counties and cities can still impose their own mask mandates. Dutchess County Executive Marc Molinaro said on Sunday that he will not require them in local school districts. The order does not prevent parents from sending their children to school with masks.

■ New York State will not enforce a Feb. 21 deadline for workers at hospitals, nursing homes and other health care facilities to receive a booster shot “in order to avoid potential staffing issues and give healthcare workers more time,” Health Commissioner Mary Bassett said on Feb. 18. “The state will reassess in three months whether additional steps need to be taken to increase booster rates among the healthcare work force,” said Bassett.

■ Haldane’s administrators will be speaking to students about a possible end to the state’s mask mandate for schools in the next weeks, Superintendent Philip Benante said in an email to parents on Feb. 17. Gov. Kathy Hochul has said that the state will renew the mask requirement for schools during the first week of March. Benante said that the end to the mandate will not affect other health and safety measures, including air filtration, the use of outdoor spaces and social distancing.

■ The state reported 7 new COVID-19 cases for Putnam County on Feb. 13, the first time positive cases for any single day of testing have been below 10 since Nov. 8.

■ A study of hospitalizations and emergency room and urgent care visits showed that a booster dose of the Pfizer and Moderna vaccines was 91 percent effective against hospitalization during the Omicron wave for people who had their third shot within two months and 78 percent effective for those who had it four months or later, said the Centers for Disease Control and Prevention on Feb. 11.

■ The state on Feb. 10 lifted a mandate that businesses and venues require masks indoors or verify that customers are vaccinated. Counties and individual businesses can still require that customers wear masks. The mandate had been put into place Dec. 10 in response to a wave of COVID-19 cases fueled by the Omicron variant, but that surge is receding. “Business owners still have the the right to set rules regarding masking for their facilities, so please be respectful of their decisions,” said Beacon Mayor Lee Kyriacou in an email to residents. A mask requirement remains for schools, health care and adult-care facilities, homeless and domestic violence shelters and public transportation, said Gov. Hochul. The mandate for schools will be reassessed during the first week of March, she said.

■ As of Feb. 7, new daily COVID-19 cases in Dutchess County had fallen to pre-Omicron levels. The 66 new cases reported on Monday represented the third straight day Dutchess reported fewer than 100. It was also just the fourth day the county was under 100 new cases since Nov. 29, just before the Omicron variant fueled a record-breaking wave of infections. Dutchess set a pandemic high of 1,110 new cases on Jan. 7. Putnam County is experiencing the same trend. As of Monday, new cases had been below 30 for four straight days. Less than four weeks earlier, on Dec. 28, Putnam had a pandemic high of 630 new cases.

■ Dutchess County will distribute free home COVID-19 test kits and KN95 masks during a drive-through event from 11 a.m. to 1 p.m. on Feb. 6 at Red Hook High School, 103 W. Market St. in Red Hook. Kits will be limited to county residents and two per vehicle. Each kit contains two tests.

■ Beacon is planning to distribute free at-home COVID-19 tests from 5 to 7:30 p.m. on Feb. 1 at two locations: Howland Public Library at 313 Main St. and the city Recreation Department at 23 W. Center St. The city is giving out one kit per household and requires proof of Beacon residency. Visit beaconny.gov for more information.

■ Putnam County is reducing hours at its COVID-19 testing sites in Philipstown and Carmel. The Philipstown Recreation Center at 107 Glenclyffe in Garrison will be open for testing on Wednesdays only, from 10 a.m. to 5 p.m., the county said on Jan. 28. The Paladin Center at 39 Seminary Hill Road in Carmel will open for testing on Mondays and Fridays, from 10 a.m. to 5 p.m.

■ Putnam County’s Department of Health will hold its last vaccination clinic on Feb. 8. The county, which has vaccinated about 25,400 people since opening its first clinic in January 2021, is winding down as cases fall and “people are now, unfortunately, not worrying about getting vaccinated,” said Dr. Michael Nesheiwat, health commissioner, on Jan. 28. Pharmacies and other providers will be able to handle the future demand for vaccinations, he said.

■ New York’s indoor mask mandate, which is being challenged in state court, will be extended to Feb. 10, Gov. Hochul said on Jan. 28. Her administration is appealing a state Supreme Court ruling that the mandate is unconstitutional because it was ordered by the Department of Health and not approved by the Legislature.