It’s not unusual for an old building to be repurposed: a firehouse becomes a glass studio; a blacksmith’s shop becomes an architect’s office; a barn becomes a house.

But, what to do with a former jail? 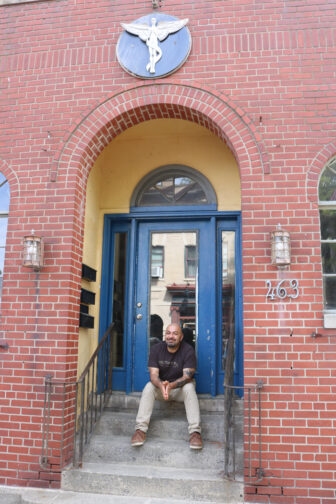 The new owner on his stoop (Photos by M. Turton)

Repurposing will be nothing new for the two-story brick structure at 463 Main St. During the late 19th century, it was the Matteawan Village Hall. When Matteawan and Fishkill Landing merged in 1913 to become Beacon, it became the police station.

In 1935, the building was renovated by the Works Progress Administration (WPA), a program implemented by President Franklin D. Roosevelt at the height of the Great Depression. During the makeover, which cost $24,294 (about $512,600 today), the police moved to the Beacon Engine firehouse on East Main, adjacent to present-day Dogwood.

The department remained at 463 Main St. until 1996, when it moved to 1 Municipal Plaza.

The building was sold and over the years was home to businesses such as, most recently, a vintage clothing boutique.

Because Jamal owns Tito Santana, Ziatun, Wednesday-Thursday-Friday and the Beacon Bread Co., it is easy to envision 463 Main as a restaurant. But Jamal said he is still undecided about what to do with the historic building.

Then, seconds later: “I’ve always wanted to do Japanese. I’m not going to pass up a great sushi chef. But, you know, the stars all have to be aligned.”

During a tour, he pointed out some features, such as file cabinets in the basement that date to 1896, and jail cells.

“I have all the keys,” he said. “I was thinking of an Airbnb. You lock yourself up, and you have to pay bail to get out!” (Actually, he said, he plans to donate the keys to the Beacon Historical Society.) A nightclub with cells is another possibility, he mused. 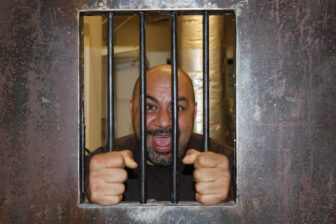 The second floor of the building, now an apartment, was once the courthouse.

Jamal beamed when noting that part of the last episode of Seinfeld was shot in the building. But soon he returned to his creative predicament.

“The building’s history is a motivator for having it themed or putting an appropriate business here,” he said. “You don’t throw just anything in here, you want to choose your niche.”

He thinks the main floor could accommodate a second apartment, leaving the front of the building open for a storefront.

“It has to be something cool and creative, something that complements Main Street and helps other businesses,” Jamal said. “I could see a lounge here; a good whiskey bar. It could be a place where you just come and hang out, a tearoom even.

“We’ve been approached by people about doing different things and even had to sign confidentiality agreements,” he added. “There are possibilities I can’t divulge. There are a lot of creative people in town. This is going to be fun.”

Old buildings almost always produce surprises. One of Jamal’s favorites is the vintage jukebox left behind by a previous owner.

“I don’t think it was in the jail!” he said with a laugh as he flipped through a box of thick, long-playing records. “Ever hear of Glenn Miller, or Patti Page?”

There’s no mystery about the basement’s future.

“It’s going to be my man cave,” Jamal said. “I’ll have my tools, get back into different hobbies, working with wood, and I think I’m going to start welding.”

He isn’t worried about ghosts. He said he brought a Quran when first exploring the building. “I said some prayers and walked around, giving good vibes, good energy, good prayers, and hopefully pushing out whatever evil spirits that are in here,” Jamal said. “I like to look at a police station as a good place — unless you’re a criminal!”