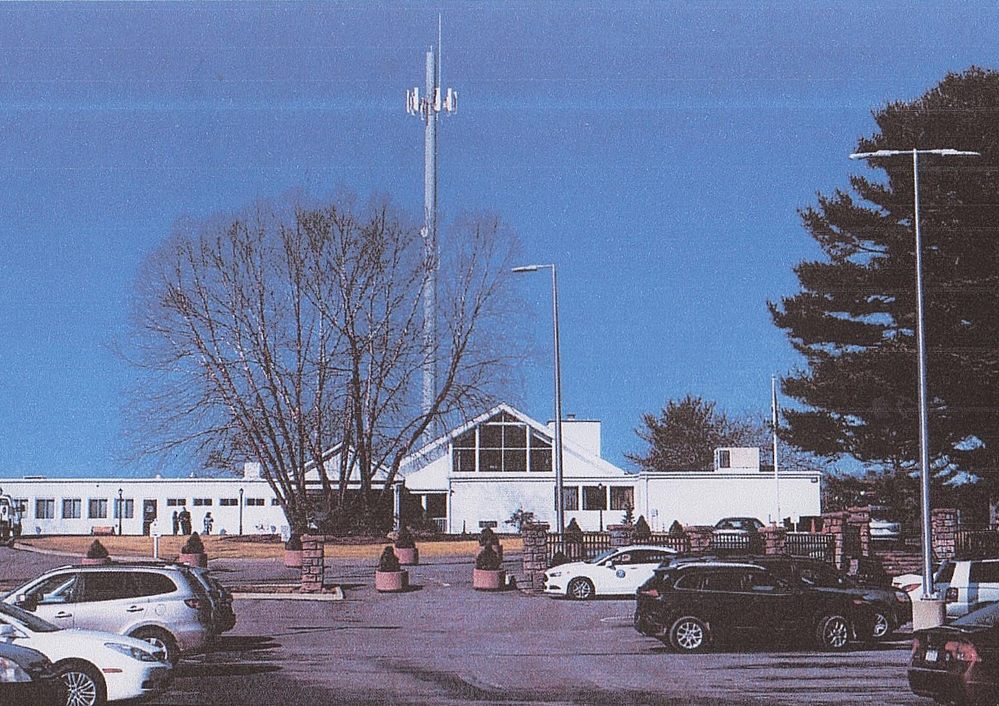 A schematic shows the proposed location for a cell tower at the Putnam County Golf Course in Mahopac.

Putnam legislators on Tuesday (June 7) moved toward construction of a 160-foot cell tower behind the clubhouse at the Putnam County Golf Course, which the county has been trying to upgrade with federal funding.

At its formal monthly meeting in Carmel, the nine-person Legislature declared itself the “lead agency,” or authority, to sign off on a mandatory state environmental review for the tower.

The tower is a project of Homeland Towers, which previously sued Philipstown and Nelsonville after they denied permits for 120-foot and 95-foot towers, respectively. Both cases ended in settlements, but the Nelsonville tower is now embroiled in litigation with neighbors.

The golf-course tower would occupy a 3,600-square-foot compound, enclosed by an 8-foot fence, in the maintenance yard. It would hold wireless gear for commercial telecom firms, as well as county and municipal emergency services, according to the Legislature and a memo from On Air Engineering, a Philipstown-based company.

In Tuesday’s resolution, legislators stated that the section of the golf course chosen for the tower “is not needed for any other use,” that the structure will help “close significant gaps in reliable wireless service,” and that Putnam wants to install it in a private-public partnership with Homeland. They also said Putnam would explore whether the project is exempt from Mahopac zoning laws.

Legislators spent fewer than 25 seconds on the issue on Tuesday, although a brief discussion occurred May 19 at the Physical Services Committee about putting the tower somewhere less visible.

“It sounds like this is not a thing of beauty,” said Legislator Carl Albano of Carmel, who chairs the committee. “Aesthetics is important.” County officials replied that Homeland Towers found the spot behind the clubhouse to be the best option.

Albano and his colleagues, including Legislator Nancy Montgomery, who represents Philipstown and part of Putnam Valley, voted unanimously on June 7 to proceed with the tower review.

Also on Tuesday, the Legislature voted 8-1 to spend $15,000 to hire a part-time clerk for the Sheriff’s Department Civil Division for the remainder of 2022. Montgomery voted “no.”

“I don’t see the need for this position, especially in light of the need to have more boots on the ground,” such as a deputy for the Civil Division who could, in urgent situations, also serve in the field — a potential need because “there’s obviously been a decrease, a cut, in road patrols,” she said.

Legislator Paul Jonke of Southeast responded that “we should leave it to the sheriff, who’s elected to do that job and make these decisions.” Legislator Ginny Nacerino of Patterson similarly asserted that “the assessment of what is needed in the Sheriff’s Department is under the purview of the sheriff. So let’s keep it that way.”

Sheriff Kevin McConville, a Republican like all the legislators except Montgomery, who is a Democrat, defeated the then-incumbent, Sheriff Robert Langley Jr., a Democrat, in November. In contrast to McConville, the Legislature frequently grilled Langley about his management of the department.

Now, “it’s obviously a different scenario” from the Langley days, “when the sheriff had no purview over what was right for his department,” Montgomery said on Tuesday.

In other matters concerning the Sheriff’s Department, the Legislature unanimously voted to equip officers and patrol cars with body cameras and license-plate readers.