I don’t like to brag, but I’ve managed to have surgery four times since the beginning of 2020, pandemic and all.

In January and February 2020, respectively, I had carpal tunnel surgery on each wrist. Then, at the end of 2020, I had another operation to repair a herniated disk in my back.

Unfortunately, that one didn’t take, and the disk reherniated eight months later. I could tell something was wrong in August, and by September the pain was unbearable. If you saw me last fall leaving early from a Beacon City Council or school board meeting, or from Thursday proofreading at The Current office in Cold Spring, it’s because I was rushing home to lay down, ice my back and cry.

After fighting with my insurance company for months to get the procedure approved, I found myself in the operating room again a month ago for back surgery No. 2. This was a big one — spinal fusion, which I assure you, as I write while still convalescing, was no joke at all.

Normal disk repair surgery is minimally invasive and involves removing pieces of the gel-like tissue that acts as a cushion between vertebrae, but can rupture, like a jelly doughnut. When that failed on me, the next step was fusion, which permanently connects the vertebrae above and below the injured disk, using heavy-duty screws and a titanium cage to hold everything in place while the bones grow together.

Neither surgery had been on my to-do list, as I’m fairly young to have such serious problems. My doctor’s best guess is that my issues are hereditary, so, thanks, dad. (He’s also a veteran of two back operations, although, in his defense, smarter exercising and better posture in my younger years would have helped me, too.)

My first procedure was outpatient, so I was home in my own bed the same night. Where I went wrong was pushing myself too hard out of the gate as I recovered.

The COVID-19 vaccines were just being rolled out in January 2021, so almost everything, including The Current, was still remote.

That made it easy to continue working as I had been for nine months. Staff meetings, as well as municipal meetings, were held by Zoom. We wrote, filed and proofread stories online.

Unfortunately, I now realize, hanging around the house recuperating and hanging around the house recuperating with a laptop are not the same thing. I didn’t listen to my body and give it the rest it needed. Instead, I’d settle on the bed or couch with all the necessary cushioning, plus my laptop and notebook (and then call out for my wife because I forgot to grab the phone). Thirty minutes later, I’d have to change positions and do it all over again.

Being “on” adds a layer of mental and physical stress that’s difficult to handle when your body has already been through the trauma of surgery.

This time around, I was determined not to make the same mistake. I wasn’t going to think about work for two weeks, minimum. I mostly stuck to it — a good thing, too, because this surgery ran over me like a tank and then backed over my pummeled body again for good measure. 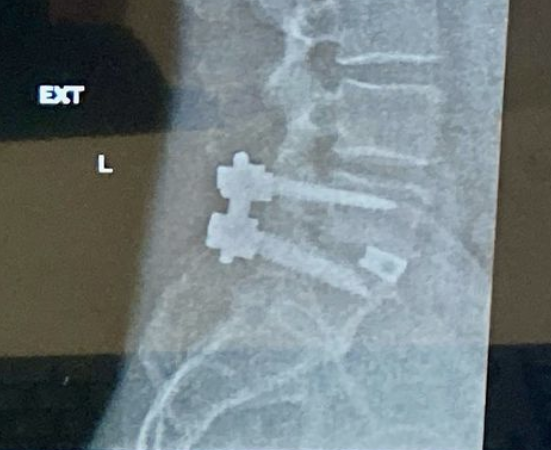 While my back felt reasonably OK after the procedure, my surgeon said the muscle and nerves he had to cut through and/or move were going to be “angry.”

Indeed, they were. By the fourth day, once I was home from the hospital and off the most powerful (intravenous) painkillers, my left leg was in scream-out-loud pain from hip to toe. I could barely walk. The only relief was a combination of muscle relaxers and oral painkillers strong enough to quickly put me to sleep.

I couldn’t watch TV; I couldn’t read. There were only two settings: hurt and sleep.

By Week 2, once we’d gotten the leg under control through steroids and nerve inhibitors, which I’m still taking, I began to feel guilty, like, “Isn’t there something I should be working on?” But, as my wife — who should be nominated for sainthood after taking care of me through this — kept reminding me, I’d just gone through major surgery, not to speak of the 18 months during which my body had compensated for near-constant pain. All I could do was rest.

By last week, I was on my feet more and outside walking several times a day. (Walking apparently helps the body recover and encourages my newly fused bones to grow. It’s also the only exercise I’m allowed until I’m further along in what is likely a three- to four-month recovery.)

This week I had a one-month check-up with my surgeon. I’m still feeling electric shocks in strange places as my angry nerves calm down but, overall, everything looks good; physical therapy is next.

Of course, this isn’t how I envisioned my summer, and I’m particularly sore that my season pass at SplashDown Beach won’t be used to its potential. Combine all this with a torn labrum in 2009 and a broken leg a year later, and I’ve got six notches on my surgical belt, which is more than enough. I’m to the point where I’m not sure I can get past airport security with all the hardware I’m carrying around.

Nonetheless, I’m eager to get back to covering Beacon and, between you and me, I’m holding out hope that I’ll get one run in with my son on the Megalodon before SplashDown closes for the season.

One thought on “Reporter’s Notebook: Back in the Saddle”