A burst of spring flowers, then June brings in a new wave as the others fade. The landscape looks robust and vital. Growth! And yet, all I can see are problems. A green hell.

Here’s an example: In a single 5×5 area next to the path where the dog and I walk, I can count Oriental bittersweet, Japanese barberry, phragmites, mugwort, tree of heaven and wineberry. On the other side of the path is a multiflora rose that came to join the party. 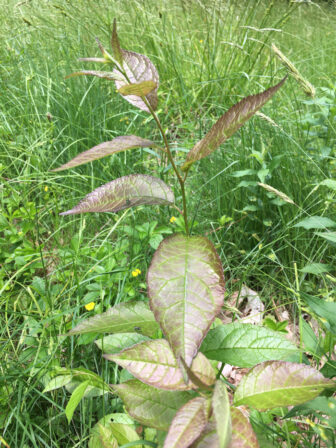 Hope comes in the form of a seedling winterberry bush that emerged in an area that isn’t mowed any longer. (Photo by P. Doan )

All of these have an underlayer of vinca vine, another non-native, impossible-to-get-rid-of plant jerk that doesn’t belong in the forest, but was placed here by a previous owner. Behind all of this I can see the pachysandra is holding its own against a monoculture of hay-scented fern fields that becomes thicker and more expansive every year. I am watching to see if the wineberry can grow through it. It wants to.

It should be getting better by now and better means more native habitat and less space taken up by ecological outliers. I want the insects and birds and wildlife to thrive. I want my little patch of land to be a renewed haven in a degenerating world. It is so much work.

The emotional toil is harder than the strategizing and labor on how to cover, kill and replant, honestly. The feeling that this isn’t a realistic endeavor without full-time efforts or a staff or a large budget prevails. At least machinery instead of hand tools!

Gardening certainly has therapeutic benefits. The day I found out that a dear friend was going to hospice, I laid waste to the forsythia that is (was) threatening to dominate the native plant beds I’ve cultivated. Pruning is an effective coping mechanism: The act of cutting and shaping, the growing pile of branches, all while getting a handle on intense feelings.

During the early days of the pandemic, I found stacking firewood to be calming. It was methodical and required concentration. At other times, using the electric weed trimmer on patches of stiltgrass before it goes to seed can be cathartic.

These coping methods don’t decrease the daily experiences of seeing nature run its off-kilter course, though. It can seem like every emission of carbon building up in the atmosphere is reflected in the landscape- lush, green and dying.

Is it in fact dying, though? Changing, certainly. Life is there, it’s just different life and it’s becoming more homogenous. Research bears out that there is less diversity due to invasive species competition in our forests and in the blip of 12 years that I’ve spent learning from and observing this landscape, that is certainly true.

The layered impacts of hungry deer, pests and diseases, severe storms, years of disturbance and development all exacerbated by climate change have left stands of trees in a weakened state with eroding ecosystems. Regeneration is slow or halted.

I try to avoid war metaphors in my thinking and approach. It’s more of a campaign to tip the balance back into the ecosystem’s favor where an equilibrium is maintained. The barberry and its ilk aren’t going away but maybe they can be halted and delayed from regenerating instead of the forest. Many scientific minds are set on these issues. It’s always my challenge to try to work smarter, not harder.

In the big picture of the planet, hope exists in the fact that there is still time to act and lower emissions. In my home landscape, hope exists in the pockets of promise. The sedges are growing back in the areas where we stopped mowing. The profusion of goldenrods and milkweed plants are prominent enough to self-sow more than an acre away from their first planting. The density of native plants crowds out weeds in the oldest gardens. Caterpillar-munched leaves show. And there’s a new plant to identify that might not be a nuisance.

Next month I’ll take the flame-weeding torch to the barberry. I’ll keep cutting back the multiflora rose and in time, probably years, it will exhaust itself. The bittersweet won’t be allowed to set seed. I’ll hand pull the mugwort, for now. Strategize, plan and plant. Stop to appreciate a pretty flower covered in pollinators.