The account below is taken from Benjamin Drew’s A North-Side View of Slavery. The Refugee: or the Narratives of Fugitive Slaves in Canada (1856).

Last year, in Hamilton, Ontario, Andrew Hunter, the author of It Was Dark There All the Time: Sophia Burthen and the Legacy of Slavery in Canada, was fined for hanging unauthorized signs to commemorate her.

I was born in Fishkill, New York State, 12 miles from North River. My father’s name was Oliver Burthen, my mother’s Dinah. I am now more than 90 years old. I was stolen from my parents when I was 7 years old, and brought to Canada; that was long before the American Revolution. There were hardly any white people in Canada then — nothing here but Indians and wild beasts. Many a deer I have helped catch on the lakes in a canoe: one year we took 90. I was a woman grown when the first governor of Canada came from England: that was Gov. Simcoe [in 1791].

My parents were slaves in New York State. My master’s sons-in-law, Daniel Outwaters and Simon Knox, came into the garden where my sister and I were playing among the currant bushes, tied their handkerchiefs over our mouths, carried us to a vessel, put us in the hold, and sailed up the river. I know not how far nor how long — it was dark there all the time. Then we came by land. I remember when we came to Genesee — there were Indian settlements there — Onondagas, Senecas, and Oneidas. I guess I was the first colored girl brought into Canada. 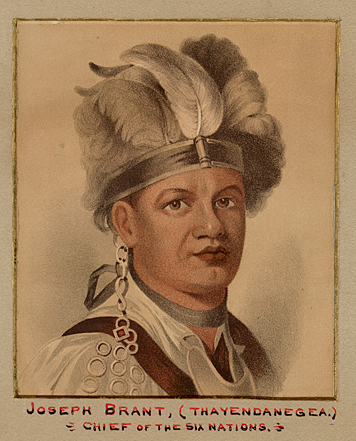 The white men sold us at Niagara to old Indian [Jonathan] Brant, the [Mohawk] king [who probably owned about 30 slaves]. I lived with old Brant about 12 or 13 years as nigh as I can tell…. While I lived with old Brant we caught the deer. It was at Dundas at the outlet. We would let the hounds loose, and when we heard them bark we would run for the canoe — Peggy, and Mary and Katy, Brant’s daughters, and I.

Brant’s sons, Joseph and Jacob, would wait on the shore to kill the deer when we fetched him in. I had a tomahawk, and would hit the deer on the head, then the squaws would take it by the horns and paddle ashore. The boys would bleed and skin the deer and take the meat to the house. Sometimes white people in the neighborhood, John Chisholm and Bill Chisholm, would come and say it was their hounds, and they must have the meat. But we would not give it up.

Canada was then filling up with white people. And after Brant went to England, and kissed the queen’s hand, he was made a colonel. Then there began to be laws in Canada. Brant was only half Indian: his mother was a squaw — I saw her when I came to this country. She was an old body; her hair was quite white. Brant was a good-looking man — quite portly. He was as big as Jim Douglass, who lived here in the bush and weighed 200 pounds.

He lived in an Indian village — white men came among them and they intermarried. They had an English schoolmaster, an English preacher and an English blacksmith. When Brant went among the English, he wore the English dress — when he was among the Indians, he wore the Indian dress — broadcloth leggings, blanket, moccasins, fur cap. He had his ears slit with a long loop at the edge, and in these he hung long silver ornaments. He wore a silver half-moon on his breast with the king’s name on it, and broad silver bracelets on his arms.

He never would paint, but his people painted a great deal. Brant was always for making peace among his people; that was the reason of his going about so much. I used to talk Indian better than I could English. I have forgotten some of it — there are none to talk it with now.

Brant’s third wife, my mistress, was a barbarous creature. She could talk English, but she would not. She would tell me in Indian to do things, and then hit me with any thing that came to hand, because I did not understand her. I have a scar on my head from a wound she gave me with a hatchet; and this long scar over my eye, is where she cut me with a knife. The skin dropped over my eye; a white woman bound it up. [Here Drew interjects: “The scars spoken of were quite perceptible, but the writer saw many worse looking cicatrices of wounds not inflicted by Indian savages, but by civilized (?) men.”]

Brant was very angry when he came home, at what she had done, and punished her as if she had been a child. Said he, “You know I adopted her as one of the family, and now you are trying to put all the work on her.”

I liked the Indians pretty well in their place; some of them were very savage, some friendly. I have seen them have the war-dance — in a ring with only a cloth about them, and painted up. They did not look ridiculous — they looked savage, enough to frighten anybody. One would take a bowl and rub the edge with a knotted stick: then they would raise their tomahawks and whoop.

Brant had two colored men for slaves: one of them was the father of John Patten, who lives over yonder, the other called himself Simon Ganseville. There was but one other Indian that I knew who owned a slave. I had no care to get my freedom.

At 12 years old, I was sold by Brant to an Englishman in Ancaster, for $100. His name was Samuel Hatt [a former Loyalist captain], and I lived with him seven years: then the white people said I was free, and put me up to running away. He did not stop me — he said he could not take the law into his own hands. Then I lived in what is now Waterloo. I married Robert Pooley, a Black man. He ran away with a white woman: he is dead. 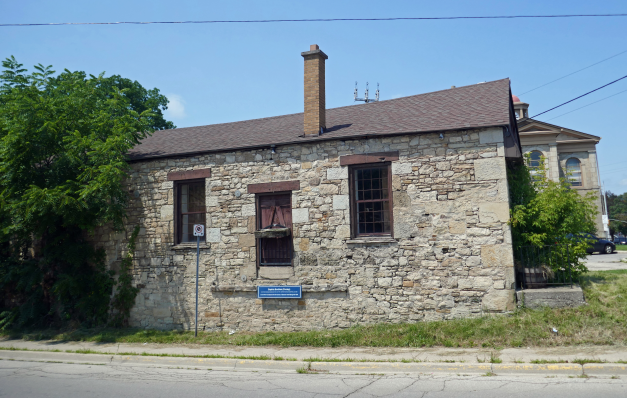 The Hatt home in Ancaster, Hamilton, Ontario, where Pooley was enslaved at age 12, with a blue commemorative sign attached by Andrew Hunter

Brant died two years before the second war with the United States. His wife survived him until the year the stars fell. She was a pretty squaw: her father was an English colonel. She hid a crock of gold before she died, and I never heard of its being found. Brant was a freemason.

I was seven miles from Stoney Creek at the time of the battle [a British victory over American forces during the War of 1812] — the cannonade made everything shake well. I am now unable to work, and am entirely dependent on others for subsistence: but I find plenty of people in the bush to help me a good deal.