Seeking answers to Route 9 traffic problems, the Philipstown Town Board last week decided to consult the state and a planning expert, opening the door to possible zoning changes.

On June 2, three members of the Planning Board raised the issue at the Town Board’s formal monthly meeting in Town Hall.

Neil Zuckerman, who chairs the Planning Board, said development applications had increased significantly during the pandemic, fostering “a growing observation that Route 9 has become a heavily trafficked road, far more than we had anticipated and far more, I think, than our own code would have predicted.”

He cited several projects that have major commercial activity, semi-trailer trucks making pickups and deliveries or large volumes of traffic.

Route 9, which is a state highway (and was a colonial British road before the American Revolution), runs the length of Philipstown, where it is two lanes. It widens to four or more lanes in Dutchess and Westchester counties.

Zuckerman said that the Planning Board must consider each proposed development and its traffic implications separately, not as part of a series of projects with a cumulative effect on surroundings. The board also must weigh property rights against community rights — “a tough balance,” he said — and carry out town policy. The zoning code “may have some areas where it needs some thinking,” he said.

Krystal Ford, the Climate Smart coordinator for the Town of Philipstown, cut the ribbon on June 2 with members of the Town Board to open two electric vehicle charging ports at Town Hall in Cold Spring. The stations were funded with grants from the state and Central Hudson, Ford said. The cost is $1 per hour, with a limit of four hours. At the meeting that followed, the board accepted Ford’s resignation as Climate Smart coordinator and as a member of the Conservation Board. She and her family are moving to the Adirondacks. 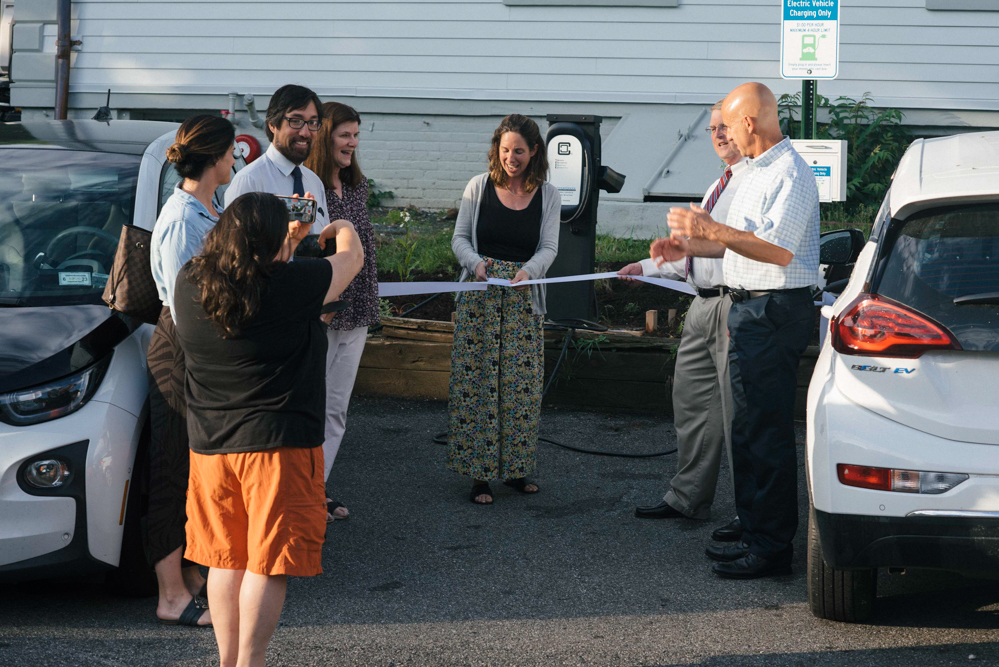 Stephen Gaba, the town attorney, called it “a complex problem,” with limited solutions locally. He said the Planning Board can control entry and exit from intersections onto Route 9, while the Town Board could change the zoning code to restrict projects that generate heavy traffic or involve frequent arrivals and departures of trucks. However, when it comes to “commuter traffic, there’s nothing you can do,” he said.

Supervisor John Van Tassel said it’s unclear whether Route 9’s traffic is local or from commuters driving between Westchester and Dutchess. In any case, said, “I don’t think that we, as a community or town board, can stop it.”

Even if development along Route 9 ceased, heavy out-of-town traffic from commuters might continue, he said. Further, he said, owners have a right to develop Route 9 parcels with Planning Board approval. “They shouldn’t be penalized because there’s commuters utilizing Route 9,” he said.

Both the town and planning board members mentioned Route 9’s traffic hazards. “It’s been hellacious, the worst of the worst,” said Van Tassel, a veteran first responder.

Heidi Wendel, a Planning Board member, recalled that Route 9 residents told the Planning Board that “they were scared for their lives to come out onto Route 9. It’s a dangerous piece of highway,” where a bicyclist was recently killed, she noted.

An avid cyclist, Van Tassel said that he no longer rides on Route 9. He proposed further talks with the state Transportation Department but doesn’t want it to respond to traffic congestion by widening the road.

“I’m just concerned that the more we stir the pot, it’s going to create that,” he said. “I’m afraid of the solution being something we don’t want. The nature of the community would be different with a four-lane highway.”

Wendel urged town officials to not “lie low and be quiet. I don’t think we should not do anything because we’re afraid [the state] may subject us to a four-lane highway,” she said. “We should not operate from fear.”

2 thoughts on “Town to Seek Solutions to Route 9 Woes”