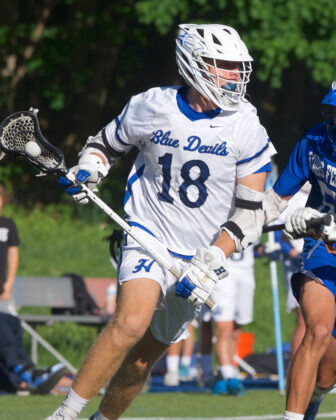 The Haldane team had a strong season, finishing 11-8 and reaching the Class D quarterfinals.

“Five of the six are freshmen or sophomores,” noted Coach Ed Crowe said. “We couldn’t have asked for a better season.”

Colin August, a senior attacker from Garrison who attends O’Neill High School in Highlands Falls, was named to the second team of the Section IX All-Stars among smaller schools, selected by coaches. He will play next year for Hartwick College in Oneonta. 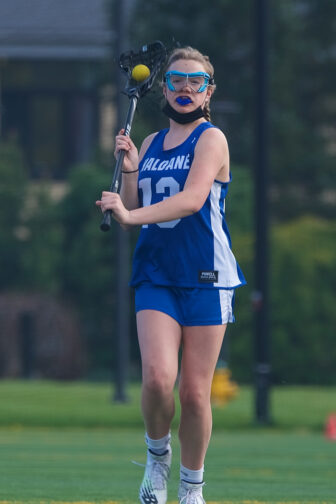 Haldane fielded a girls’ varsity lacrosse team for the first time. Playing under Coach Keri Dempsey, the team recorded five wins and reached the playoffs, losing to Briarcliff in the first round.

“Our captains did a nice job,” Dempsey said. “They were rocks for the team, especially with a first-year program.”

For Beacon, attacker Anaya Camacho was named to the first team of the Section IX All-Stars among smaller schools. Defender Madeline Bobnick and midfielder Kasey Senior were named to the second team, and defender Gabby Kuka received honorable mention.

Freshman pitcher and first baseman Jake Hotaling was named to the All-League team for Haldane, which fought larger schools all season and finished with a loss in the Section I, Class C semifinals.

“Jake is an incredibly talented and hard-working ballplayer,” said Coach Simon Dudar. “The great success he had as a freshman this year has only left him hungry to start working on having an even better sophomore season.”

Tyler Haydt, a senior at Beacon, on Monday (June 6) committed to play next year for St. Thomas Aquinas College in Sparkill, where he will study finance. 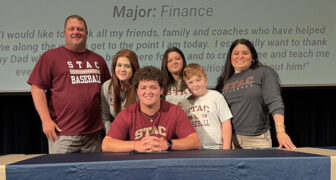 In the Section I state qualifier on June 2 and 3 at Arlington High School, Parrella was second among Division 2 competitors in the 3,000-meter steeple chase in 10:31.9; Vasconcelos finished sixth in the triple jump in 30-05.50; and Holmbo was ninth in the high jump in 5-06. 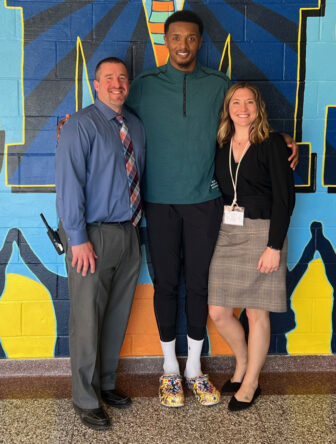 Elijah Hughes, a guard with the Portland Trail Blazers whose family lives in Beacon, visited Rombout Middle School recently. Hughes attended Beacon High School as a freshman and sophomore, and his mother, Penny, is a former teacher’s aide in the district. Hughes spoke to the students about the importance of working hard and posed for photos and signed autographs. He is shown with Principal Brian Soltish and Assistant Principal Cathryn Biordi. (Photo provided)

Mary Mikalsen, a junior at Haldane who played for Putnam Valley this season because the Blue Devils did not field a varsity team, was named to the All-Section team.

Leanna Rinaldi of Beacon committed on Monday (June 6) to play next season for King’s College in Wilkes-Barre, Pennsylvania, where she will study engineering.

Dan Cowan, who was hired as the Haldane athletic director in 2021, will leave the position on June 30, the district announced.

Before he came to Haldane, Cowan was a teacher and administrator for the Hyde Park district for 17 years; he will return to the district as an assistant principal at Roosevelt High School. Cowan succeeded Chris Salumn, who left to become the athletic director for the Carmel district.

“Coming to this decision was not easy but was made with my family’s best interest at heart,” he said on Thursday (June 9). “Although I know this change may come as a shock for Haldane, I believe the coaches, faculty, and staff will adapt and continue to provide the best education and athletic experiences for Haldane students. I am grateful for the opportunity and the experience gained this past school year and wish all of the Haldane students, student-athletes, coaches, faculty and staff all the best in the upcoming school year.”