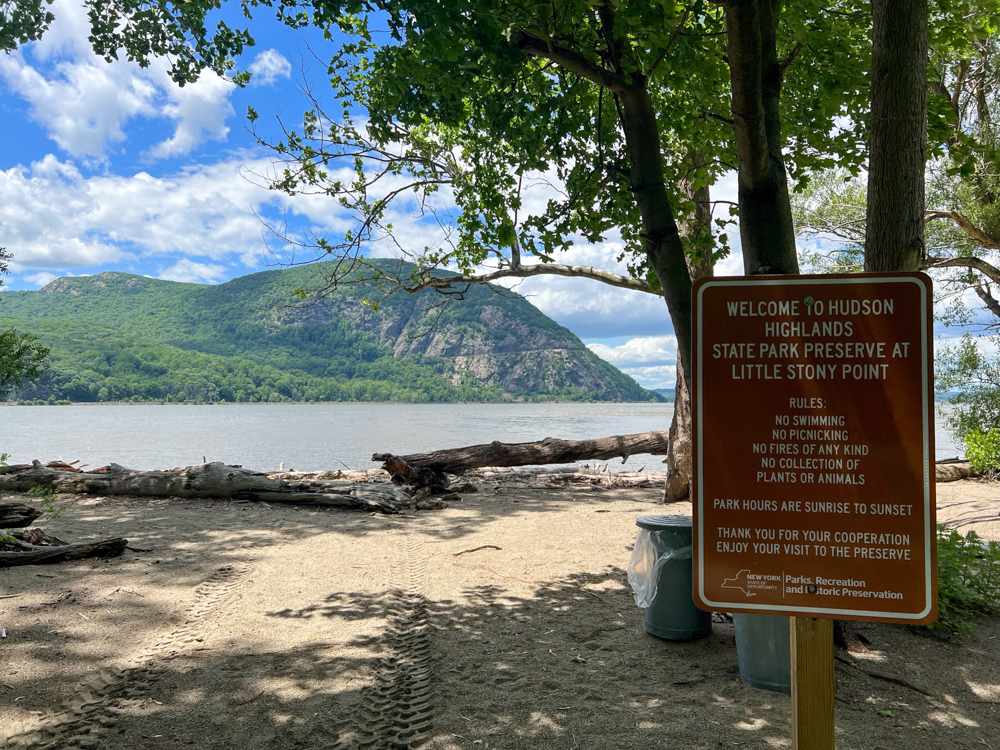 Pete Seeger had hoped that Little Stony Point would someday be an official swimming spot on the river. (Photo by B. Cronin)

As an environmental reporter, the most common question I get asked — right after “What animal did this?” followed by an emailed photo of a pile of scat — is, “Is it safe to swim in the Hudson?”

It depends on what you mean by safe.

In the 19th century and early 20th century, that question would have seemed preposterous. Millions of people cooled off with a dip. But as factories were built on the Hudson, the river became an open sewer. Paint poured in from the General Motors plant in Tarrytown, oil from railroad repair facilities in Croton and human waste from Manhattan. A resident who taught himself to sail along the Peekskill shore in the 1960s told me that anytime he fell in, he had to wipe sludge from his clothes.

But you can’t swim in the same river twice, and a lot has changed in 50 years since the passage of the Clean Water Act, which required municipalities to upgrade their sewage treatment plans and tightened the regulation of industry pollution. Folk singer Pete Seeger, who lived in Beacon, founded Clearwater to encourage people to see the river as a public resource teeming with life rather than a dirty joke.

Science and culture changed with the tides. In 2015, members of the Croton-On-Hudson Police dive team conducted a training exercise at the site of a dock destroyed 50 years ago at Lewis Engel Park and confirmed that the debris had washed away, posing no underwater threats to swimmers. That same year a group of high school students working with Riverkeeper tested the water and found that it was clean enough for swimming, most of the time.

Dan Shapley of Riverkeeper says that about 80 percent of its samples taken on the Hudson meet federal standards for swimming. While the environmental group publishes the results of its sampling at riverkeeper.org, Shapley advises not swimming a day or two after a heavy rain because many municipal sewers overflow into the river.

Shapley says he and his family like to swim near Sojourner Truth Ulster Landing County Park during low tide, when the water is shallow and the current is gentle. But there’s no lifeguard, and Shapley says that anyone asking if it’s safe to swim has to consider that as well as water quality.

In 2005, the state Department of Environmental Conservation identified potential spots for swimming facilities and what they would cost. Little Stony Point just north of Cold Spring made the list: The DEC said it would require a $600,000 investment and $30,000 annual operating budget to add the park to the small number of public swimming sites on the Hudson. (As of now, there are five.)

The scenery at Little Stony Point is stunning, and locals have enjoyed swimming at Sandy Beach for generations. In the 1980s, Seeger suggested a campground with lifeguards but the idea crashed with the stock market in 1987. “All the money that was going to go to it disappeared,” said Evan Thompson, manager of the Hudson Highlands State Park, of which Little Stony Point is a part.

Although people do go into the water, swimming at Little Stony Point is not allowed. “We’re not trying to be mean,” says Thompson. “We’re trying to keep people safe.” The placid appearance masks dangers that have led to drownings, including as recently as last summer.

The first danger is the current, Thompson says, which can be hard to gauge. Anyone who sits on shore in early spring, when the ice begins to break up, will get a clear sense of how fast the current moves. “The ice floes go by at 20 miles per hour,” Thompson notes. “There’s no way anyone can swim against that.”

The second danger is depth. This stretch of the river is known as World’s End because of a vast underwater canyon that makes it the deepest part of the river. It begins with a steep drop-off — imagine Breakneck Ridge, inverted — that starts along the shore and bottoms out at depths of more than 100 feet. People who can’t swim will wade into the water, assuming it won’t get too deep, then drop off the edge of an underwater cliff and never come back up.

Thompson says that the area’s surging popularity with hikers since 2005 makes the idea of turning Little Stony Point into a sanctioned public beach unlikely, in large part because of a lack of parking.

A few miles north, the River Pool in Beacon — also championed by Seeger — is one of the five sanctioned swimming spots on the river, inspired by similar pools in Manhattan, although it will be closed this summer. (The other spots are in Saugerties, Ulster, Kingston and Croton.)

“We’re trying to improve the flotation,” explains Alan Zollner, a member of the River Pool board. “Some of the wood inside the seats in the entry platform has gotten waterlogged.”

There are official swims happening this summer that can get you in the river. On Sunday (June 19), the annual, seven-day 8 Bridges Hudson River Swim will begin, with swimmers covering the 120 miles from the Rip Van Winkle Bridge to the Verrazano Narrows Bridge.

“It’s a journey from rural to urban; sweet water to saltwater,” said David Barra, the co-founder of New York Open Water, which partners with Riverkeeper to run the event. “It’s epic and life-changing.”

Public access hasn’t gotten any easier on the river since the first 8 Bridges Swim in 2011, Barra says. “Waterfront development continues without any consideration for swimming access,” he says. “Even obtaining permission for loading and unloading small boats for swimmers is overly bureaucratic and restrictive.”

In addition, on July 30, boat traffic will be stopped for the mile-long Great Newburgh to Beacon Hudson River Swim. The annual event, now in its 18th year, raises money for the River Pool.

“There’s an incredible connectedness that the swimmers have when they come out of the water,” says Zollner. “People undertake this swim to commemorate birthdays and cancer recoveries. And they come out so exhilarated and proud.”

2 thoughts on “Out There: Swimming in the Hudson”